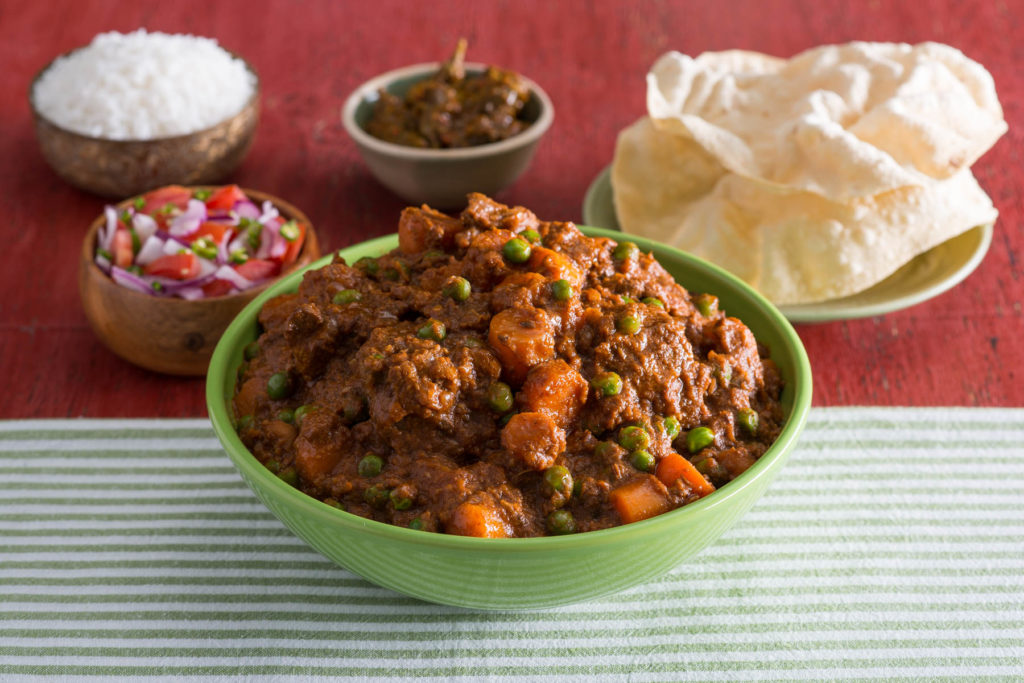 Traveling across South Africa, Ishay Govender-Ypma goes in search of a curry that defines the nation. Written for Fine Dining Lovers.

Is there one definitive dish that South Africans love and prepare? It’s common knowledge that the country comprises a variety of cultural, ethnic and religious groups, with as many languages to match. One popular belief (and it is true to a large extent) is that South Africans love to braai (barbecue). The ingredients used, preparation methods and fuel – wood or gas – may differ, as do the tastes and the aromas, but the generally great weather and a love of the outdoors, has us at the grill quite often. I set out over the span of a year and a bit to visit each of the nine provinces, and the home cooks loved by their communities, not in search of charred lamb chops and savoury, smokey burnt ends, but in search of curry. The end result is Curry: Stories & Recipes across South Africa, an anthropological overview into a diverse range of homes, backgrounds and recipes for curry.

I’ll release a spoiler and say that there are as many curries as there are cultural groups living in this land. However, the history of indentured servitude and slavery has informed and influenced the cuisine in large tracts of the country. In many instances, because movement across the terrain has been difficult – the country is large and the oppressive segregation laws of the past under apartheid ensured that people remained within communities based on racial groupings – the food customs remain intact, with recipes very close to the original versions. Take the west coast, where the Dutch, under the Dutch East India Company (VOC) who were involved in trading along the spice routes, established a victualing station in the Cape in 1652. Slaves from Ceylon, Indonesia, Batavia, Java and Madagascar, who became known as the Cape Malays (a term still used today), were brought in by the VOC to serve the Dutch. The Cape Malay cooks who worked in the kitchens, using their array of spices like turmeric, cinnamon, cumin, coriander and chilli, transformed the palates of the Dutch and the region, though tempering the heat levels for their masters. To this day, Cape Malay cuisine, including these particular types of curry, known as the Cape Malay curries – less red and less spicy compared to the curries of the East coast – but robust and deeply flavored, is known as the defining food of the Cape. Popular Cape Malay curries include chicken, crayfish, lentils, beans and mutton or beef curries. 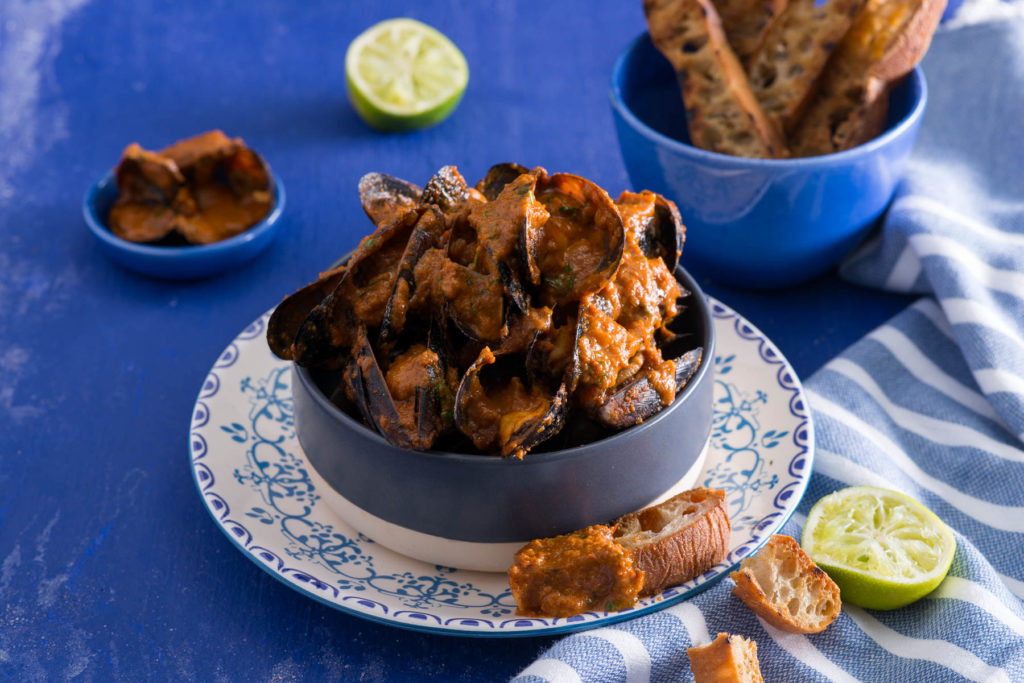 Along the east coast, in the province of KwaZulu-Natal where indentured labourers from the south of India arrived to the port in Durban from 1860 until 1911 – this region is known for the Durban curry, a rich red, slightly oily and very spicy curry that has it’s roots in Chennai and the south of India. Many describe the heat to be linear in profile – fiery from the first bite. Unique Durban curries include fish, crab, dried fish, sugar beans, tripe, trotters and jackfruit curries. While coconuts were available to the newcomers, it was not in the sort of quantity that southern Indians are accustomed to and thus, coconuts were not used in the cooking, but rather reserved for special occasions and prayer ceremonies. Adaptation has been a crucial element for survival for the descendants of the Indians and the Cape Malays alike. Crushed corn (known as mealie rice) was boiled and served as a starch when rice was a luxury item, local tubers like the madumbis, a type of African yam were used, as were local bean varietals. The curries prepared by the Indian merchants from Gujarat, who arrived here to trade and lived in conditions different to the indentured Indians, maintain a similarity to the foods eaten in Gujarat. Constant travel to visit their families back in Gujarat and an abundance of spices and vegetables from the Motherland have ensured the survival of this type of curry here in South Africa. Many Gujaratis (particularly of the Hindu faith) are vegetarian and their popular curries include potato and pea, green bean, eggplant, cauliflower curries and dhals made with mung beans or other lentils. 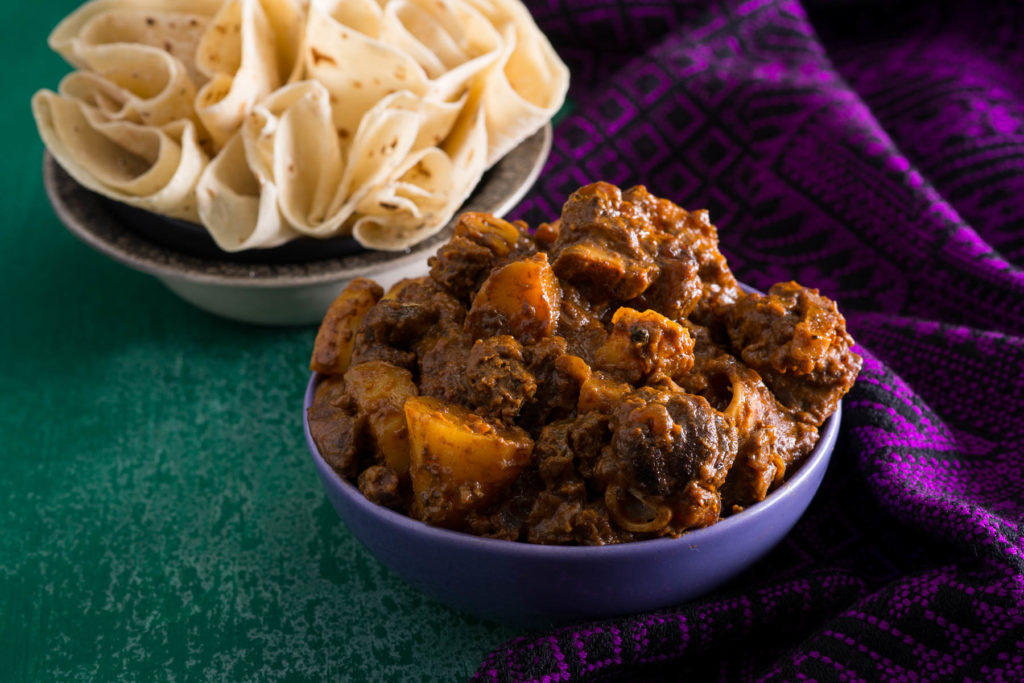 Though mingling between communities was regulated by the state until 1990, there has always been a trading of ideas, sharing of cultural practices and inter-marriages, resulting in food customs being shared. As a result, curry spread through the provinces and was adapted according to the ingredients and spices available. In towns and townships where there were no spice traders and Indian merchants, the curry powder mixes sold in boxes rose in popularity for the convenience and the cost factor – there’d be no need to purchase a wide variety of individual spices. Curry powder is a British construct, invented during the time of the British Raj in India around 1784. At a stage it was sold at the chemists in the U.K, marketed as a cure for indigestion, mental fatigue and flagging libidos. The key ingredients at one point were fenugreek and turmeric and the aim was to mimic the arrangement of spices in a complex Indian masala (mix), usually roasted and ground from scratch by Indian cooks.  In South Africa, Cartwrights  and later Pakco and Rajah became the popular curry powder blends, used in the iKasi (township), Afrikaner and what is known as the “Colored” (mixed-race) curries, which tend to be mild and sometimes sweet. Chicken, offal, beef, minced beef and seafood curries (along the coast), feature across this broad section of the population.

And then there are the curries brought in by the new wave of immigrants today – Pakistanis, Bangladeshis and others from Africa who come to South Africa to seek out new opportunities, much the way many of our ancestors have.

It is hard to claim that there is any one dish, even the beloved braai [barbecue], that is universally adored by South Africans above all others. One recalls fondly, how Nelson Mandela often spoke about his love of curry – he was a frequent visitor at the legendary  (and sadly long-closed) Kapitan’s in Newtown, Johannesburg. I am, however, willing to wager, that a plate of spicy curry dished up from a steaming pot, with a ladle of warm pap or rice and a side of vinegary kachumber salad, must come close.

You can find Curry: Stories & Recipes across South Africa here. 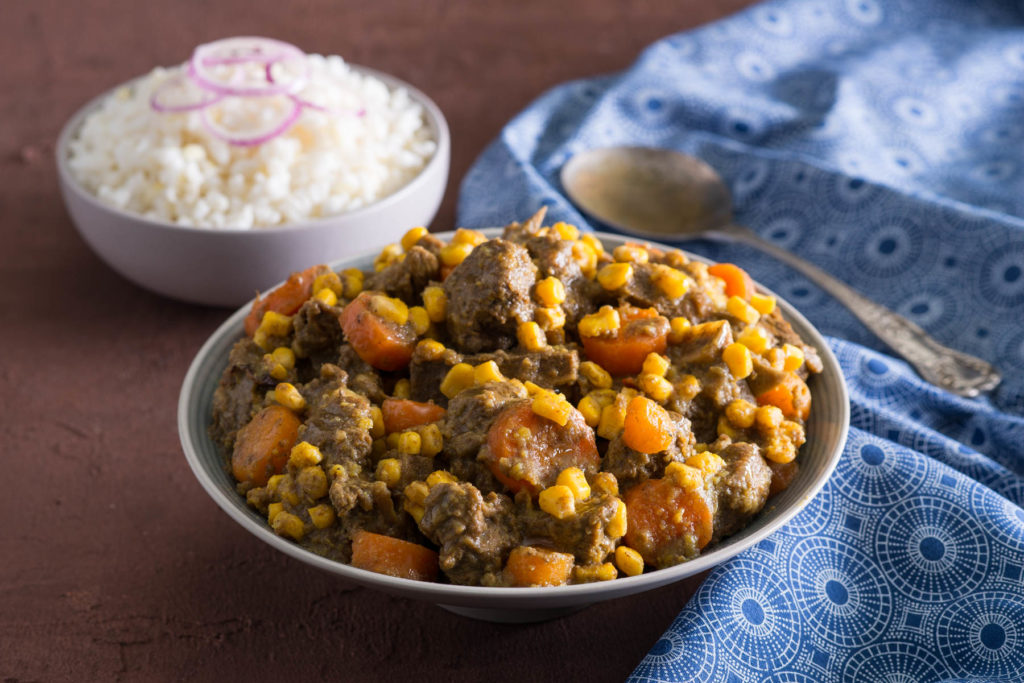