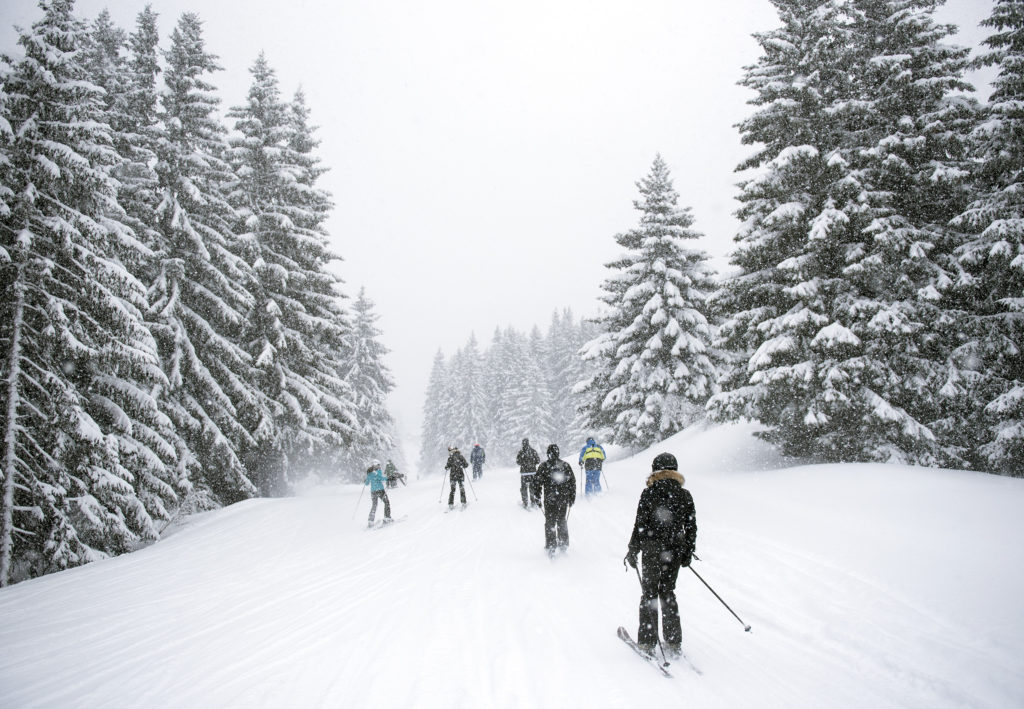 It’s in Megève, in the Rhone Alps that I experience a proper snowfall for the first time – fluttery, papery, ice-cold and delicious. For a moment it feels as if I’m inside a snow globe. Picture this: we’re trying to find a parking in the cordoned-off town centre, and a thirty-something (that would be me) leaps out of the passenger seat, pirouetting with joy. A driver honks the horn irritably. The flakes drift as if slow motion, sifted from the grey-white sky, ethereal and feather-light, carpeting the rooftops and ground. I scoot back into the car. Previous end-of-year trips to Europe were never quite able to produce the white winter wonderland. February, it turns out, is the ideal time to experience a fairy-tale winter, and by the looks of the ever-growing number of families lugging ski poles and toddling on ski shoes over the week, high season is approaching. The ski-resort town of Megève, made famous by the Rothschilds in the 1920s, sits in the shadow of Mont Blanc, and while I’ve been lured here to the slopes, it’s the promise of hearty French Alpine food that gets my heart racing. Après ski, I learn, is more than just a cold beer or the local vin chaud (warm mulled wine similar to gluhwein). 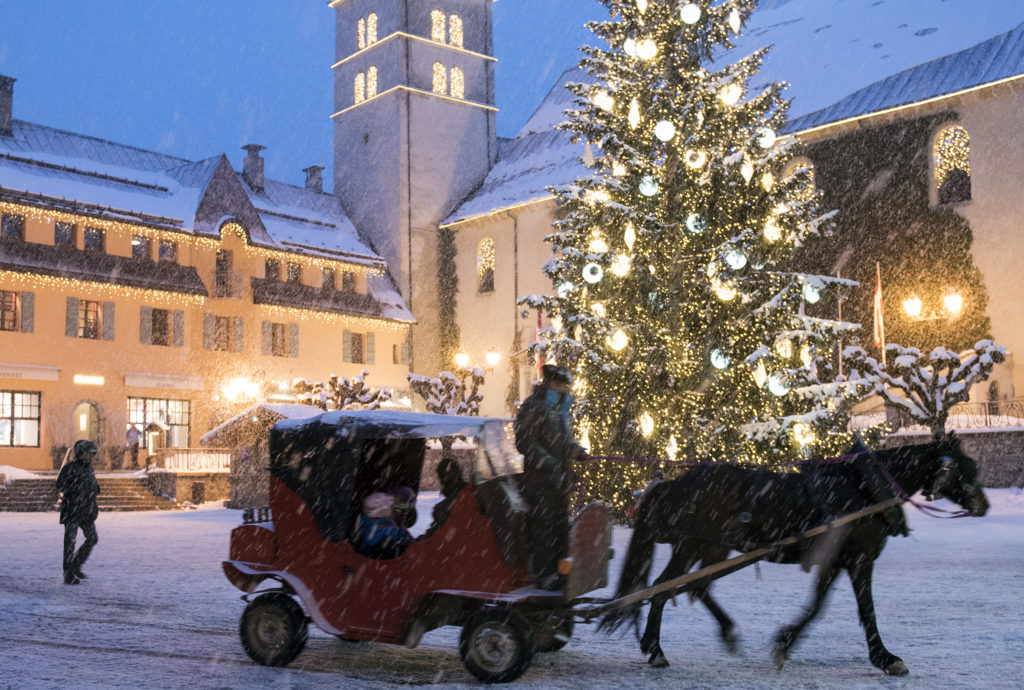 The Haute-Savoie in Eastern France borders both Italy and Switzerland and is known for its crystal-clear lakes and the verdant valleys that dip and peak. Here, cows graze on lush green grass in the warmer months. The unique terroir produces not only the distinctive crisp white Savoyard wines, but also a bounty of cheeses like Tomme and the firm, sharp Comté and Beaufort. While neighbouring Switzerland has the global reputation for excellent fondue using hard-rind cheeses like Gruyère, perfected by the Swiss farmers, historians can’t pinpoint where it originated first. Geographically, it makes perfect sense that knowledge of cheese-making techniques was shared across borders. Needless-to-say, the Savoyard fondue is generally made by slowly melting the very fine French Alpine cheeses: Comté and Beaufort with a little regional white wine, or water in some villages, in a pan called a caquelon over which a clove of garlic has been rubbed.

Post-ski runs and adventuring are rewarded by dunking a basket of day-old bread chunks in fondue that is stirred with a small ladle over a flame until the last crusty cheese layer, known as the religieuse (or nun) remains. At the core, it’s a basic dish – cheese, bread, and a splash of wine – but it’s the communal act of swirling a fork with bread into the pot of melted cheese with someone else that elevates the fondue.

Cheese appears in many of the signature Savoyard specialities. Consider tartiflette, a dish of potato slices made with cream, crisp lardons and swaddled in Reblochon cheese. Brown on the top and creamy inside, it’s also made with thick disks of chèvre or goat’s cheese. Before I travel to Megève, I start at Annecy the capital of the region, widely known as “Venice of the Alps” for its canals and paint box-coloured buildings. The rotating market is the perfect opportunity to meet local producers and purchase ingredients for a picnic. And since the ground is covered in snow, we opt for a bed picnic of bread, sausage, wine and cheese. 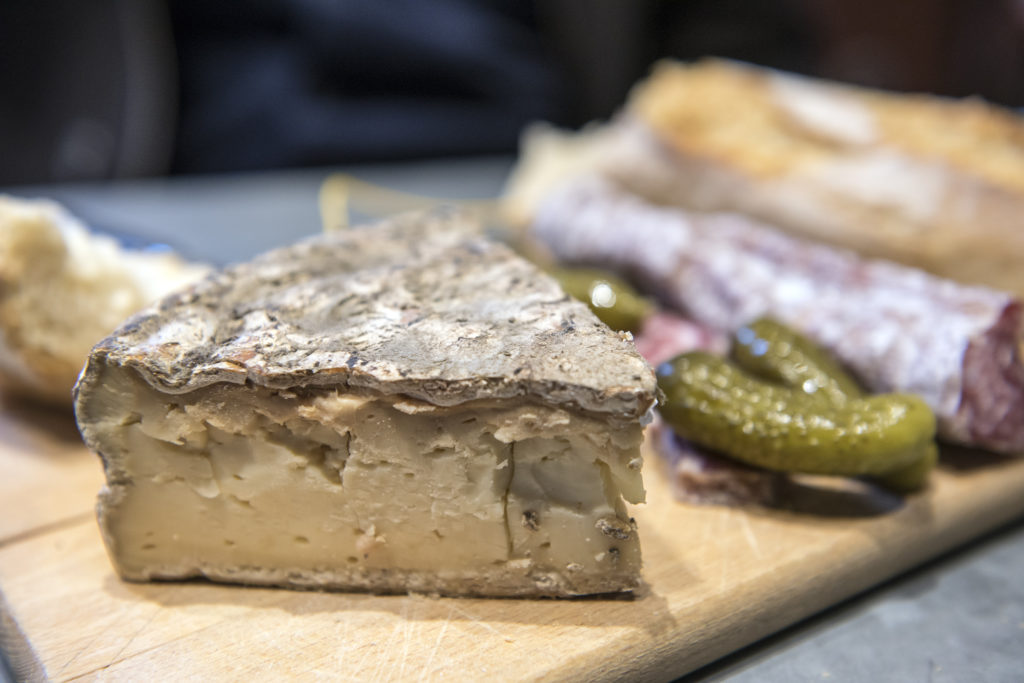 For lovers of cheese, there are ever-higher heights to aspire to. Take, for instance, the knee-weakening cheese cart decked with layers of local varietals, like the one at two-star Michelin Restaurant Yoann Conte in Veyrier-du-lac, formerly the kitchen of beloved French chef Marc Veyrat. And then, at its simplest, there is warm, melted raclette. Semi-firm Raclette, a cow’s milk cheese is suspended from an electric metal contraption. This, too, is post-snow slopes food, and after an afternoon of snowshoeing in Megève, I order the raclette at L’Alpage, decorated like an Alpine mountain hut – pale wood and soft, golden lighting. I manoeuvre the element closer to the cheese and scrape it, oozing in ribbons with a metal spatula. This, we use to smother ingredients brought on an accompanying platter: bread, boiled fingerling potatoes, cornichons, charcuterie and pickled onions, until the wedge disappears. The diners next to me, a family with two strappy teenage boys, cheeks ruddy from a day of adventure, grill thin slices of beef, veal and chicken on a pierrade or “hot stone” at the table, the smoke lifting in pleasant curls. I make a note to try it for dinner the next night. 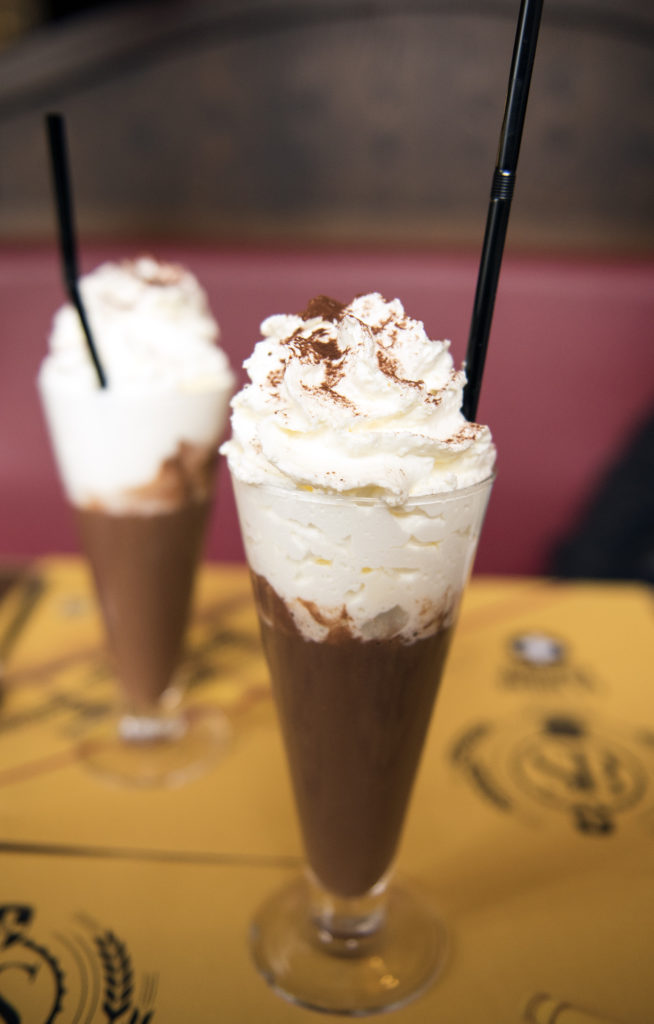 Chocolate Rescue in a Mug

I spend the days snowshoeing in the pristine Megeve slopes. The skiers look at us and the Nordic skiers with their skinny skis and determined strides, with amusement and just a little pity. But speed isn’t for me and I want to take in the environment at leisure. It’s fairly easy to snowshoe – you clip your hiking boots into the plastic “shoes” and walk with a wider stride than usual, placing the poles behind you, at an angle as you move forward. Going uphill, depending on the angle of the slope does require patience and leg strength.  “If you can walk, you can snowshoe immediately,” says Bruno our guide. In spite of constant clearing, there are parts where the snow comes all the way up to our knees as we trudge forward as if in treacle. Long gaters worn over ski pants become valuable here, as do sweat-resistant thermal body wear, a warm bandana that blocks the wind between your jacket and your neck and face, and goggles. On one particular day when we are snowshoeing without a guide, snow swirls thickly in the wind pummelling my face and my goggles fog up constantly. I motion that we get to the nearest ski lift, at least 30 minutes away. It’s another 20 minutes to the bottom when we get to the lift, but to the right, a flicker of hope. A mountain restaurant that offers respite, and large mugs of hot chocolate.  Chocolat chaud à la Viennoise, or hot chocolate, usually made from real dark chocolate and topped with Chantilly cream is a boon for the cold and hungry. And the cosy ski restaurants usually serve all the local Savoyard specialities from tartiflette, to fondue and rich, cheesy pastas. But today is the day for a stack of warm crêpes. While eaten all year round, none are as comforting as the crêpes swathed in melting Nutella, eaten on the slopes. 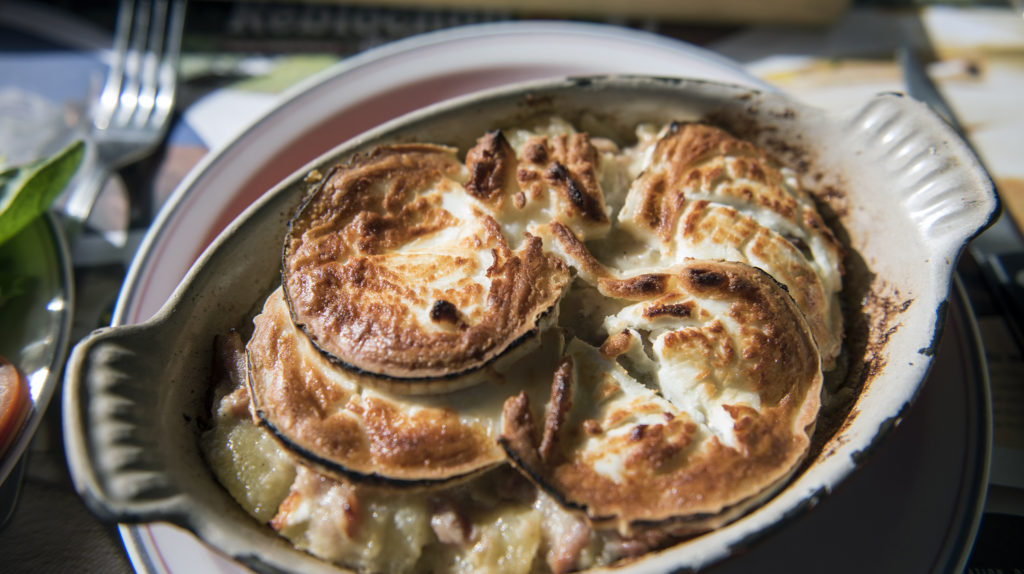 We opt out of all strenuous activity the next day, and venture to the village of Leutaz and to Falcons de Sel, a three-star Michelin with a bright, contemporary dining room and a chef known for his skiing and foraging skills, who invites every guest into his kitchen after their meal. Much later, after a steam in the sauna, we sit near a roaring fire drinking crisp white wine and contemplate a summer time hike around Mont d’Arbois, knowing full well that it would not hold the same appeal as a February wonderland of snowmen, powdery flakes and rich Savoyard meals.

1 clove garlic, cut in half

1 cup mild white wine (Chenin or unoaked Chardonnay will do)

4. Season with pepper and serve with pieces of bread, small gherkins and pickled onions.

Mike Beaudet or “Megève Mike” as he’s known has an excellent reputation for English-speaking instruction in the area, and has assembled an awesome team that tutors children and adults in skiing, snowboarding and can guide you on mountain hikes and snowshoeing treks in the area: 192 Route du Téléphérique, Megève,

TIP: You can hire skis, ski poles, ski shoes and snowshoeing equipment at the resorts, and store everything in lockers for a fee. It’s best to go with your own clothes, socks, gaters and well-fit thermal wear, as they are pricey at most of the resort towns and often out of sizes in high season. Purchasing a weeklong ski pass is much cheaper than a daily card.

Visa: South Africans require a visa for France, and a multi-entry Schengen is useful if you intend to visit nearby Switzerland and Italy.