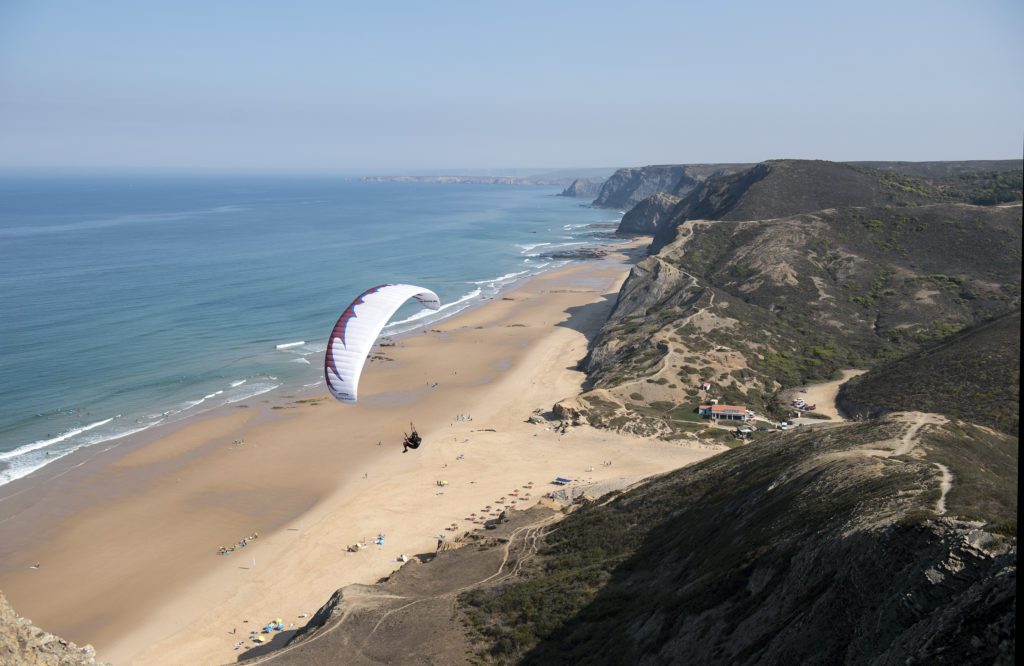 From atop of the ragged schist cliffs of Praia do Castelejo near Vila do Bispo in the western Algarve, a paraglider launches, with long strides and a short run-up. He lifts off and floats over the golden sands below, a circle of surfers stretching in downward-facing dog on their boards before they charge into the pulsing, icy waves of the Atlantic. His friend leaps over the rocks near me, documenting it on a GoPro, while his family – a woman and toddler – cheer from across an impressive, kitted campervan. He lands smoothly, running as if in slow motion on the sand parallel to the cerulean-coloured ocean, to raucous hoots and clapping. From up here, the Algarve, southern Portugal’s 200-kilometre stretch of coastline, seems remote and wild, a far cry from the bar-strewn streets and beach clubs full of sunburnt tourists we’ve come to expect from news reports.

It’s October and the traditional groups of vacationers have left, but the sun remains and my husband and I take advantage of the fairly empty beaches and quieter roads to drive coast-to-coast from Arrifana in the rugged west to Vila Real de Santo António, the closest town to the Spanish border in the east. Our goal? To feast our way, on a modest budget, through the popular Algarvian dishes and seasonal fruit and vegetables for sale at the produce markets and corner shops. Grilled sardines, refreshing octopus salads, garlicky clam-filled tomato stews and freshly squeezed pomegranates fill our days and provide sustenance. Along the way there are famed Michelin-starred restaurants like Vila Joya in Albufeira, but it’s the homely tascas (taverns), marisquerias (seafood, by-the-kilo restaurants) and adegas (wine taverns) that we find irresistible. 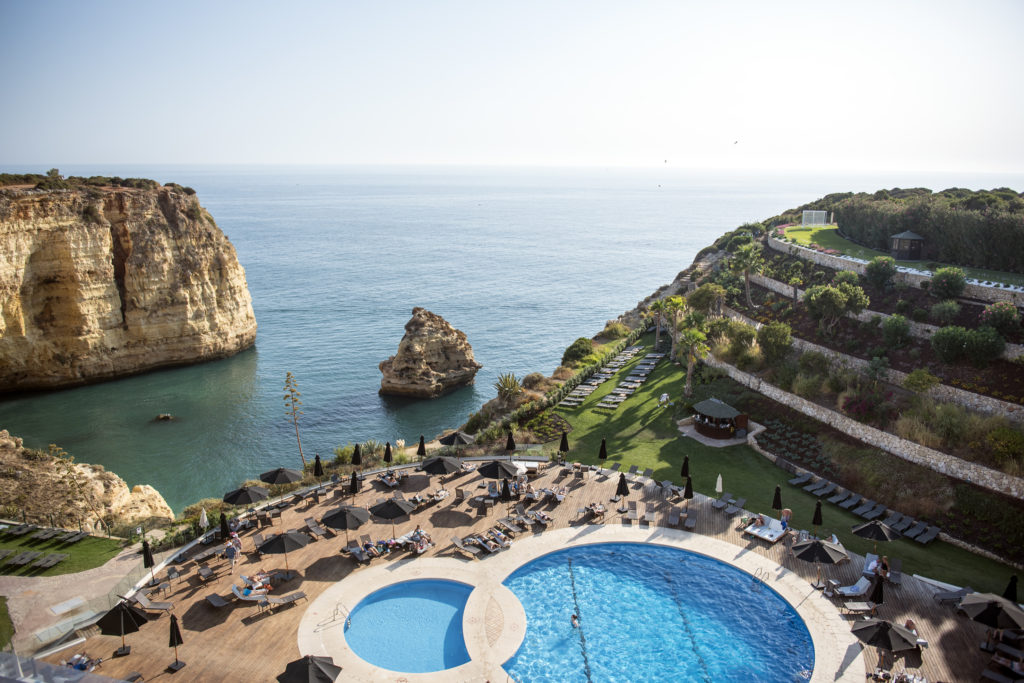 Many southern Portuguese descendants say that Moorish roots are evident in their skin and hair colouring, a darker hue compared to their northern Portuguese counterparts. Our friend, food journalist Célia Pedroso, whose family hails from the region, agrees. In fact, all through the Algarve, and Portugal, we see evidence of the historical and cultural Islamic influence prevalent in the cuisine and architecture. Like it is with oranges, rice, coriander, carob, dried apricots, raisins, sugarcane and saffron in the Mediterranean, almonds are attributed to the almost 400-year Islamic reign of what was once known as Al-Gharb – “the west”, or west of Andalucía, with Silves as the capital. “My grandfather was from Silves, the former capital of the Algarve,” Célia says. “And I have memories of the beaches without anyone except the fishermen. Of course, that Algarve doesn’t exist anymore.” 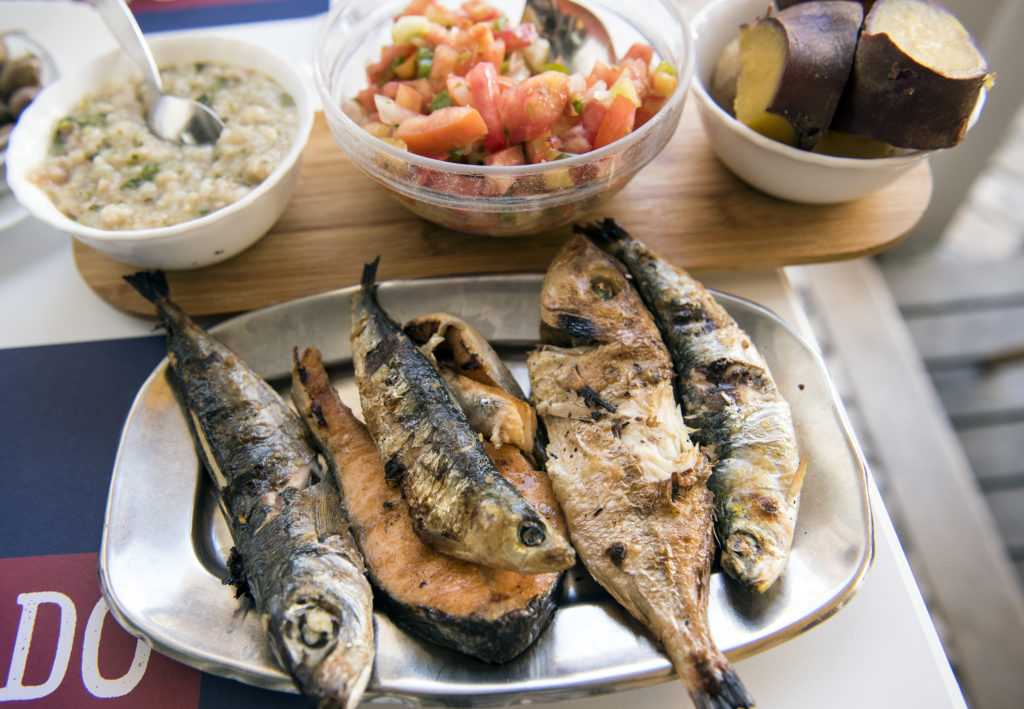 A mix of North African Berbers or “Moors” and Middle Eastern Arabs brought a new system of agriculture to southern Portugal, and the article “al” in names like Alentejo, Alfama, Aljezur and Algarve. Célia tells us about the almonds grown in the area that she prefers to use for baking. It’s hard to imagine Portugal without almonds – I think of the dense though delicately-formed intricate marzipan treats and almond flour cakes and pastries loved around the country. It’s said that the spring almond blossoms, a snowy blanket of white and marshmallow-pink that cover the Algarvian countryside, were a gift to Gilda, a Nordic princess, the wife of the young Moorish prince, Ibn-Almuncim, to remind her of the winter wonderland she missed dearly. 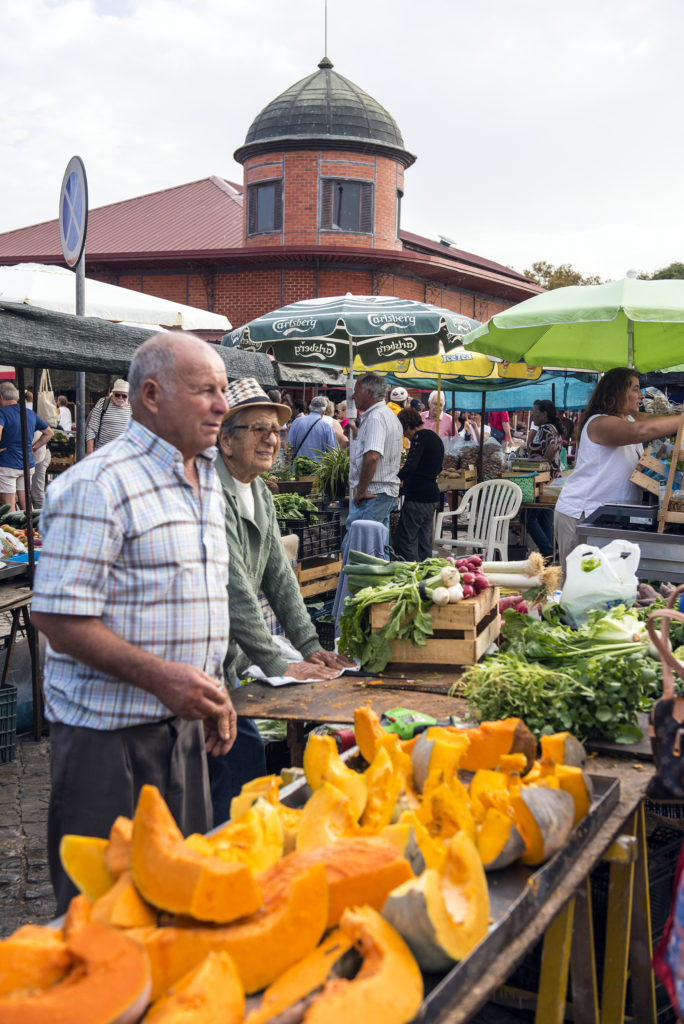 Fresh off the Grill

Walking through the old quarter of the fishing town Olhão, in the eastern Algarve, the tell-tale maze-like configuration of the skinny flat-roofed cubic houses bear traditional Islamic architectural traits – the roofs were used for drying fruit and nuts, and for gathering in the evenings, with bold geometric azulejos (ceramic tiles) covering the houses’ facades. It’s in this part of town that we find Vai e Volto, an awning-shaded outdoor restaurant that serves just one thing – fresh grilled fish. The fish – sardines, salmon, mackerel and whatever else is caught that day, is served with crusty bread, salsa-style tomatoes and sweet potatoes and brought piece-by-piece to your table until you’ve had your fill. Vinho Verde (green wine) or Sagres beer are the traditional beverages of choice here. 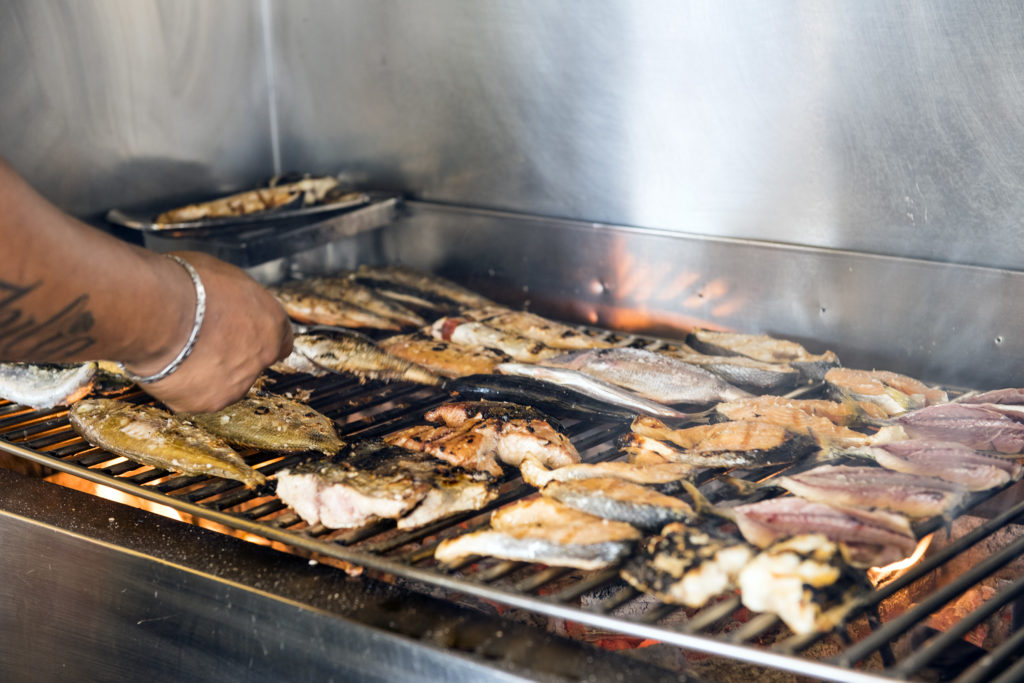 Fresh off the grill.

To access the beach in Olhão, we hire a speedboat to take us to the sand bar islands, as the ferries are running irregularly that day. The beaches have plenty of free loungers and striped umbrellas for hire with just a handful of local families and post-season stragglers, like us, wading through the crisp, cold water. Octopus salad with flat-leaf parsley, red onions, olives and a juicy squish of lemon is the lunch you want to order here. We never make it to the octopus capital, Santa Luzia near Tavira, less than 20 kilometres away, but the octopus or polvo we eat – grilled, smothered in tomato and onions and like this, in refreshing salads – is consistently good across the Algarve. That we get to see them freshly caught, for sale at the covered fish market in town, along with the farmers’ produce market that rolls in to great anticipation each Saturday, adds to the charm. Célia makes me promise that I won’t miss the market and I bring her back almonds for baking her famous cakes, from an ancient-looking vendor. “I love the Algarve for a lot of reasons, the wonderful beach where I have so many happy childhood holiday memories but also for the amazing fruit and vegetables,” Celia tells us. “There’s something special about the tomatoes and the oranges from the Algarve. And those waters carry our best fish and shellfish.”

While traditional fishing industry has lost some ground, the Algarve is where most of Portugal’s seafood is caught. We watch fishermen in small boats, their faces as old as time, pulling their catch ashore. Weather-beaten hands, roughened by the sun and sea spray, scrape the scales off the fish which will be put up for sale at the market in mere minutes. 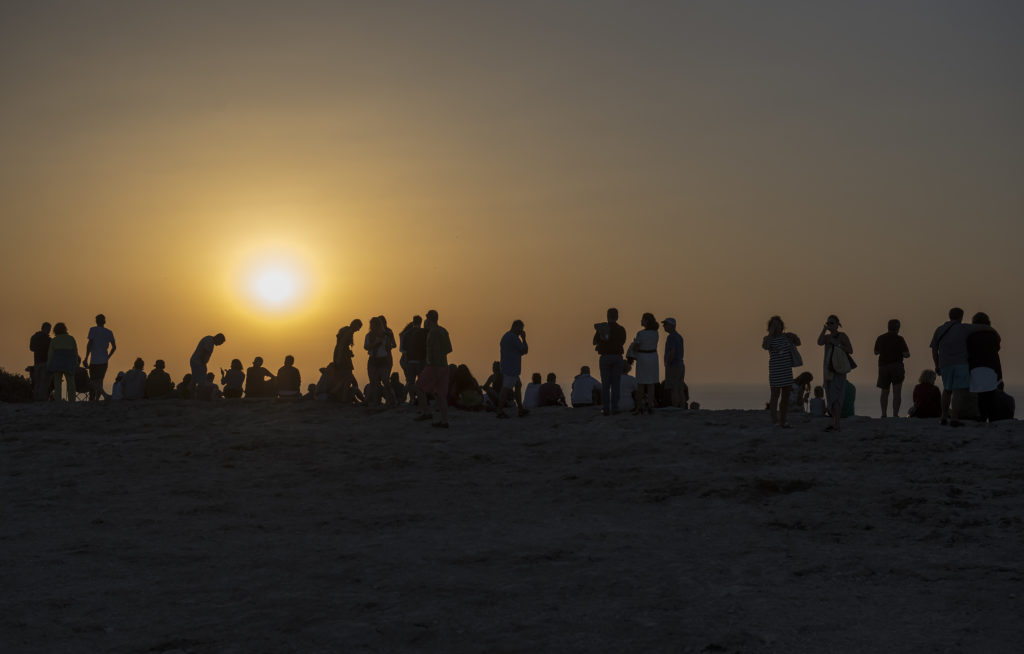 Wherever possible, from west-to-east we order the cataplana, a dish named for the vessel its prepared in, a pockmarked copper or stainless steel clam-shaped dish in which fish and seafood (or pork and clams in these parts) are steamed together with garlic, sliced onions and tomatoes. The most memorable one is served to us one evening in Aljezur, a fertile valley on the western front about 30 kilometres from Lagos. Punted as enough for two, that cataplana could have fed six with seconds to spare; it’s crammed with thick white fish, clams, prawns and huge langoustines. After we leave Aljezur, which is known for its sweet potatoes or batata doce, I notice these heavy purple-skinned tubers for sale – roasted and ready-to-eat – at markets across the Algarve. Chunks of soft sweet potatoes are excellent with roasted octopus too, I learn. A few weeks later, Célia prepares a large cataplana for a group of friends at her home near the beach, just outside Lisbon. We mop the sauce with crusty bread and raise our glasses of Vinho Verde to the bounty of the seas. 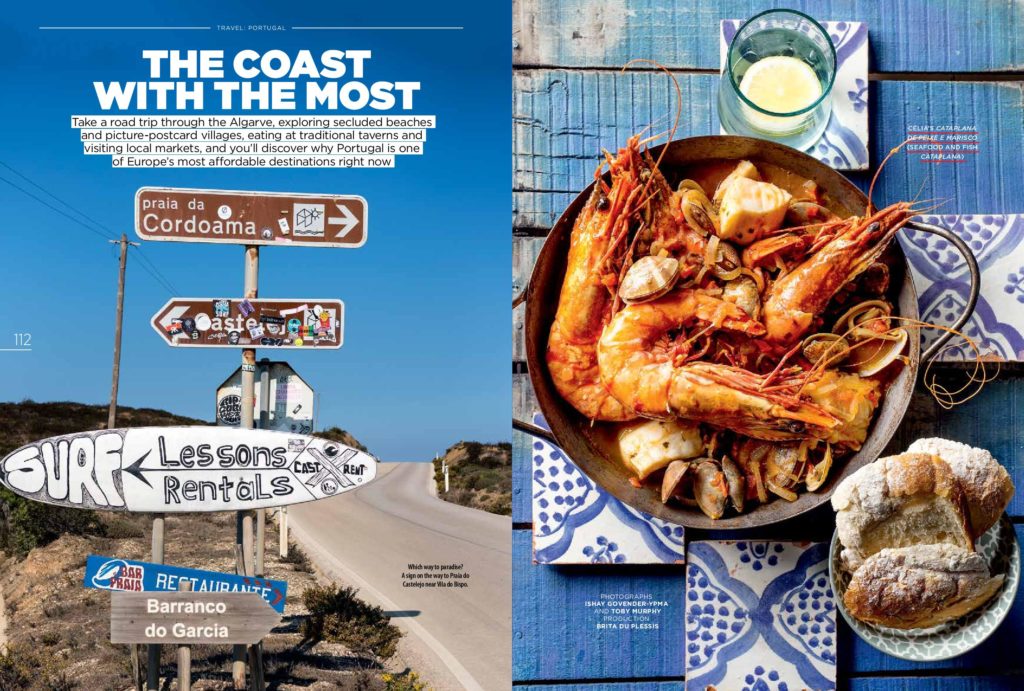 The coast with the most.

Portugal, formerly Lusitania, remains one of the highest per capita consumer of fish and the history of preserving (hello, salted cod or bacalhau) goes back to the time of the golden age of The Discoveries when it provided a vital food source for weary sailors. The country’s most lauded chef, José Avillez, counts Bacalhau à Brás, a dish of shredded bacalhau with matchstick-size fries, creamy scrambled eggs and olives as his all-time favourite Portuguese comfort meal. Over the decade that I’ve been visiting Portugal, locals have been adamant in their recommendations that no-one should leave Portugal without eating bacalhau, and taking home a canned souvenier – sardines, tuna, mackerl, squid and octopus in oilve oil, brine, piri piri or a vinegar marinade. The tins’ wrappers are usually adorned with vintage art, perhaps a reference to the nation’s fishing heyday. The Portuguese remain rightly proud of this tradition of canning, which is said to have started in 1853 in the Algarve town of Vila Real de Santo António. At many tascas around Portugal, you can order a beer at the counter with a snack of tinned fish, served with nothing more than a toothpick and a paper serviette. 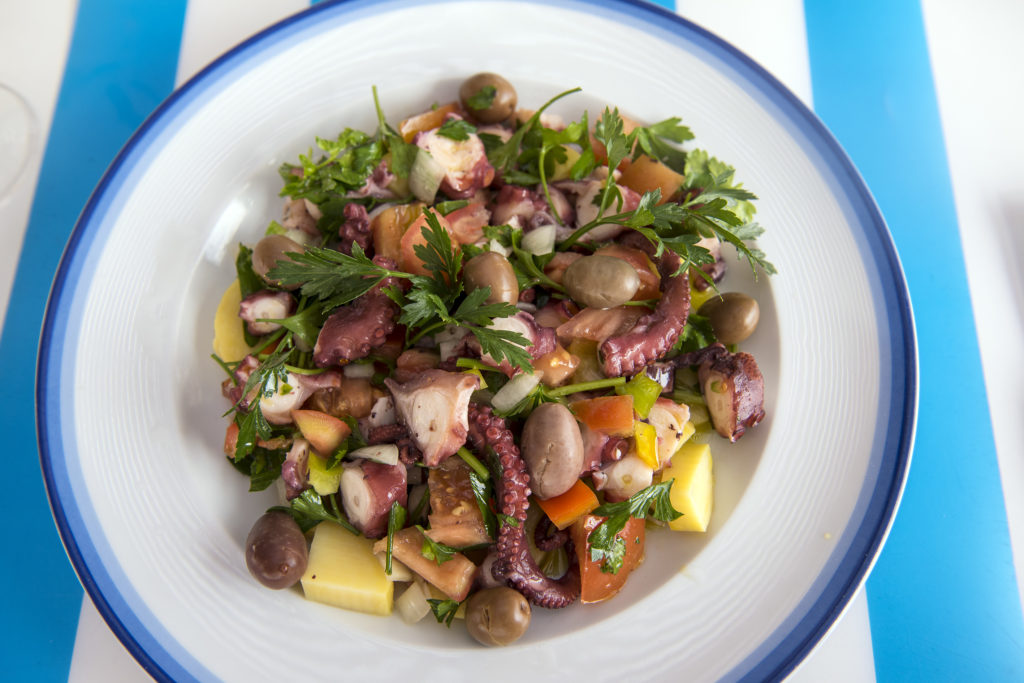 Bacalhau – From the sea straight to the plate.

And while flashy resorts and luxury spas can cater to your every need, it’s this sort of simplicity – fresh, grilled fish with a little drizzle of sun-ripened lemon, a languid stroll on cobbled streets at dusk, the sun dipping golden behind the ocean in Cabo St Vincente – the soutwestern-most point of Potugal, near surf capital Sagres – that holds the Algarve’s greatest allure. 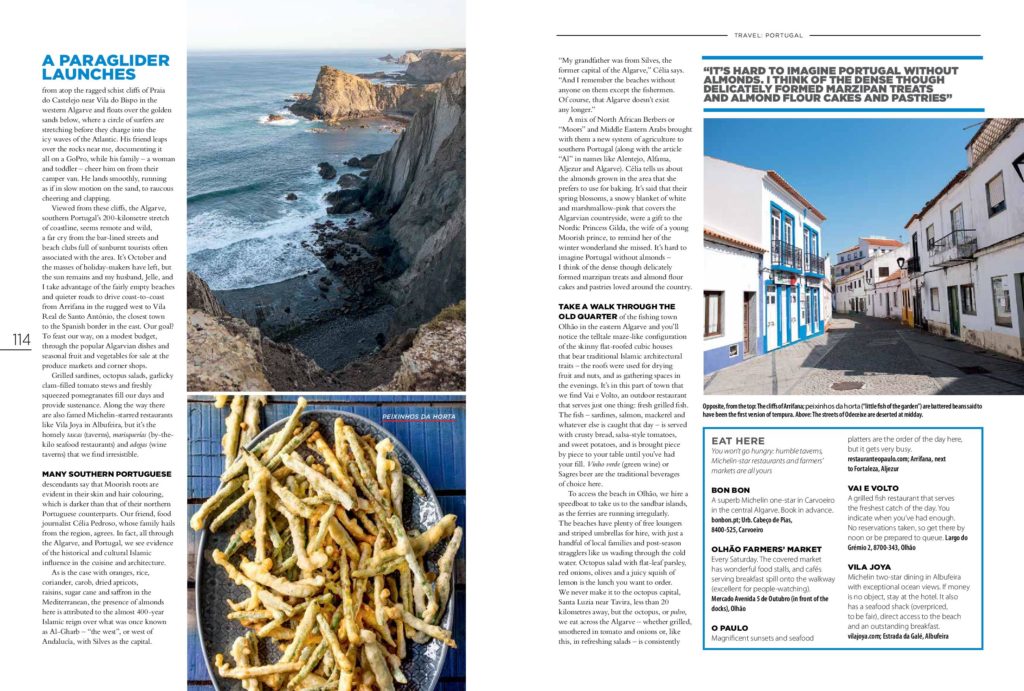 There’s so much Portugal has to offer.

Every Saturday. The covered market has wonderful food stalls and cafés (excellent for people-watching) spill out onto the walkway, serving good breakfasts.

Mercado Avenida 5 de Outubro, in front of the docks, Olhão

The magnificent sunsets and seafood platters but gets very busy.

www.restauranteopaulo.com; Arrifana, next to Fortaleza, Aljezur.

Superb 1-star Michelin in Carvoeiro in the central Algarve, Book in advance.

Two-star Michelin dining in Albufeira with exceptional views of the ocean. If money is no object, stay at the hotel. It also has a seafood shack (overpriced to be fair), direct access to the beach and an outstanding breakfast. 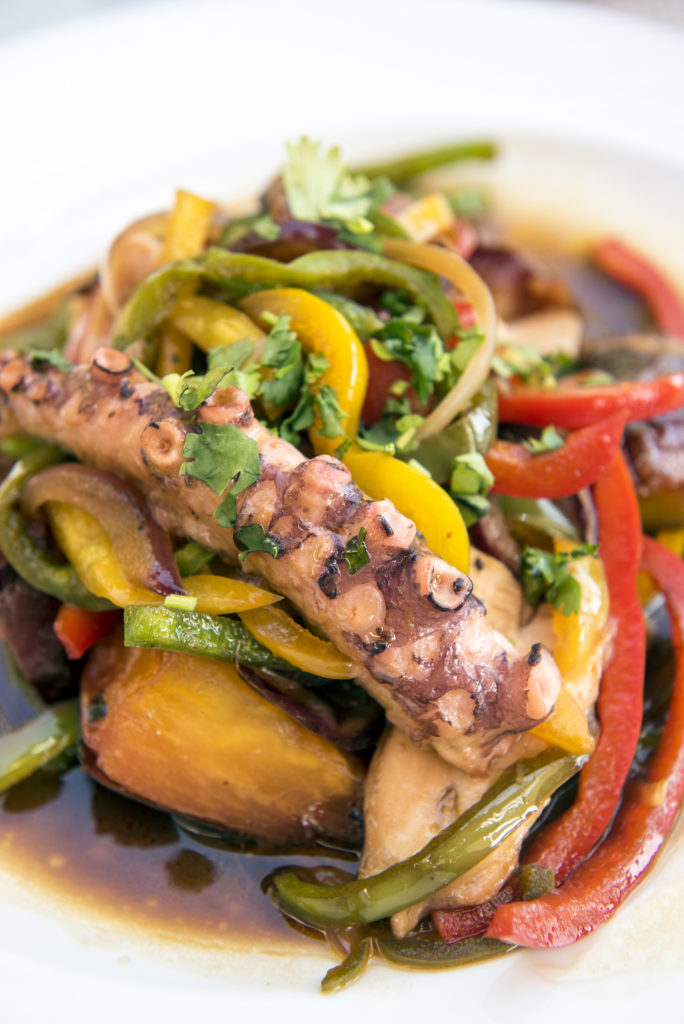 visa applications and the Portuguese embassy for more info: http://www.portugal.co.za/ 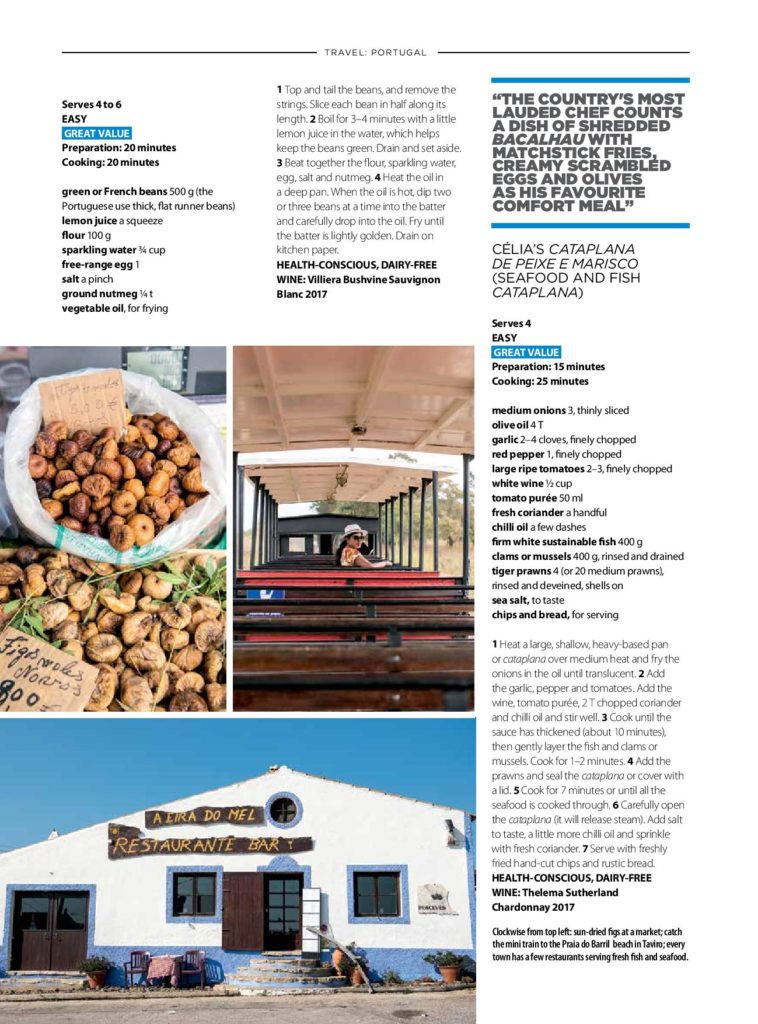