Quintonil and The Test Kitchen Collaborate in Cape Town 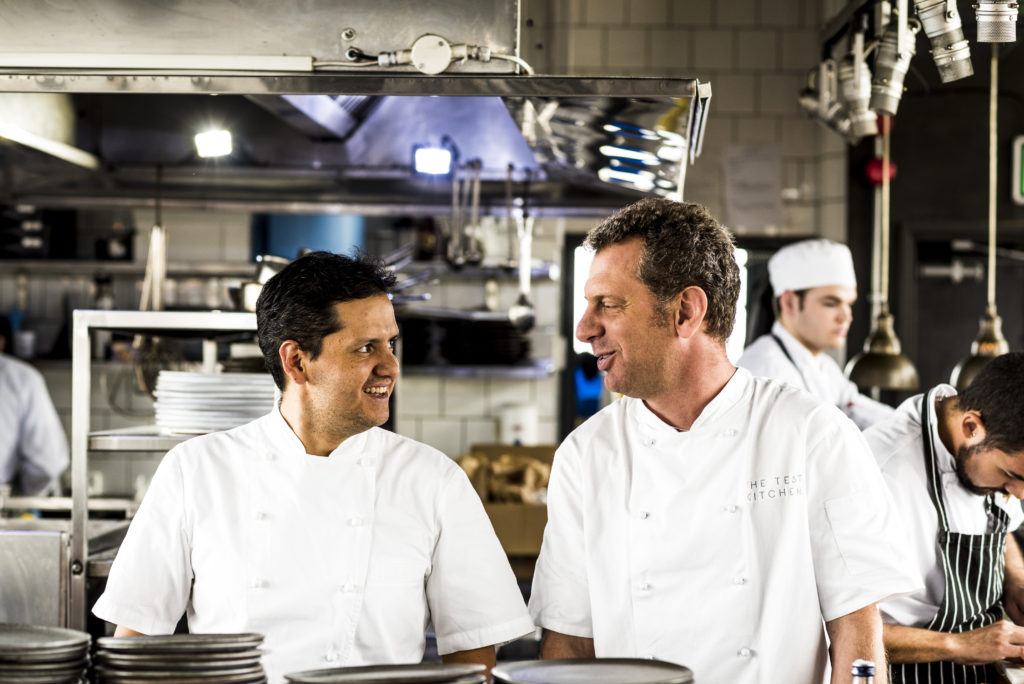 The Test Kitchen and Quintonil, both highly ranked on the World’s 50 Best restaurant list, recently hosted a collaboration dinner series. Ishay Govender-Ypma chatted to the chefs. Quintonil and Test Kitchen Collaborate for Mail and Guardian. (@IshayGovender)

“Are those the escamoles?” I ask the waitress, in a whisper. They are crisp, similar to Rice Krispies and unlike the soft, pliant ant larvae I’ve eaten before. “Yes,” she whispers back, “Chef told us not to make a big deal of it, you know, in case someone freaks out.” “But the ant larvae are the point,” I wink at her.  I’ve eaten a version of this dish at Quintonil, in Mexico City, but saying it out loud makes me sound like a shameless braggart. Locals who book a meal for the collaboration dinner held in Cape Town at the stylish 6-floor The Pot Luck Club, are surely seeking the Mexican specialities, I think. The hosts preparing the dinner are African and Mexican heavyweights, Luke Dale-Roberts’ The Test Kitchen (no. 22 on the World’s 50 Best list, 2016), and Jorge Vallejo’s Quintonil (no. 12 on the list and no. 6 on Latin America’s 50 Best, 2015). Quintonil’s grasshopper is ground up and indistinguishable in a chimichurri sauce served on local aged beef. I notch it up to transportation issues.

How do you whisk these ingredients through customs, I wonder. Luke Dale-Roberts who has been in talks for months with the Mexican embassy, which initially willed this collaboration, speculates about a diplomatic pouch. But he’s wrong this time; the ingredients arrive in the chef’s suitcase. Quintonil’s wily Vallejo, just 34, but with a host of similar global dinners under his belt, tells me the day after the first dinner (there are three: 15, 16 and 17 September 2016) that he’s had to get crafty.

“At the restaurant, we use fresh ingredients as most are in season but I have a friend who can freeze-dry food,” he says. And thus the escamoles arrived freeze-dried. And the chillies? In pastes and sauces. “I thought maybe the people would be scared [of the escamoles]. I know they are not amateurs. But I said: ‘Eat first, then I tell you,” he says. In spite of very little sleep since his arrival two days before and the boisterous Mexican Independence Day celebrations, which commenced a little after midnight on the first night of service, he’s in good spirits. 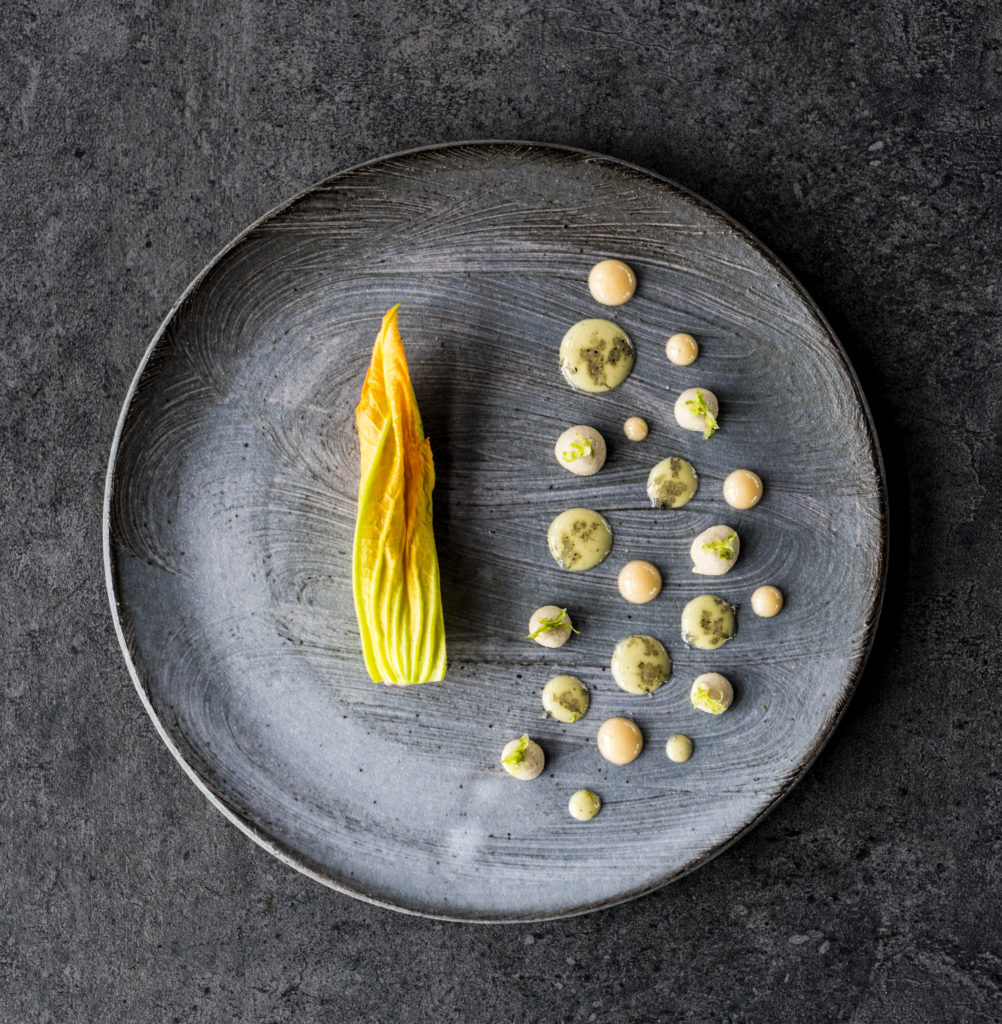 So is Dale-Roberts, whose signature restaurant The Test Kitchen is under renovation at the time, with a nerve-wracking few weeks left before the big reveal of his light and sound installation [re-opening 10 October 2016]. Encouraged by the response from the first night (“It has been a great experience.”) Dale-Roberts, who met with Vallejo in June 2016 in New York, at the World’s 50 Best restaurant awards, explains that the dinner series was effortless to coordinate. Over three months and a number of email exchanges, he sent Vallejo lists of South seasonal African ingredients and they developed a menu – first ten courses, which shaped into fourteen. A mix of autumnal flavours feature from Dale-Roberts who smokes sea bass and sweetbreads on separate dishes, uses celeriac, pine nut béchamel and pear, feather-light springbok Carpaccio on crunchy beetroot crisps and Peking-style quail breast with light Tunisian brik pastry. These blend seamlessly with Quintonil’s take on spring – with newly in-season zucchini flowers cocooning shrimp tartare, mushrooms with bright broad bean puree and crab tostadas (he brought the taco crisps from Mexico) with spicy mayonnaise – Dale-Roberts’ favourite dish on Vallejo’s menu. Vallejo uses both grass and grain-fed South African beef – an aged beef with grasshopper chimichurri, and wagyu with fermented cactus sauce.

Vallejo tells me that he always travels with Mexican chillies, in some form. In fact, he’d bring them before his set of knives. “I try to educate people about chillies, not all are hot. Some have a citrus note, some are sweet.”

With a rich and varied food culture, it’s often tough to compete with the street vendors and Mexican abuelas’ (grandmothers’) home cooking. “But I am cooking in my home, I am living on the second story of my restaurant, “ Vallejo responds, not missing a beat. “I think a big challenge for a [Mexican] chef is you have to be better than your grandmother and even your customers’ grandmothers. When my grandmother showed me how to cook, she was saying you have to put your soul and all your love into the food because you want a person to be nourished.”

Vallejo insists that his food is without pretention and that he easily will sacrifice presentation for flavour or what he calls: “deliciousness” “The eyes make you lazy. Food is also texture, the chewing sound, the first taste, the temperature. I like to be simple in plating but big in flavour,” he explains. His other tenets involve healthy food (Dale-Roberts mentions he’s moved away from meat-based stocks to simple, lighter and less fatty vegetable-based stocks and sauces), and the ethics of food and people management. “He is a very nice guy,“ Vallejo says of Dale-Roberts. “And we both take care of the staff in our kitchen. It is more than just making food, it is about collaborating,” he says of the easy rapport between the two.

To enhance the collaboration between the countries, the Mexican government intends to foster a culinary exchange after this inaugural partnership, says Mauricio Escanero, the Mexican Ambassador to South Africa. There’s a possibility of supplying maize, a staple consumed widely by both countries, to aid with drought currently experienced in Southern Africa. Quintonil staff conducted street food demonstrations in Cape Town’s impoverished Lavender Hill, to teach older women how to make simple maize-based foods for profit. The Test Kitchen will host workshops with a respected indigenous Oaxacan cook Abigail Mendoza and is set to co-host dinners in Mexico with a range of top restaurants in December. Viva la deliciousness!