Riga, the cultural capital of the Baltics is offering up lighter, more refined versions of Latvian staples. Written by Ishay Govender-Ypma (@IshayGovender) for Fine Dining Lovers. 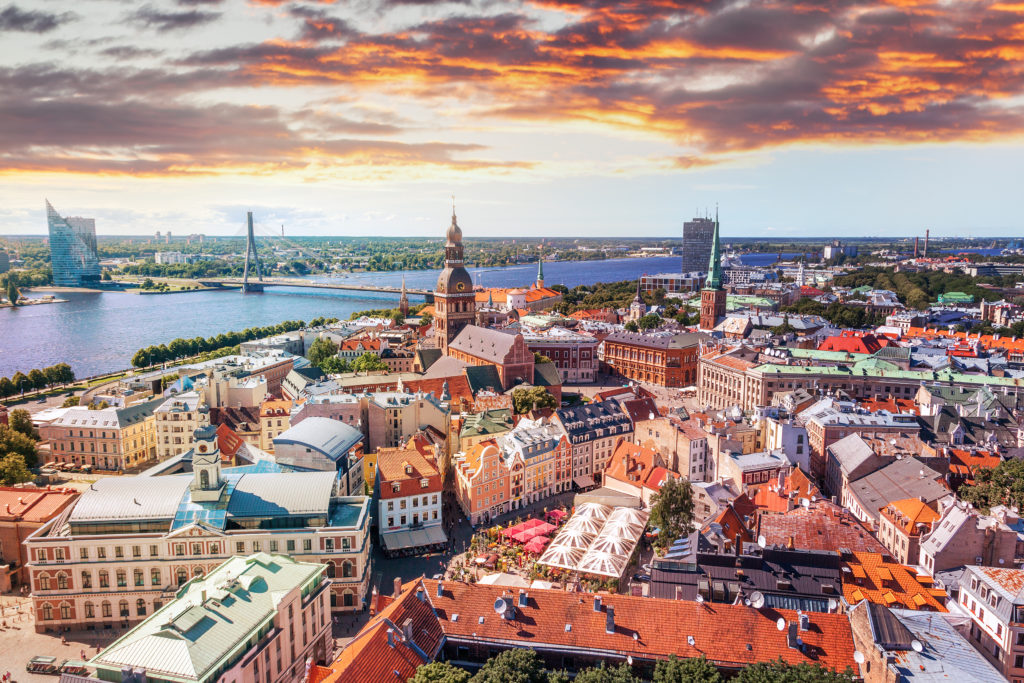 Often referred to as the pearl of Latvia in Central Eastern Europe, capital city Riga lies at the mouth of the Daugava River and along the glittering Gulf of Riga. It’s home to almost 700 000 residents and widely considered the cultural capital of the Baltics. The striking Gothic churches, Art Nouveau buildings and the medieval structures in the Old Town, lend the city a special charm. If it’s opera or a day at one of the nearby beaches you’re after, Riga seems to offer it all. And while Latvian food, like most from the region, is known to be on the hearty and sometimes greasy side, there are plenty of young chefs reviving the cuisine with a lighter touch. 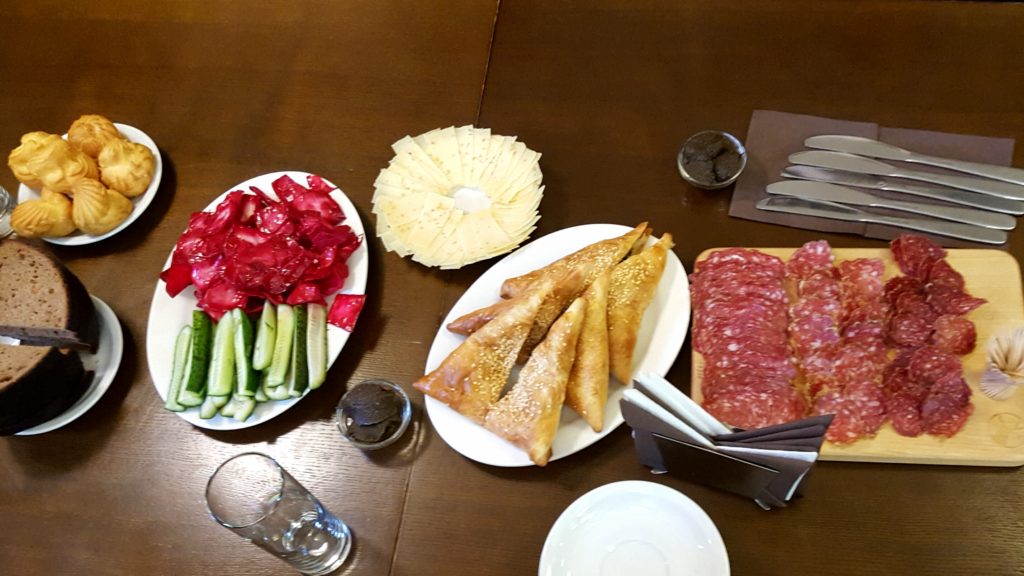 Latvian staples include pork that’s grilled, stewed and fried (many vegetables are prepared in bacon fat too). Cabbage is usually boiled or fermented like sauerkraut (that would be due to seven centuries of German rule), but is darker and much sweeter in flavour. Potatoes are served boiled, mashed and in stews. Dark loaves of bread made from wheat and rye and slathered in butter are central to many meals and legumes like grey peas (also known as brown peas) and beans are standard fare. Latvians are fond of dairy products – think kefir, sour cream, butter and the daily glass of milk. Robust soups featuring lentils, sausage and potatoes point to Latvia’s humble roots and are still enjoyed year round, often with chunks of fall-off-the-bone meat. Pig head, ears and feet can be found on the menus of more traditional restaurants. Game like deer, elk and wild boar and duck, geese and horsemeat have been eaten since ancient times. While the country enjoys a bountiful coastline, the fresh water fish like pike, vimba, sturgeon and trout are prized. 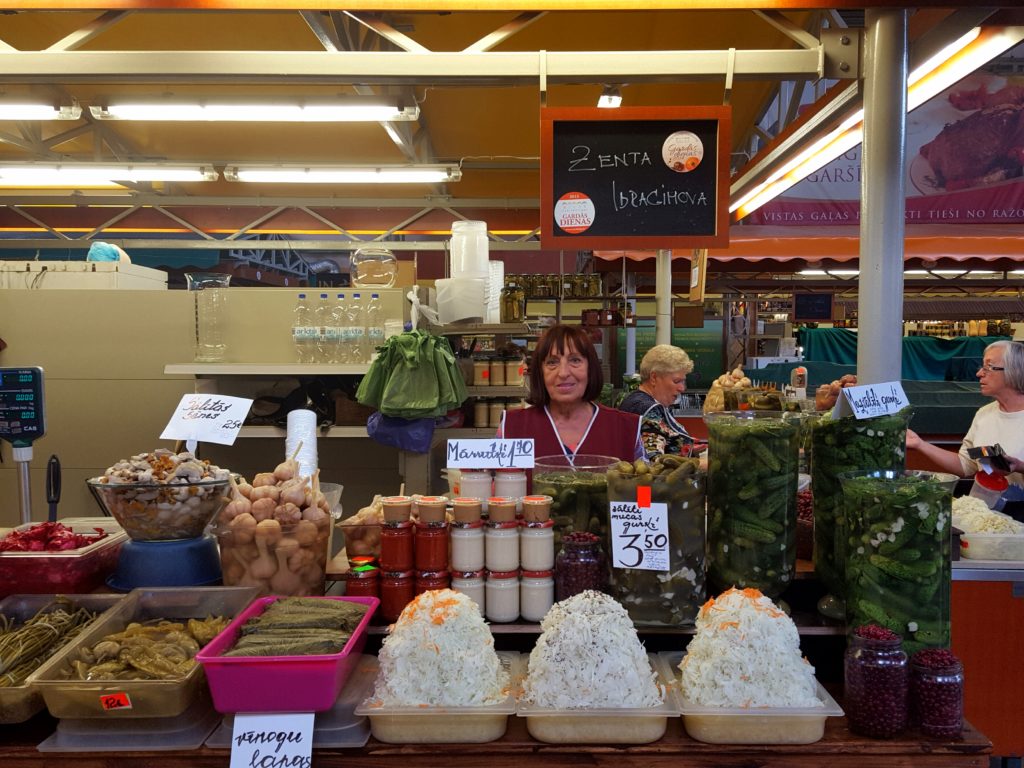 Riga’s Central Market is Europe’s largest market and bazaar and the outdoor and covered indoor areas and packed over weekends. I join Artūrs Adāmson of Eat Riga Tours on an exploration of a few older neighbourhoods, and one of the most entertaining stops turns out to be at this market. We watch as locals prod and select produce and vendors ply their wares – some enthusiastic and engaging, others weary and guarded. A nation of foragers, like their Polish neighbours, outdoor vendors carry tables of a variety of mushrooms. In the summer, berries like loganberries, blueberries and strawberries and bilberries are picked for jams and eating fresh. Artūrs mentions that Latvians are moving away from the larger portions and eating less meat and starch and experimenting with other cuisines a lot more.

The smoked hams and chicken products are particularly good at the market, as are the smoked cow’s milk cheeses which have a sweet profile. Apart from the caraway-studded cheese popular at certain times of the year, the majority of Latvian cheeses are bland. I try a rich sklandrausis, a traditional sweet carrot and potato pie with a rye crust. It’s heavy and not always well received by foreigners, I’m told. I find it confusing on the palate and tuck it into a serviette for later. The triangular Uzbekistani samsas (samosas), I find, are reassuringly familiar and we order a few more. The pickle section is enormous (locals are loyal to their vendors, I’m told) and I come to believe that if it grows in the earth, Latvians will find a way to brine and bottle it.. The craft beer section features a stand serving fresh ales decanted into bottles patrons recycle from home. 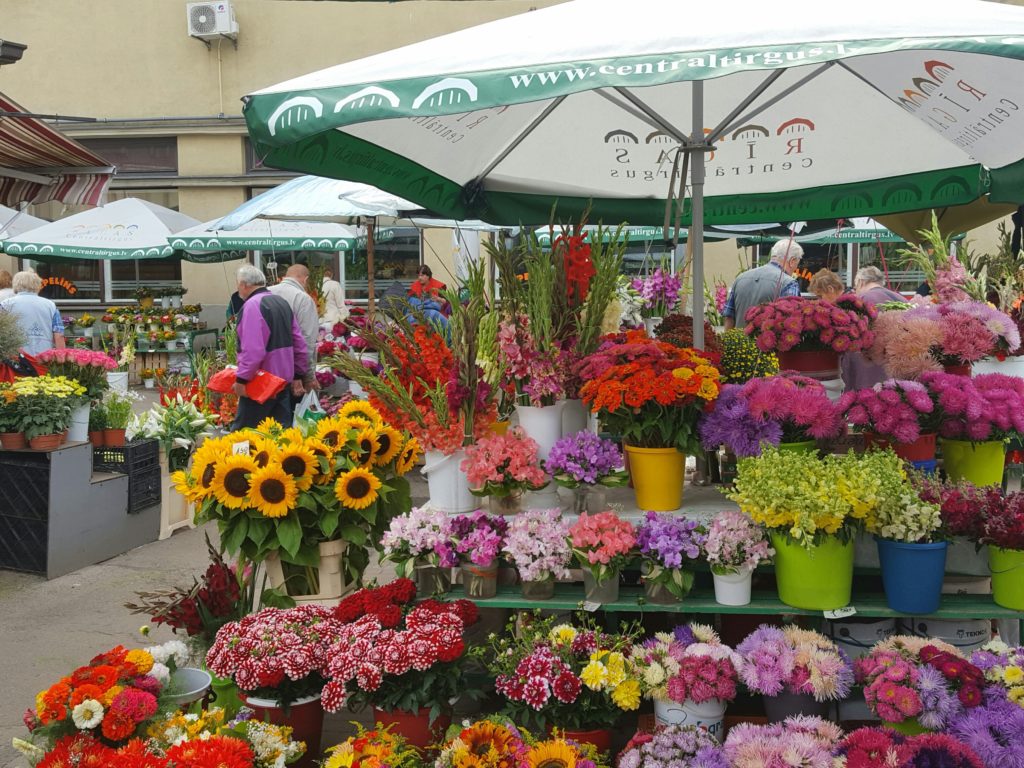 flowers at a market in Riga

Gorgeous plates of food (think bright pink pickled vegetables against charcoal crockery) in a spacious restaurant that flanks the Freedom Square monument and the gardens of the National Opera.

Along a romantic cobbled street, the restaurant that translates quiet literally to “three chefs”, and is run by three chefs is much acclaimed. In an intimate setting, the first course is crafted on a piece of butcher’s paper on your table –  swirls of pestos and sauces like an edible Jackson Pollock creation, that you dip bread into. It’s quite the welcome.

One of Riga’s oldest and grandest fine dining restaurants, priding itself in its relationship with small farmers and growers.

A vibey wine bar with minimalist monochromatic décor serving tapas and an impressive selection of wine. It gets packed with a hip crowd; book a table if you can.

A little paradise for vegans (who may struggle with all the pork and dairy across Latvia) and lovers of the clean and healthy lifestyle. They do great juices and raw chocolate desserts too. There are three outlets in the city.