I gave up Law to Travel the World

Strange things happen when you give up Law to travel and write a blog (www.foodandthefabulous.com), I discovered five years ago. Even stranger, when the blog wins a national award. A world not accessible to civilians, which is what you were before, cracks a fraction and into Narnia you step. Instead of fantastical creatures, there are celebrities, instead of snow there’s a thing called networking, and instead of witches, there are ostensible “freebies” of wine and meals and vouchers, that aren’t free at all, of course. And there are television and magazine shoots, in your own kitchen. Dreamy, eh? If you’re unaccustomed to all of this and used to questioning everything (I was that “but, why?” child; my unlucky parents), it’s bizarre. It’s understandably transient. It’s fun, too. But about the blog, another time.

Just a few years before this I was a practising attorney with a post-grad in commercial law but a heart and snout for human rights and social justice issues, in the corridors of ‘corporate’ skirting on the wrong side of burnt-out. And refusing to admit it. I dreamt of three things with fervent longing: to sleep a full night, to have the time to read an entire novel in a month, or two, and to see beyond the traffic-facing windows of my office. After working through the guilt of not being productive for every waking moment, I gambled on all three and paused long enough to fall in love with a decent man, somewhere in Sea Point, itself caught between stagnation and development at the time.

Unsentimental being that he is, the man convinced me to set-up nest in an old suburb outside the hum and buzz of my coffee-culture scene. To exact revenge, I now drag him and his office on assignments abroad, the catch being he has to pay his own way. It’s a tough life. This is supposedly the part in the abbreviated Grimm’s fairy tale where everyone lives happily ever after. Only my own career journey which was starting to settle, took a turn, and to this day, inchoate, it’s snaking into thickets unknown. Ever afters? 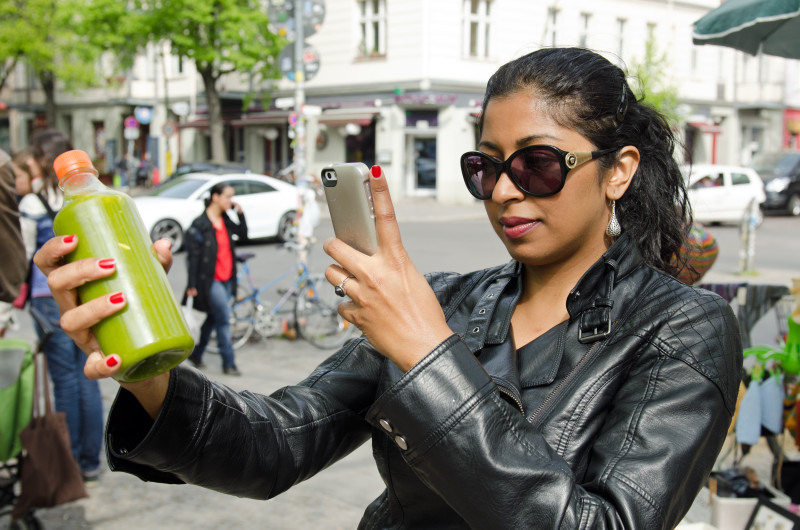 Having a moment with a green juice in Berlin

I have been writing for some medium, in the non-fiction and creative sphere, my entire life. But it was only after the blog that I allowed myself permission to write for formal publications. It’s the curse of under-selling, but in all honesty, the self knows when it’s ready.

From recipe blogs with travel anecdotes, the writing moved into service pieces, food and food anthropology, and travel stories for local and international publications. Increasingly now, the focus is on culture and social justice stories. Travel editors will often say that stories are about the place primarily. But, without the people, the places are characterless vacuums, devoid of the edge of love and loss, colour and chaos. I always try to structure travel around meeting and mingling with locals in as unobtrusive way as possible.

I am concerned about the ethical responsibility we have as journalists and writers, travel and otherwise, in relaying the African story. Environmental writers have ensured we know full well about the repercussions of our years of recklessness. Can travel writers say the same about the villages, peoples, cultures, religions, food and history of this land? There are several variables to consider here – like who should be telling the stories and how, and even how we photograph locals. It’s true we who live here, all have a stake to the concept of African-ness, but it is less true that the stake is equal. Pause a little, before you digest that in too literal a sense.

For far too long Africa’s narrative has been skewed by colonisation. The South African tourism industry, and media, for whom transformation has been woefully slow, must work with us, the writers in how we frame these stories. Will we perpetually propagate, our pattern de rigueur, the imagery and tales of dusty poor black children with shiny-faced white tourists beaming centrally, as I see in countless social media posts? (The traditional and social media platforms now converging seamlessly.)

Are we willing to broaden the scope to allow local black people to tell the African stories in this industry too? Is the space safe enough yet for us to have this conversation, and why the need to clarify this? Who will be willing to give up a freebie or media trip to mentor and allow other voices in?

This is somewhat new territory as far as I can tell, and our road ahead, if we do get aboard, will be lengthy and uncomfortable. Or, are we out of time, in how we’ve allowed attitudes to become entrenched, and a status quo to solidify? If law and travel blogging have taught me one thing on the road to journalism, it’s that patience is essential, but leveraging the voice, when the situation demands, even more so.