Supper Clubs from around the World

Come Dine With Us: Supper Clubs

Supper clubs, once exclusively underground, clandestine, anti-establishment and the toughest reservation to get in town, are going mainstream in a city near you. For Marie Claire, May 2014. 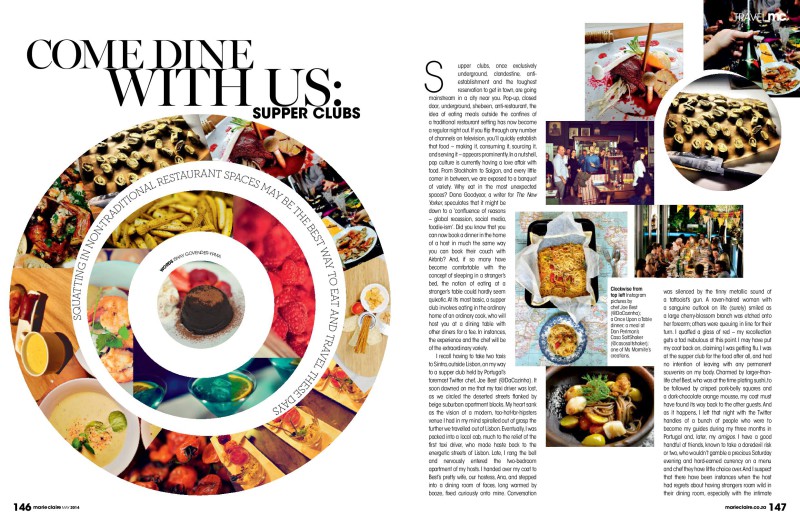 Pop-up, closed door, underground, shebeen, anti-restaurant, the idea of eating meals outside the confines of a traditional restaurant setting has now become a regular night out. If you flip through any number of channels on television, you’ll quickly establish that food – making it, consuming it, sourcing it, and serving it – appears prominently. In a nutshell, pop culture is currently having a love affair with food. From Stockholm to Saigon, and every little corner in between, we are exposed to a banquet of variety. Why eat in the most unexpected spaces? Dana Goodyear, a writer for The New Yorker, speculates that it might be down to a ‘confluence of reasons – global recession, social media,foodie-ism’.

Did you know that you can now book a dinner in the home of a host in much the same way you can book their couch with Airbnb? And, if so many have become comfortable with the concept of sleeping in a stranger’s bed, the notion of eating at a stranger’s table could hardly seem quixotic. At its most basic, a supper club involves eating in the ordinary home of an ordinary cook, who will host you at a dining table with other diners for a fee. In instances, the experience and the chef will be of the extraordinary variety. 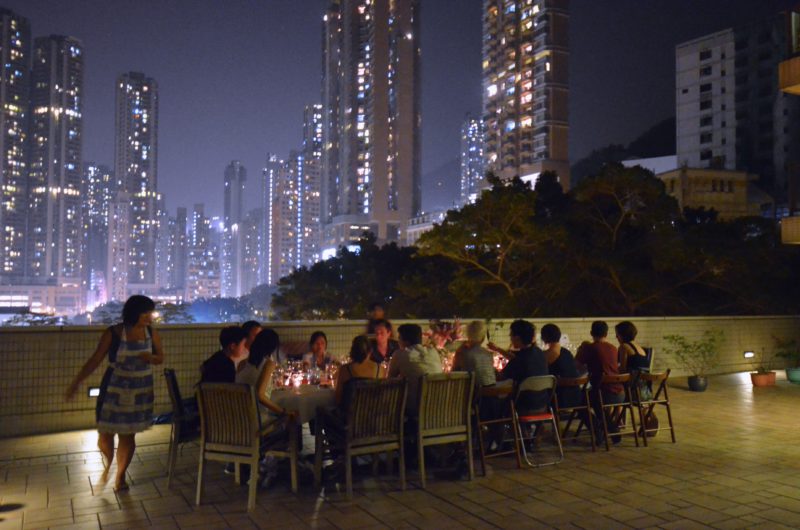 Image supplied. Under the Stars by Stefan Irvine, Under the Table

I recall having to take two taxis to Sintra, outside Lisbon, on my way to a supper club held by Portugal’s foremost Twitter chef, Joe Best (@DaCozinha). It soon dawned on me that my taxi driver was lost, as we circled the deserted streets flanked by beige suburban apartment blocks. My heart sank as the vision of a modern, too-hot-for-hipsters venue I had in my mind spiralled out of grasp the further we travelled out of Lisbon.

Eventually, I was packed into a local cab, much to the relief of the first taxi driver, who made haste back to the energetic streets of Lisbon. Late, I rang the bell and nervously entered the two-bedroom apartment of my hosts. I handed over my coat to Best’s pretty wife, our hostess, Ana, and stepped into a dining room of faces, long warmed by booze, fixed curiously onto mine. Conversation was silenced by the tinny metallic sound of a tattooist’s gun. A raven-haired woman with a sanguine outlook on life (surely) smiled as a large cherry-blossom branch was etched onto her forearm; others were queuing in line for their turn. I quaffed a glass of red – my recollection gets a tad nebulous at this point. I may have put my coat back on, claiming I was getting flu. I was at the supper club for the food after all, and had no intention of leaving with any permanent souvenirs on my body. Charmed by larger-than life chef Best, who was at the time plating sushi, to be followed by crisped pork-belly squares and a dark-chocolate orange mousse, my coat must have found its way back to the other guests. And as it happens, I left that night with the Twitter handles of a bunch of people who were to become my guides during my three months in Portugal and, later, my amigos. 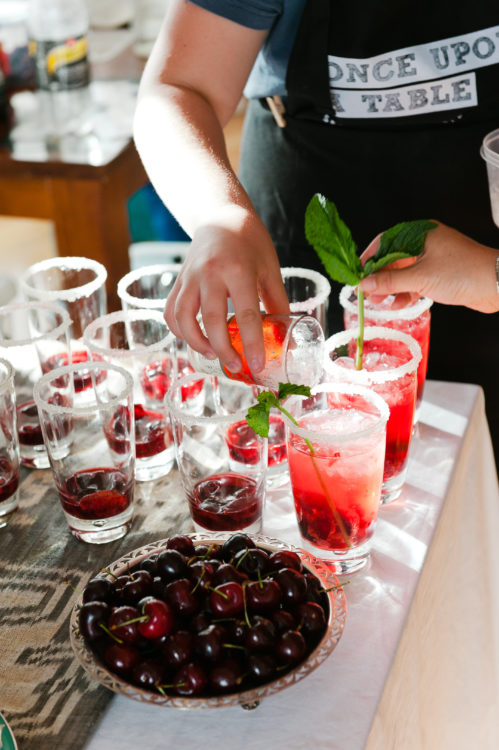 I have a good handful of friends, known to take a daredevil risk or two, who wouldn’t gamble a precious Saturday evening and hard-earned currency on a menu and chef they have little choice over. And I suspect that there have been instances when the host had regrets about having strangers roam wild in their dining room, especially with the intimate family portraits on the walls and heirloom rugs on the floor. And the wine stains waiting to happen. 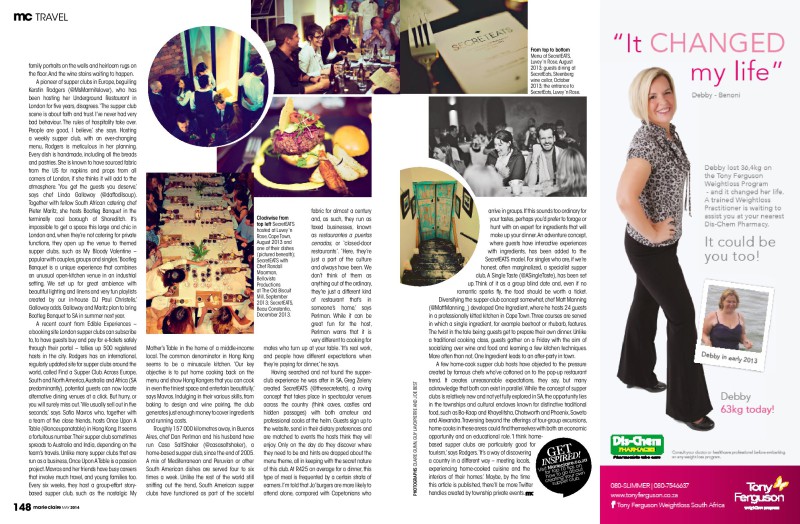 A pioneer of supper clubs in Europe, beguiling Kerstin Rodgers (@MsMarmitelover), who has been hosting her Underground Restaurant in London for five years, disagrees. ‘The supper club scene is about faith and trust. I’ve never had very bad behaviour. The rules of hospitality take over. People are good, I believe,’ she says. Hosting a weekly supper club, with an ever-changing menu, Rodgers is meticulous in her planning. Every dish is handmade, including all the breads and pastries. She is known to have sourced fabric from the US for napkins and props from all corners of London, if she thinks it will add to the atmosphere. ‘You get the guests you deserve,’ says chef Linda Galloway (@daffodilsoup).

Together with fellow South African catering chef Pieter Maritz, she hosts Bootleg Banquet in the terminally cool borough of Shoreditch. It’s impossible to get a space this large and chic in London and, when they’re not catering for private functions, they open up the venue to themed supper clubs, such as My Bloody Valentine – popular with couples, groups and singles. ‘Bootleg Banquet is a unique experience that combines an unusual open-kitchen venue in an industrial setting. We set up for great ambience with beautiful lighting and linens and very fun playlists created by our in-house DJ Paul Christelis,’ Galloway adds. Galloway and Maritz plan to bring Bootleg Banquet to SA in summer next year. 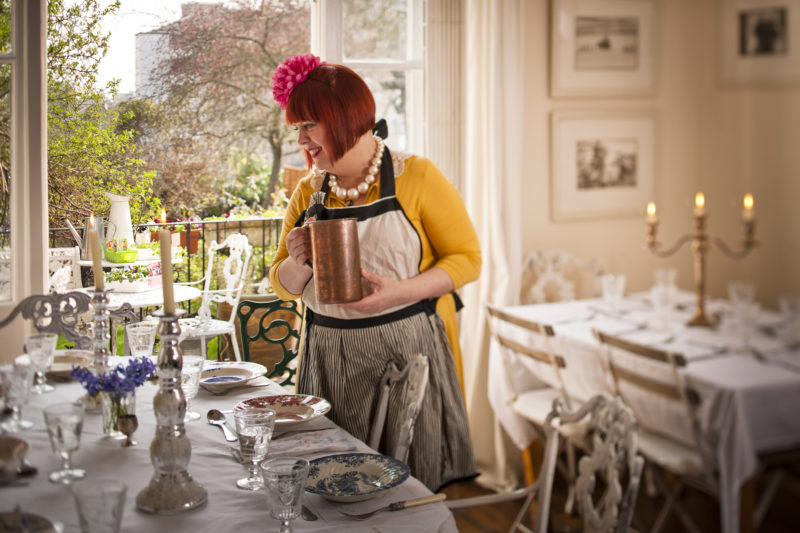 A recent count from Edible Experiences – a booking site London supper clubs can subscribe to, to have guests buy and pay for e-tickets safely through their portal – tallies up 500 registered hosts in the city. Rodgers has an international, regularly updated site for supper clubs around the world, called Find a Supper Club. Across Europe, South and North America, Australia and Africa (SA predominantly), potential guests can now locate alternative dining venues at a click. But hurry, or ou will surely miss out. ‘We usually sell out in five seconds,’ says Sofia Mavros who, together with a team of five close friends, hosts Once Upon A Table (@onceuponatable) in Hong Kong. It seems a fortuitous number. Their supper club sometimes spreads to Australia and India, depending on the team’s travels. Unlike many supper clubs that are run as a business, Once Upon A Table is a passion project. Mavros and her friends have busy careers that involve much travel, and young families too.

Every six weeks, they host a group-effort storybased supper club, such as the nostalgic My fabric for almost a century and, as such, they run as taxed businesses, known as restaurantes a puertas cerradas, or ‘closed-door restaurants’. ‘Here, they’re just a part of the culture and always have been. We don’t think of them as anything out of the ordinary, they’re just a different kind of restaurant that’s in someone’s home,’ says Perlman. While it can be great fun for the host, Perlman warns that it is very different to cooking for mates who turn up at your table. ‘It’s real work, and people have different expectations when they’re paying for dinner,’ he says. Having searched and not found the supperclub experience he was after in SA, Greg Zeleny created SecretEATS (@thesecreteats), a roving concept that takes place in spectacular venues across the country (think caves, castles and hidden passages) with both amateur and professional cooks at the helm. 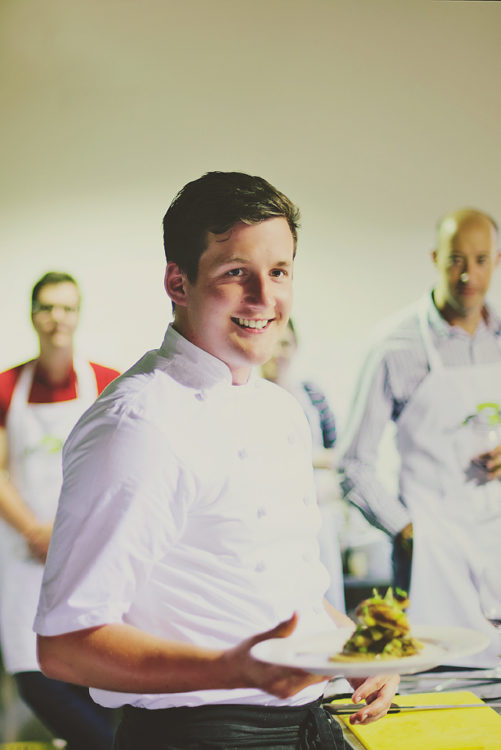 Guests sign up to the website, send in their dietary preferences and are matched to events the hosts think they will enjoy. Only on the day do they discover where they need to be and hints are dropped about the menu theme, all in keeping with the secret nature of this club. At R425 on average for a dinner, this type of meal is frequented by a certain strata of earners. I’m told that Jo’burgers are more likely toattend alone, compared with Capetonians who
arrive in groups. If this sounds too ordinary for your tastes, perhaps you’d prefer to forage or hunt with an expert for ingredients that will make up your dinner. An adventure concept,where guests have interactive experience with ingredients, has been added to the SecretEATS model. For singles who are, if we’re honest, often marginalized, a specialist supper club, A Single Taste (@ASingleTaste), has been set up. Think of it as a group blind date and, even if no romantic sparks fly, the food should be worth a ticket.

Diversifying the supper-club concept somewhat, chef Matt Manning (@MattManning_) developed One Ingredient, where he hosts 24 guests in a professionally kitted kitchen in Cape Town. Three courses are served in which a single ingredient, for example beetroot or rhubarb, features. The twist in the tale being: guests get to prepare their own dinner.

Unlike a traditional cooking class, guests gather on a Friday with the aim of socializing over wine and food and learning a few kitchen techniques. More often than not, One Ingredient leads to an after-party in town. A few home-cook supper club hosts have objected to the pressure created by famous chefs who’ve cottoned on to the pop up restaurant trend. It creates unreasonable expectations, they say, but many acknowledge that both can exist in parallel. While the concept of supper clubs is relatively new and not yet fully explored in SA, the opportunity lies in the townships and cultural enclaves known for distinctive traditional food, such as Bo-Kaap and Khayelitsha, Chatsworth and Phoenix, Soweto and Alexandra.

Traversing beyond the offerings of tour-group excursions, home cooks in these areas could find themselves with both an economic opportunity and an educational role. ‘I think homebased supper clubs are particularly good for tourism,’ says Rodgers. ‘It’s a way of discovering a country in a different way – meeting locals, experiencing home-cooked cuisine and the interiors of their homes.’ Maybe, by the time this article is published, there’ll be more Twitter handles created by township private events