Sugar, Spice and a Question of Identity – Réunion Island Food

Culinary and cultural exploration are deeply fused, Ishay Govender-Ypma (@IshayGovender) discovers on a visit to the volcanic French island, Réunion. For The National UAE, 4 Feb 2016. 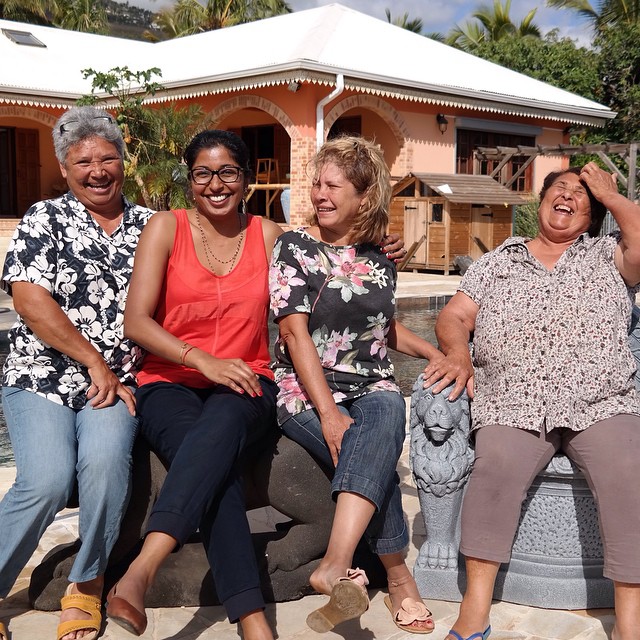 Author (2nd left) with a family of local farmers – they titled this: “The Malabar returns home” – Malabar a reference to Indians, here in Reunion and as you may know, make up a significant chunk of the Creole population

If not for the volcanic activity leaping through the floor of the Indian Ocean three million years ago, Île de la Réunion, neighbouring the Mascarenes known as Mauritius and Madagascar, would cease to exist. The inactive volcano, Piton-des-Neiges, the highest point on the island which is a department of France and popular with holidaymakers from the mainland, has sculpted the vast rugged interior of amphitheatres or “cirques”. The terrain here is challenging, with treacherous mountain paths, spiralling waterfalls, Alpine-like forests and remote hamlets like those at Mafate only accessibly by helicopter, or foot. The other volcano, the youthful Piton de la Fournaise, less than 400 000 years old, which has erupted almost annually since 1998 and glowers like the Eye of Sauron, is a spectacle on most tourists’ itineraries. It’s also a stark reminder that life on this tropical island with around 200 biomes and temperatures that average a moderate 24 degrees Celsius – chilly in the verdant mountains and often blustery along the black-sand coast, is at the whim of an uncontrollable natural force.

It is for this reason that many of the Réunionnaise I speak to, say they see themselves as inhabitants of a volcano floating in an ocean close to continental Africa, and secondly they consider themselves French. “We Réunionnaise – we eat, we drink, we discuss,” Nicolas Barniche, my guide, says of the locals’ favourite pastimes that fashion a buffer against living in these natural extremes. He promises a “discussion” over a cup of the country’s most precious export, but not at a regular café; instead we venture to the source.

Most Precious Coffee on Earth 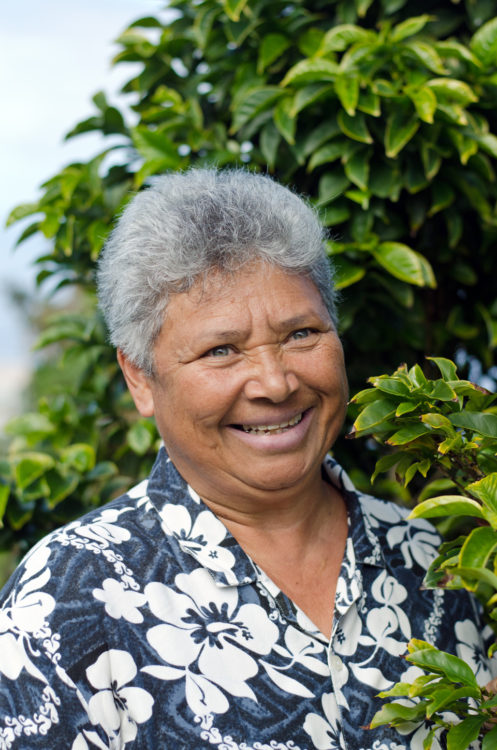 The volcanic-rich earth has been particularly good for one crop reintroduced (solely due to the interest of researcher Yoshiaki Kawashima of Ueshima Coffee Company in Japan) in 2003: coffee. This is Bourbon pointu, a sought-after varietal that costs more than 200 euros per kilogram. Sugar cane replaced coffee entirely from around 1880. Pointu is produced in small batches and sells out long before the cycle is complete.

Maximilia Vitry the managing director of the Bourbon Pointu Coffee Cooperative invites me to her small estate, Café Hier in La Chaloupe, wind-lashed on this day. Pointu evolved naturally from Arabica that was brought to the island, known then as Île Bourbon, from Yemen back in 1715. Under King Louis XV, Réunionnaise coffee was declared one of the best in the world by his court. By 1771 pointu’s mutation had stabilised, with smaller leaves and true to its namesake, petite pointed cherries; when ripe, a deep burgundy hue. We examine the fruit with Vitry and her mother, Marieta Payet who helps to hand-harvest the crop, part of a seven-member all-women team. Unlike with Kopi Luwak, the famed Asian palm civet coffee, labour to harvest in Réunion is costly and producers are paid “a fair price”, Vitry, a certified coffee “sommelier”, explains. “Anyway, the Kopi Luwak tastes like…” and she launches into a row of expletives that has us all chuckling.

We zip up our windbreakers while Vitry prepares the French press for the perfect brew. She announces that the piquenique, a local tradition of cooking and eating outdoors will move to her sister’s house ten minutes away, where it’s warmer.  On this island, merely 63 kilometres across its longest point and 43 kilometres in width, unless you hit the single carriage traffic, or the neck-whipping bends in Cilaos, most places are easy to drive to. 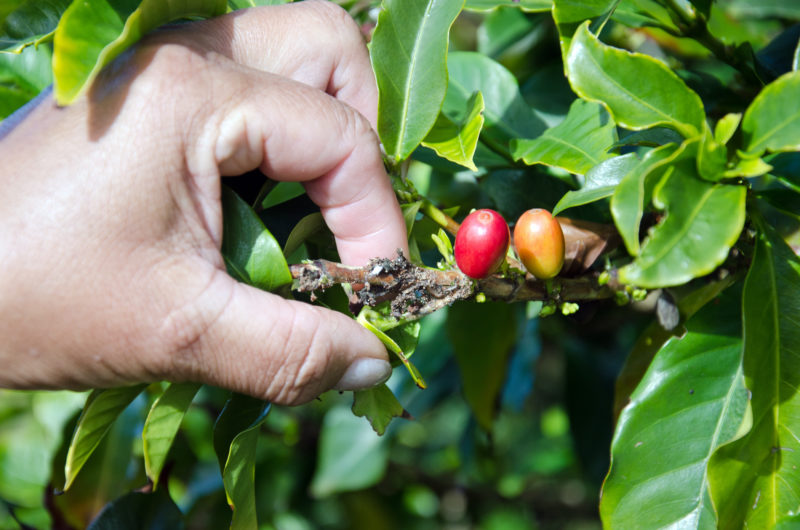 Vitry uses the ratio of seven grams of coffee to 100 milliliters of boiled water and measures the temperature with a kitchen thermometer – 94 degrees Celsius is ideal. “Oh, I fell into it like Obelix and the magic potion,” she laughs boisterously at her self-confessed “coffee obsession”.

First, we inhale the aroma – hints of citrus and floral notes; it tastes fruity, with no bitterness. At 0,4 – 0,8 percent caffeine, it has one of the lowest levels of all varietals. There is no need for sugar, or milk. The terroir, or characteristics of the soil will affect the taste of the crop each year, and so will the weather, Vitry tells us. The cyclones have previously destroyed entire crops.

But there are plenty of reasons to celebrate today. At our picnic by the pool at Vitry’s sister’s house we dine on slow-cooked lentil stew, Chinese chicken stir fry, rice and mango achard (pickle). Mrs Payet discovers that she knew Barniche’s grandparents, having stayed on one of their properties as a child where her parents worked. There are great hoots around the table and declarations about how connected the land is. Before we leave, I spot a large jar of vanilla pods on a shelf and Vitry tells me that most families will keep some in the kitchen, and even cultivate it in their gardens. 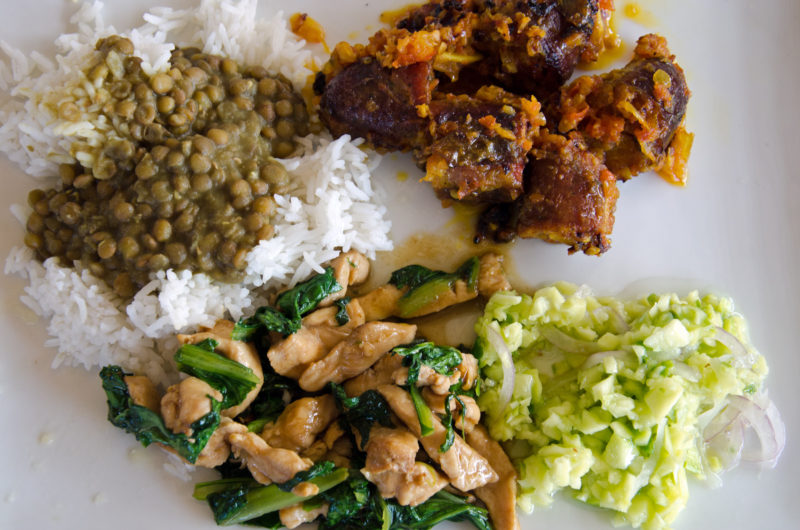 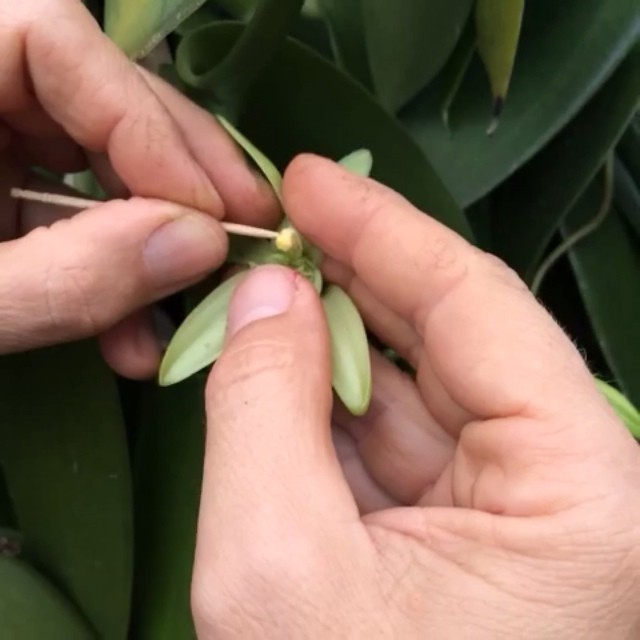 Hand pollination of vanilla in Reunion – every bud is pollinated this way and technique affects the size of the bean.

Réunion was known for its vanilla, well before coffee arrived, and like coffee cherries, vanilla pods take nine months to mature and the flowers hint of jasmine. At La Vanilleraie, a plantation in Sainte-Suzanne in the north-east, agricultural engineer, Bertrand Côme, takes us through the process from hand pollination (there are no bees here) to “killing” the beans in water at 65 degrees Celsius, transforming them from green to brown, drying, sorting and packing. The aroma of vanilla drying, plump and chocolatey is heady.

In 1819, the French brought the vanilla orchid to Réunion from its native Mexico, but for twenty years, Côme says, there were no flowers. When one appeared, it was a 12-year-old slave Edmond Albius who pollinated it by hand, having learnt basic botany and gardening from his master. “Slavery hadn’t ended and for a long time he [Albius] wasn’t credited with the discovery.”

At Côme’s plantation, workers handle the vanilla pods at eight different stages. “I don’t think technology can ever take over the job of the hand,” he says. “Even the length of the bean depends on the hand that pollinates it.”

In the plantation’s store, vanilla-infused creams and stacks of pods are arranged invitingly. Large chests contain pods in tubes with spiky crystals called vanillin. These, Côme says, are the “diamonds of vanilla” created through oxidation in the glass. Vanilla ice costs a cool 1000 Euro a kilogram. I leave with a stack of pods, and pages of Côme’s recipes and meticulous storage tips. 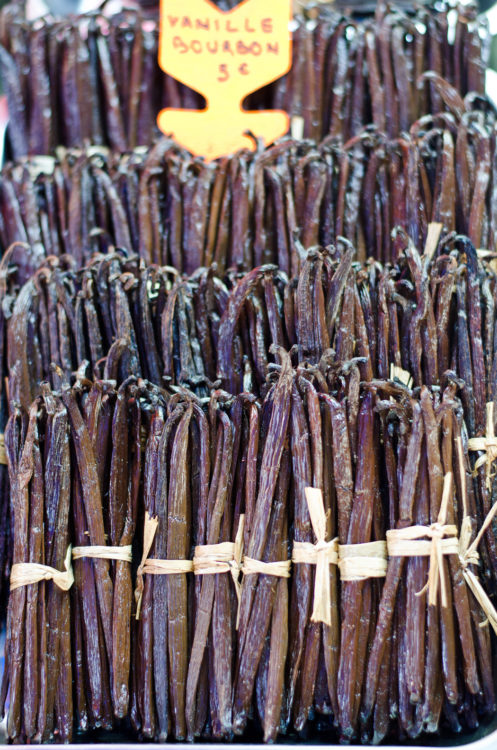 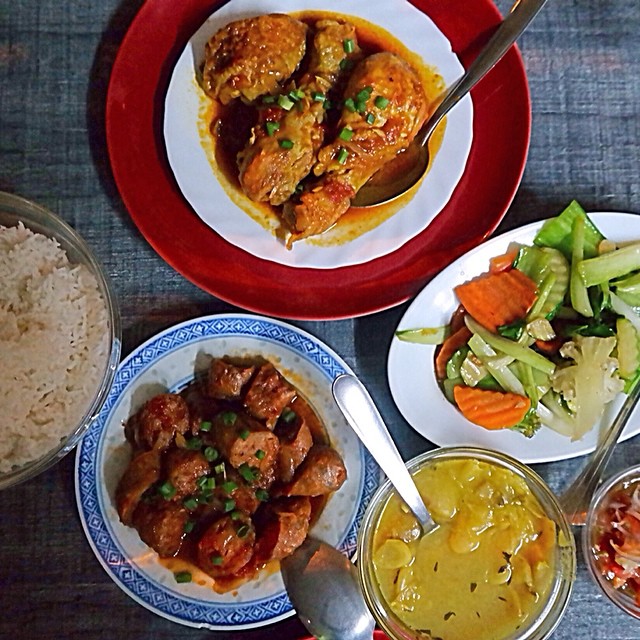 After all that sweetness, it’s time for lunch and cari is what I’m hankering after. It’s declared by many to be the national dish, a less spicy “curry” compared to an Indian version. Caris may contain the ubiquitous goat (cabri massalé), duck, tenrec (a local hedgehog), seafood, chicken and aubergine. The food in Réunion is much like holding a mirror to the cultures that have remained, merged and gently shaped the plate into what it is today.

For all the vocal Réunionnaise allegiance to France, there is uncertainty too when the question of identity materialises. A mixed pot of French – the former colonisers, Indians, Chinese and Malagasies make up the core of society, with everyone born on the island, such as Barniche, known as “Creole”. Though technically, a Creole heritage refers to that of mixed-ethnicity locals like Vitry and Mrs Payet.

While many identify strongly with the mainland, stories of rejection are not uncommon. Yves Severin, co-owner of chambre d’hote Le Grand Pavois Gîte in Les Avirons, smiles. His immense handle bar mustache rises. His ancestors can be traced back to the Anglo-Indian Goan women who arrived as brides in 1763. Severin mentions his struggles with being accepted as French when he fought as an officer in the French army. 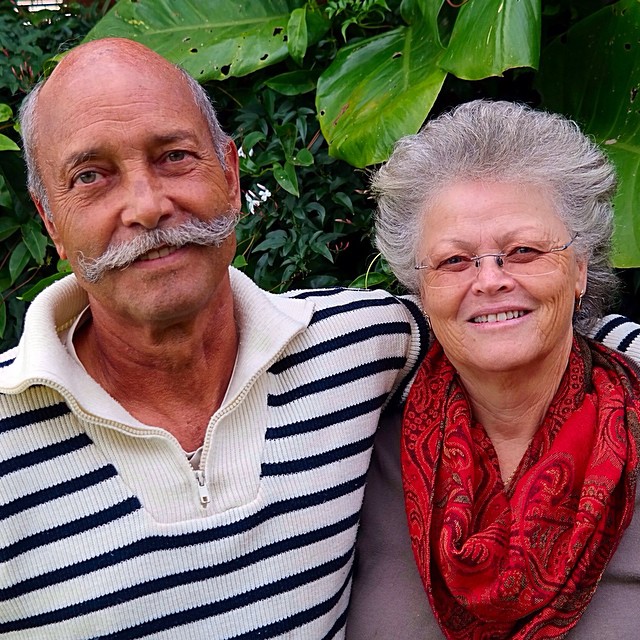 Meet Yves and Elourda Serivin. Yves’ ancestors on his mother’s side can be traced to the Anglo-Indian women from Goa who arrived as brides around 1763. When I ask Elourda about her roots, she laughs and says, “I am endemic!” And lists Malagasy and French ancestors. Locals are very proud of how integrated their cultures are (and for people who say they don’t see differences, they are open to discussing the layers and complications that define establishing identity at the first prompt)

We step out of the kitchen for air, leaving his wife Elourda to tend the pots of zamboukal, a local pilaf and garlicky sausage rougail on a charcoal stove that fills the room with a smoky haze. A passionate home cook, she takes me through the spices and herbs essential to Réunionnaise Creole cookery, such as all spice leaves, turmeric, curry leaves, ginger, garlic, garam massalé (every family has their own treasured recipe) and piment, or chili.

Their son, Sebastian, in his early twenties, faced similar discrimination when he left to work in a factory in the mainland. “I didn’t understand why they were laughing at me when I said I was French. They called me a Kanak,” he says, referencing the indigenous French New Caledonians. He frames it as a statement, more than a query. Sebastian has returned today from an outing with his friends to eat his mother’s food. “It’s the best,” he says to Elourda who beams, covering her smile with her apron. 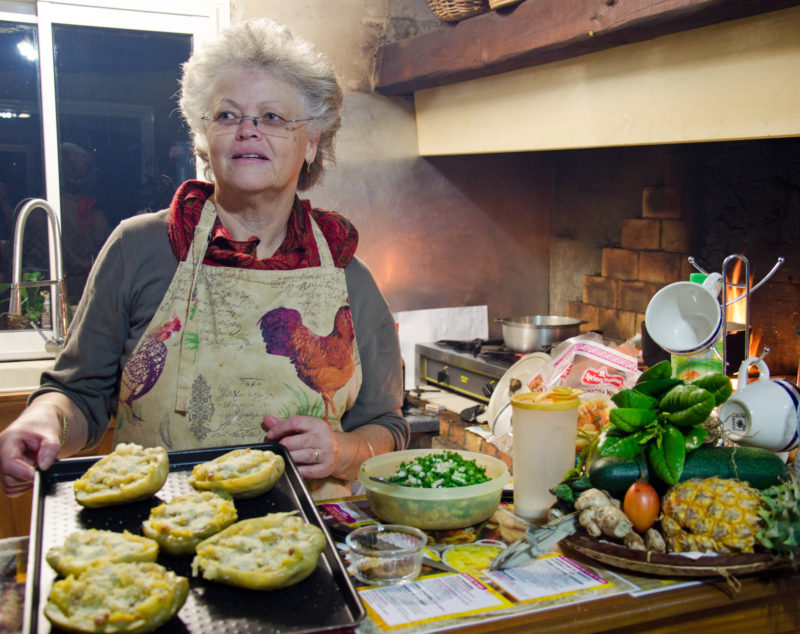 Less showy than the neighbouring islands with glamourous resorts frequented by honeymooners and wealthy families, Réunion is well known for it’s longstanding adventure scene. Think white river rafting, canyoning and abseiling down tricky ravines, rock climbing for seasoned mountaineers and multi-day hikes in remote regions. You’ll find, there aren’t many brochures advertising Réunion’s subtler, heritage and cultural aspects. Partially in pursuit of this, I visit the fine French-style restaurants, traditional boulangeries, rustic beach diners and the chaotic markets groaning with tables of polished produce, freshly churned coconut sorbet and samoussas. However, few places give me the insight into Reunion’s cuisine, culture and the inextricable link to identity, as my visits with Côme, the Severin, Vitry, and other families. As is common wisdom, once you start conversing with the locals, the recommendations for a much-loved stretch of beach, which traditional Creole house accepts guests, which festival (try Cavadi or Deepavali) is the most colourful, what makes a garam massalé exceptional and who makes the best baguette, may overwhelm you. It’s la di lafé, Barniche tells me at one point, the propensity for gossip and chatter on the island, all part of the national pastime: “to discuss”, though in some cases, not altogether a bad thing. 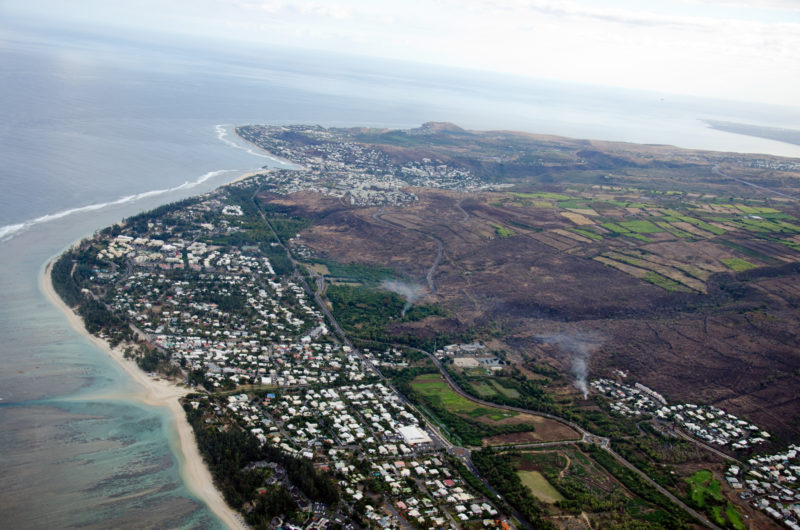 view over the beach, Reunion

Citizens do not require visas to France, but are advised to monitor if changes are applicable to Réunion. 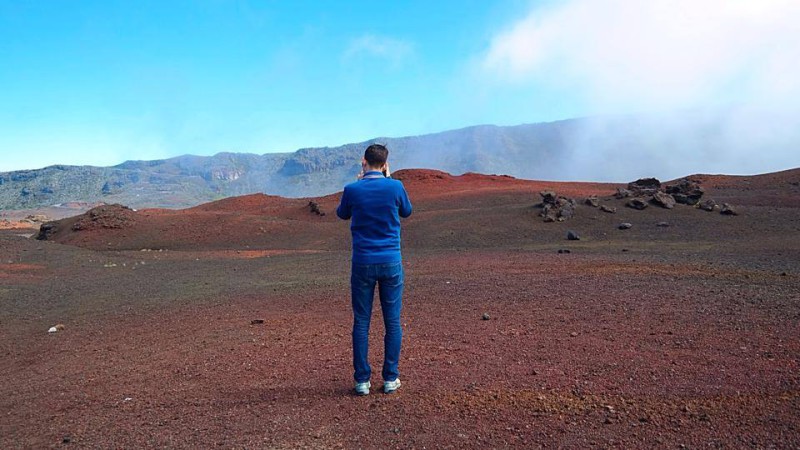 red soil in the volcanic region of Piton de la Fournaise – marvellous Mars-like rocks, flat plains of dusty earth, and craters make you feel like you’re in an ET movie

Le Grand Pavois Gîte (home meal with the family can be arranged). From €200 (780 AED) per room for two for a weekend, including some meals.