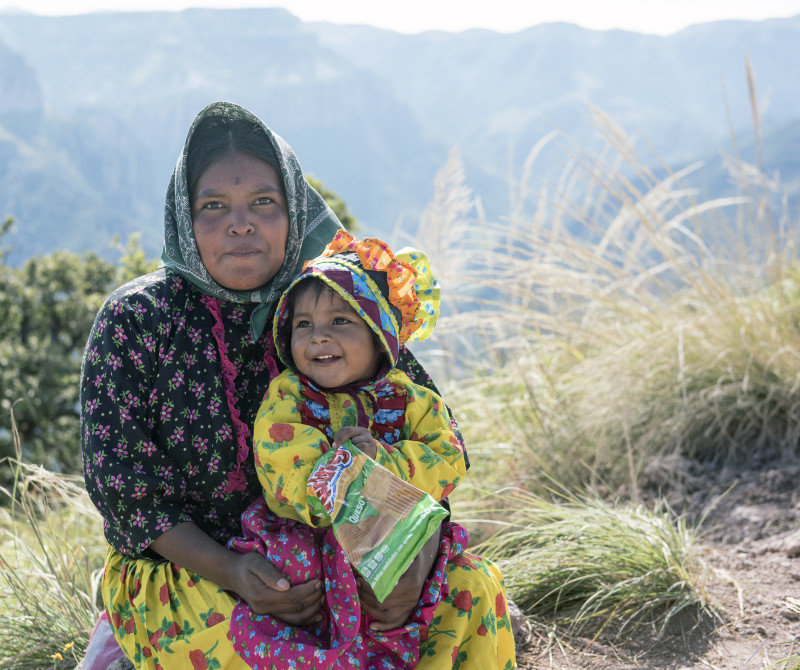 Traversing the spectacular canyons on Mexico’s Copper Canyon on the last passenger ride, Ishay Govender-Ypma meets the reclusive Rarámuri, while learning about the country’s diverse landscape. For Mail & Guardian 26 Feb 2016

The vestibule convulses over the loops at Témoris, shaking us this way and that, but we fasten our grip as we lean out to snatch the views that blur and streak, cameras bouncing from their straps fixed around our necks. Looking behind the train as it scuttles along the switchbacks, we can see the snake-like curve of a bridge suspended over the Septentrion River, and what many consider, along with the Septentrion gorge, the most spectacular portion of the journey. We’re on the El Chepe – the Ferrocarril Chihuahua-Pacifico train, and the last long-distance passenger ride in all of Mexico, traversing the rugged peaks and the twisting, tumbling valleys of northern Mexico. We ride a portion of it in five days, from the pueblo magico or “magic town” of El Fuerte to Cerocahui, along the Copper Canyon – far greater in size and depth than Arizona’s Grand Canyon, and visited by far fewer tourists. 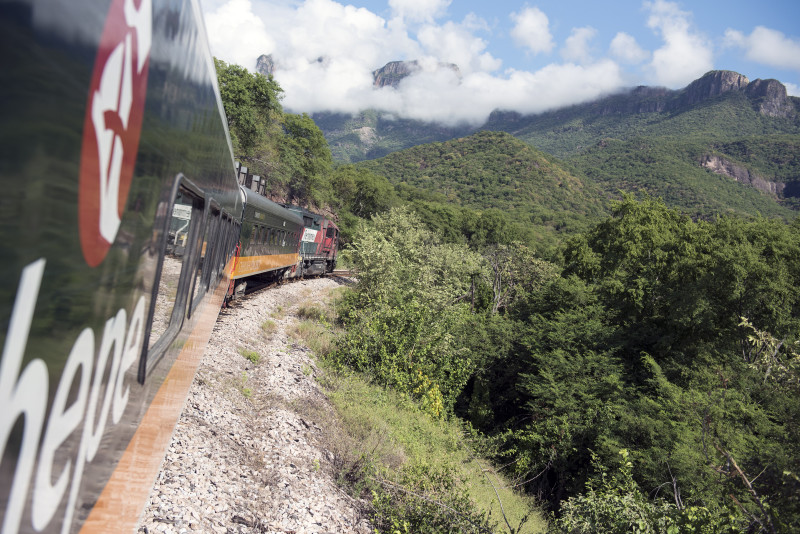 the view sweeps past

Named for its shades of deep russets, burnt oranges and shimmering verdigris (lichen-covered rock, which the Spanish mistook for traces of copper), Mexico’s Copper Canyon is a complex of roughly 20 canyons. As the name ‘Barranca del Cobre’ suggests, the region was once mined for copper and other precious metals by the Spanish in the 17th century. Long before the native Rarámuri people, known be gentle and reclusive, were taken advantage of by the current drug cartels who manipulate them into running drugs up to the U.S border, they were enslaved by the Spanish miners and settlers who expected them to transport goods along treacherous, uninhabitable terrain. Known for their genetic predisposition to long-distance barefoot running, the Rarámuri retreated further into the Sierra Tarahumara, some choosing to live deep in isolated caves. Sharing an ancestry with the Aztecs, the Rarámuri are said to have hunted game for days, chasing after the animals until they tired. In the 2009 book Born to Run: A Hidden Tribe, Superathletes, and the Greatest Race the World Has Never Seen, Christopher McDougall sets out the story about the Rarámuri’s natural talent, sparking the barefoot running movement in the West. Part of my reason for travelling to the Copper Canyon is to understand more about the Rarámuri and their customs. Cristina Hallal, a local and my guide has known some of the people we meet since they were infants.

Sometimes, you’ll find a remote clutch of three or four structures – homes, a latrine, and a shed for animals, perched on the precipice of a vertiginous cliff. The next smallholding may be found hours away, but for the Rarámuri, walking great distances to herd their livestock, fetch wood and supplies or to get to school or work, is second nature. 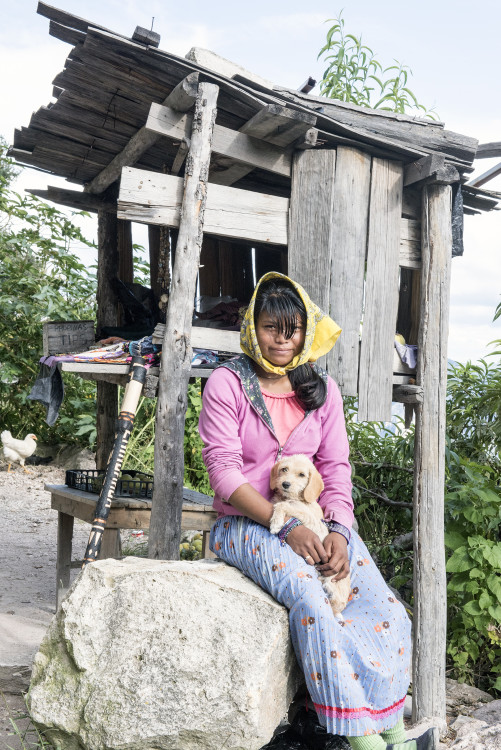 Maria and her puppy

We meet 15-year-old Maria outside her home in Areponápuchi on the first leg of our journey. We’re staying at a lodge 40 minutes away, built high up along the rim of the canyon, with views that embrace the undulating canyons of Urique, Tatatecua and the Copper canyon proper. Playing with her puppy, a wretched, whimpering creature, Maria’s alone today. She shows us the baskets and wristbands she weaves under her mother’s instruction. All along the Copper Canyon route, when the train stops, women and girls rush towards the windows and exits, clad in colourful dresses and head scarves, thrusting small baskets woven from the endemic sotol, similar to agave, dyed pink and green or red, and packets of apples and peaches up towards the passengers for inspection. In a flash, money changes hands and the women and girls retreat from the platform as the train thrusts forward. At 15, the age many Rarámuri girls marry and leave school, Maria is expected to learn this trade to help to support her own family. The baskets smell sweetly of the sotol, and weaving takes weeks, a task learnt at a mother’s feet over the course of years. Dyed with natural pigments in wide buckets outside the home, Maria shows us the dark pools of stagnant colour that the sotol leaves are dipped into. The puppy nips at Maria’s skirt and she lifts it onto her lap, hiding behind her long fringe. Her mother and grandmother are out collecting wood and will be back soon, she tells Cristina in Spanish. Many older indigenous folk converse only in their own dialect, with very scant knowledge of Spanish. On the way back to the lodge, walking through pine forests, we meet Naty, an older woman who deftly weaves larger baskets and sets of coasters, sitting on the ground in front of her wares. A group of American visitors from Texas prod the goods, haggling for cheaper prices and she looks on wordlessly. 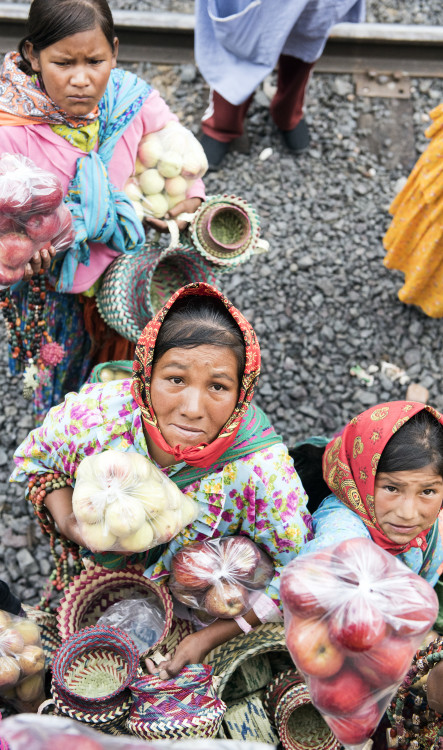 The next day we board the train to Cerocahui, a village with not much more than a church, a missionary boarding school, a grocer and, important for us, a tiny cyber-café (“Sin Facebook!” a sign inside reads), established at the site of the former public payphone which the town acquired in 1998. Electricity followed in 2001, Cristina tells me, and the road from our lodge, the rustic family-run Paraiso del Osos in Bahuichivo

Valley 15 minutes away, was only tarred in 2014. I’m starting to appreciate the things we take for granted in cities and towns, reminding myself of this when the water runs cold in the shower in the mornings. The temperatures in the canyon surprise me too – crisp and ski-jacket cold high up the mountains and moderate to blazing in other parts. This isn’t the tropical Mexico seen in spring-break summer movies. 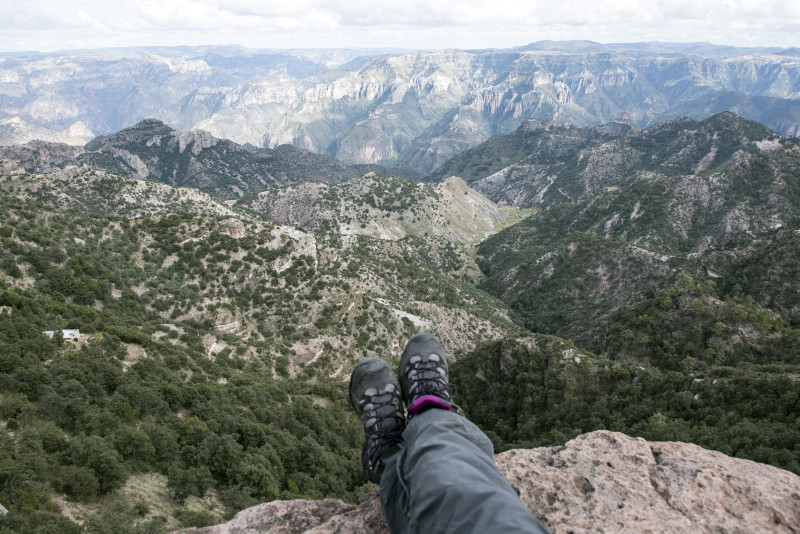 Above the lodge, a large figure of what looks like a friendly Yogi bear looms on the mountain. We decide not to hike up, but venture instead to the Cave of the Crosses, a former Rarámuri dwelling where, according to Cristina and locals in the area, the remains of a mass human burial lie. Human bones are stacked in piles under an eerie sight of 52 white crosses painted on the cave wall. We walk away silently through a leaf-lined forest carpet and a small, slow river, contemplating their demise.

The following day, in comparison, has us in high spirits. We hop into a rough-n-tough 4 x 4, and drive to the Copper Canyon Adventure park where, from the Flying Rock in Divisadero, we take in knee-weakening views of the canyon that plummet to what must surely be the earth’s centre. I’m too afraid to actually walk across the rock that the park warns is done entirely at one’s own risk. A 15-minute ride on the teleferico cable car (far easier on the nerves than zip-lining) takes us across the mountain for expansive views and a little time to chat with a Rarámuri woman and her toddler. 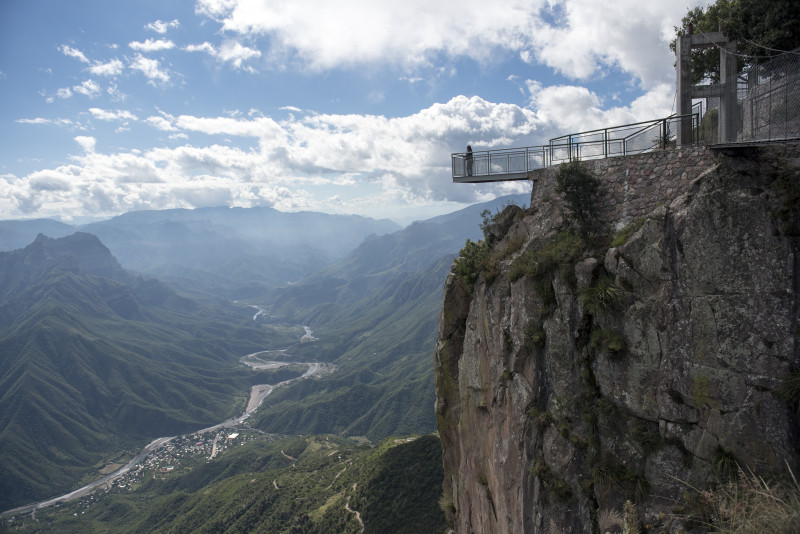 Later, from a suspension bridge we view the three canyons converging, a spellbinding view of volcanic rock covered in lush verdant grasses and shrubs. From the Cero Del Gallego, 25 kilometres from Cerocahui, up hairpin bends and unpaved asphalt, the 4 x 4 brings us safely to what must be one of the ultimate viewing points in the canyon. From the protruding skinny metal platform, as delicate as a sliver of glass, we peer into the depths of the Urique Canyon. “Would you like to drive down to the bottom?” Cristina offers.

In the old days, she tells me, people thought that you ran the risk of going mad or losing your life to the dark side, as only birds and later small planes, ventured down. “I’m pretty happy up here for now,” I tell her, glancing down one last time.