One Day in Istanbul

For ancient history and culture enthusiasts, adventurous eaters and bargain hunters, Istanbul is the ideal destination for a vibrant vacation. Immerse yourself in old traditions juxtaposed with new trends. Ishay Govender-Ypma explores. For Sure Travel Journey Magazine. 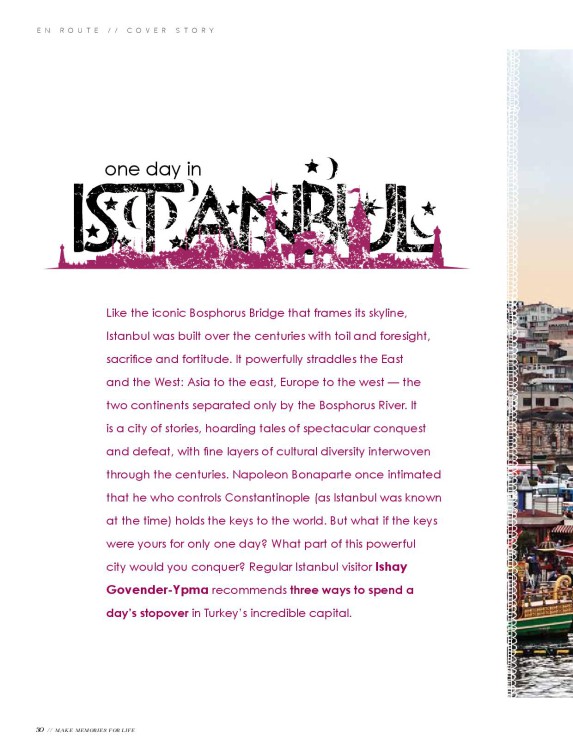 For one night only

On my most recent visit to Istanbul, I stayed for just one night. What could one possibly enjoy of a city so dense in historic landmarks, gastronomy and leisure, bargaining-games and bustle in a single night, you may wonder. Napoleon Bonaparte had once intimated that he who controls Constantinople, as the city was known at the time, holds the keys to the world. In spite of the scent of political revolution and economic crisis never being far off in the recent years, the sentiment remains. Istanbul, like a bridge built over the centuries with toil and foresight, sacrifice and fortitude, powerfully straddles the east (Asia) and west (Europe). It is a storied city hoarding tales of spectacular conquest and defeat, reform and the fine layers of interwoven cultural diversity that make it complex, challenging and ultimately satisfying. In my defence I had the option of catching an immediate connecting flight that evening or leaving in the morning, and it was with no hesitation that I chose the latter. A meal in the city, taking in the billowing call of the muezzin and the thousands of twinkling lights as they emerge, reflected across the Golden Horn of the mighty Bosphorus River, where the strait meets the Marmara Sea – it was a travel indulgence I felt that could not be denied. 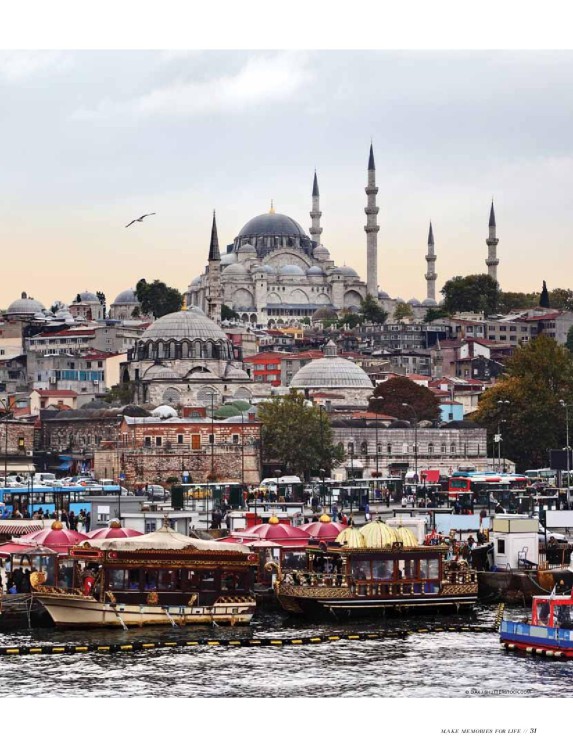 I’ve stayed across the western region – in old Pera, gentrifying Beyoğlu and hip Galata. On my first visit, however, I settled amongst the well-worn cobbled streets in Sultanahmet, a popular, if overcrowded and overpriced tourist area. For a first visit, Sultanahmet makes an ideal base – a mixture of Roman, Byzantine, Ottoman and latter day architecture and history delightfully coiled together.

Perhaps the greatest of the landmark monuments in the area is the handsome Aya Sofia, which started its life as a grand Byzantine cathedral commissioned by Justinian the Great. It was converted into a mosque centuries later. Today it serves as a museum and while the faded red exterior may appear underwhelming, the interior is magnificent. Detailed mosaic portraits, a dome that pushes heavenward, the visually arresting nave and sunlight streaming through the windows bouncing off the golden mosaics, captivate the senses.

Explore the Basilica Cistern that lies below the Aya Sofia, also commissioned by Emperor Justinian. It’s an intricate, long-disused system of aqueducts that reach as far as the Belgrade Forest. The two vast upturned Medusa heads provide an arresting backdrop for photographers. James Bond aficionados may recognise it from the 1963 film From Russia with Love.

Close to the Aya Sofia are the grand Topkapi Palace and the iconic Sultanahmet Camii or Blue Mosque, and you can realistically visit all three over a full day. Do expect incessant crowds though. Topkapi Palace can be an overwhelming museum to navigate in both physical expanse and extent of the extravagant lives lived by the sultans of the Ottoman Empire. There are some outstanding viewing points at the palace like the marble terrace in the fourth court. The harem wing calls for separate tickets and is worth the guided tour (runs every half hour) into a world that remains forbidden, yet curiously beguiling.

The Blue Mosque derives its name from the 21 000 decorative blue Ìznik tiles adoring the interior. Its sturdy dome and six slim minarets soar prominently against the Istanbul skyline. As a working mosque, modest dress, headscarves for women and removing shoes are requirements. The best views walking in are enjoyed through the Hippodrome approach – the horse and chariot racetrack loved by the adrenaline-obsessed Byzantine rulers.

You may choose to soldier on to the Grand Bazaar, which you can walk to in around 20 minutes. By this point, I’m only good for a large kebab meal, a cold glass of wine and a wedge of watermelon from the vendors around the mosque.

Bus, Boat and on Land

The hop-on-hop-off bus tour makes a range of the city’s best sites easily accessible (and conveniently starts at Sultanahmet Square). You could just sit tight and enjoy the views; the sprawling hillside Rumeli Fortress, built by Sultan Mehmed II before he conquered Constantinople, a particular favourite of mine.

The picturesque way to enjoy modern Istanbul is by ferry, as you leave the European side at Eminönü and venture to the Asian part (a must). For a few lira you’ll witness the magnitude and physical contrasts of the city sweep by in 15 minutes. A longer sunset cruise – a two-hour or full day meander along the Bosphorus, is what memories are made of. That, and pounding the paths that will lead you to familiar guidebook landmarks as well as lesser-documented everyday life. Crossing the Galata Bridge with its rows of fishermen and selfie-posers is a delight. Istanbul, though very steep in parts, is city made for walkers. 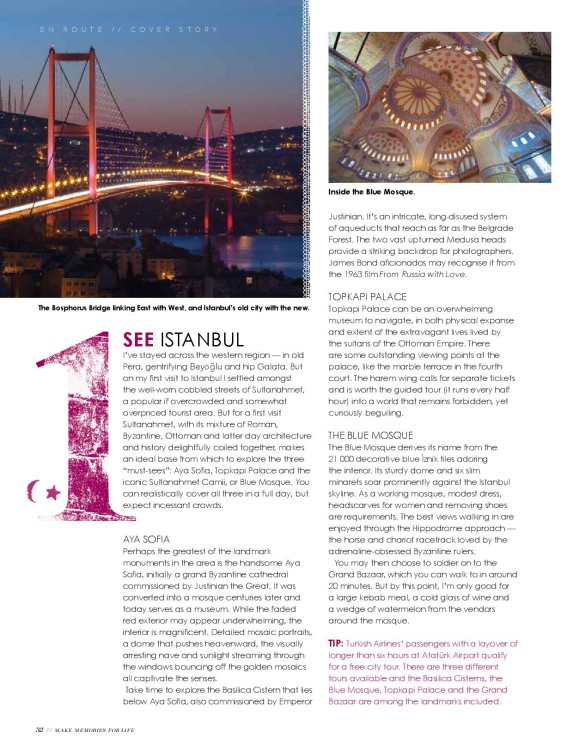 There’s no sweeter way to enjoy and understand the cultural composition of a region, than by sampling its star dishes. Istanbul is popularly known for its rainbow selection of lokum (Turkish delight), smoky kebabs, crisp syrupy baklava and wickedly thick Turkish coffee. The morning starts with breakfast vendors in the red municipal-approved carts selling crusty sandwich rolls with feta, string cheese, sliced tomatoes, olive paste, and my personal favourite: soft rolls with kaymak – buffalo clotted cream and honey. Simit, the soft sesame-encrusted pretzel-shaped bread, similar to a light bagel can be found in carts and bakeries across the city, often arriving in fresh batches that sell out quickly. With short glasses of strong, sweet tea (you’ll find city-wide tea messengers delivering trays of tea to just about everyone) it makes for the perfect snack.

Seasonal fruit and vegetables like salted cucumbers, boiled corn and watermelon, vendors who peel and core apples, as well as roasted almond, pistachio and chestnut sellers give a healthy spin to fast food.

I’ve joined the locals numerous times waiting at noon at street-side grill-carts for kokoreç – lamb’s intestines filled with chopped up sweetbreads or offal like hearts and kidneys, slowly rotated on spits over a charcoal fire. Kokoreç is served in a slice or chopped up and sprinkled with sweet paprika.  If you’ve been partying in Beyoğlu or around Taksim, march to an all-night soup shop serving işkembe çorbası, a thin sheep-intestine soup with a squeeze of lemon and a spoonful of chopped garlic. You can have the sheep-head too, and local’s swear by its restorative powers. 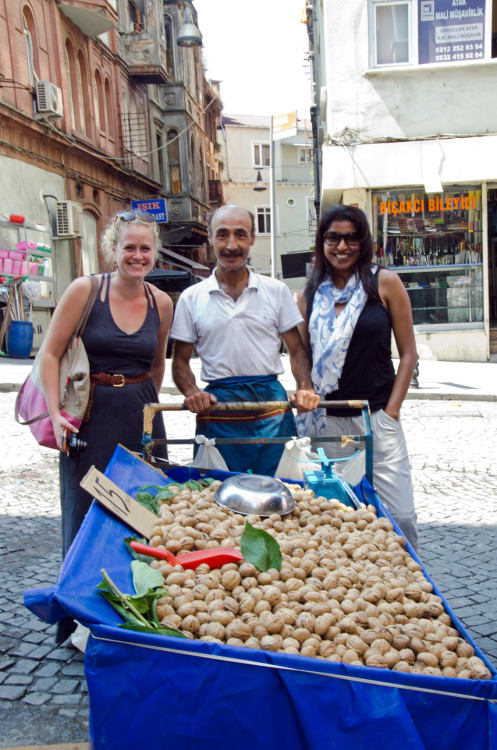 If this isn’t your scene, perhaps you’d prefer a slice of tavuk göğsü, a mild, creamy pudding made from little more than fresh milk, sugar, corn-starch and poached chicken breast. When made well it’s smooth and delicious, served with a sprinkling of cinnamon on top. A similar version, called kazandibi which originated when the chicken pudding “burnt” at the bottom of the pot, with the caramelised layer folded over to the top, is also excellent.

The best way to get your bearings on the Istanbul food scene, and indulge in a mix of Western-approved favourites like döner kebab, balik ekmek – mackerel sandwiches and pide – filled folded pizza breads, as well as the locals’ picks like kokoreç, tavuk göğsü and boza – a creamy, lemony fermented millet drink, is to join a walking food tour. Let a local take you to their favourite places across various suburbs, while feeding and filing you in on the history, myths, tall tales and finest artisans. 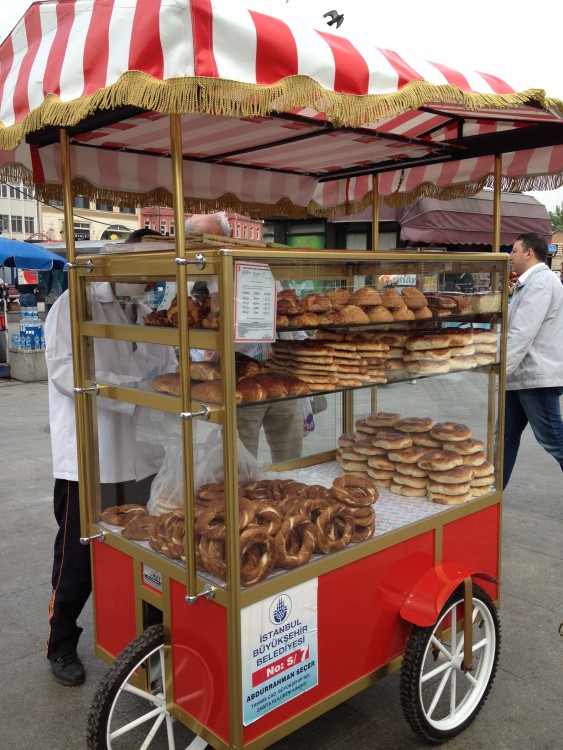 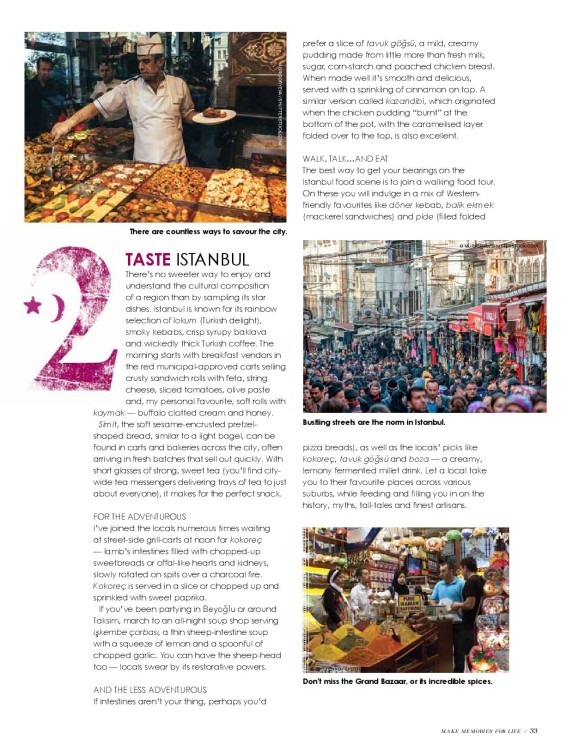 Little can imitate the chaotic atmosphere and pulsating energy within the covered Grand Bazaar. With a mix of textiles and leather goods made in the time-honoured ways, homeware, precious kilims, jewellery, silverware and cheap knick-knacks, its’ hard not to get drawn in when the vendors invite you “just to look.” They expect you to bargain and its common to knock two thirds off the asking price to start. Fixed price shops and small artisanal boutiques won’t budge, but most are happy to work out a deal for you. It’s a good place to start your shopping experience in Istanbul.

The mostly fixed-price Egyptian Spice Market, around since the Ottoman era, shouldn’t be missed. Higher prices, lines of locals and a vacuum-packing service are clues to the quality. I bring back Iranian saffron, sweet and hot chilli pepper flakes, spice blends, sumac and loose leaf teas. Ucuzcular Baharat (www.ucuzcularspices.com/) at shop number 51 is a good bet.

Paying in Turkish lira at both markets will ensure you don’t get short-changed over a shoddy exhange rate deal.

For small-name local designers, quirky stationery, modern handmade shoes, edgy vintage sunglasses and hippie bell-bottom dungarees, I rummage through the Galata area. Off the main drags that sell touristy trinkets there are small coffee shops and teeny boutiques teeming with hipsters. If you’re weary from shopping, gaze at the numerous street art murals or visit the fairy-tale Galata tower with its panoramic views over Istanbul. The restaurant at the top is worth the lira, and a good place to contemplate your return visit to cosmopolitan, captivating Istanbul. 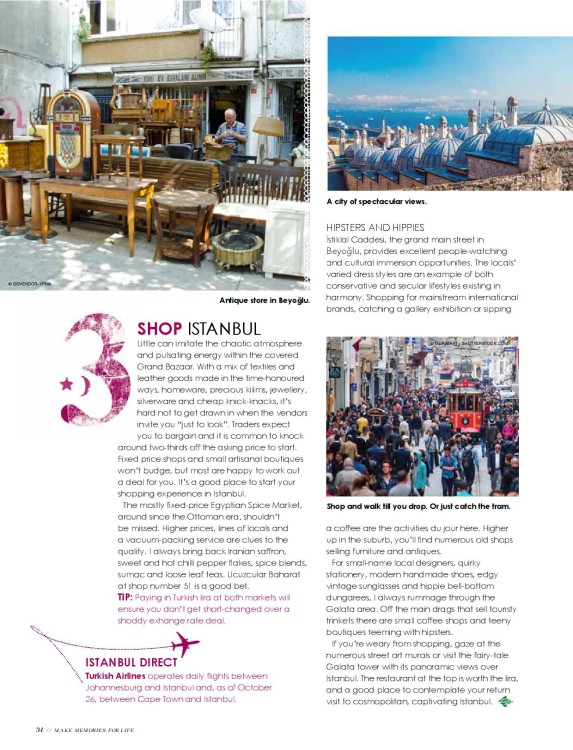 All shopped out? Treat your body to a luxurious Turkish steam bath and scrub, a hamam at Ayasofya Hamam (founded 1556): www.ayasofyahamami.com.

Or, catch a famed Whirling Dervish show at the Hodjapasha Dance Theater: www.hodjapasha.com. 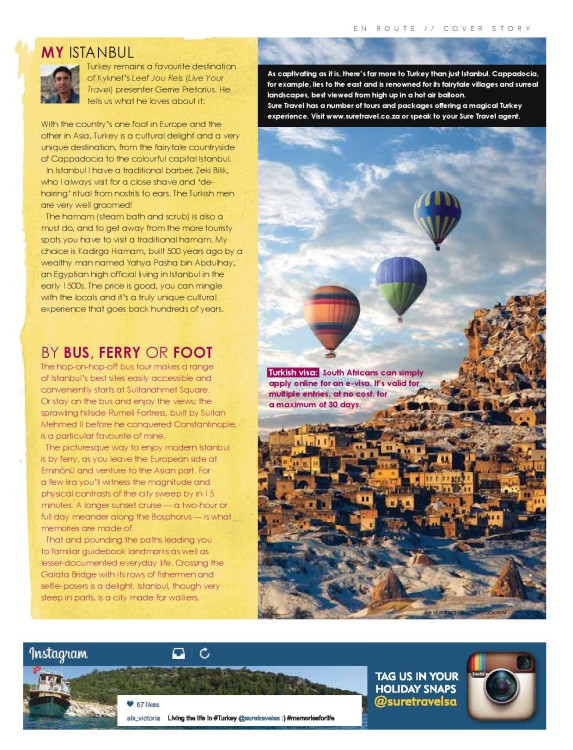