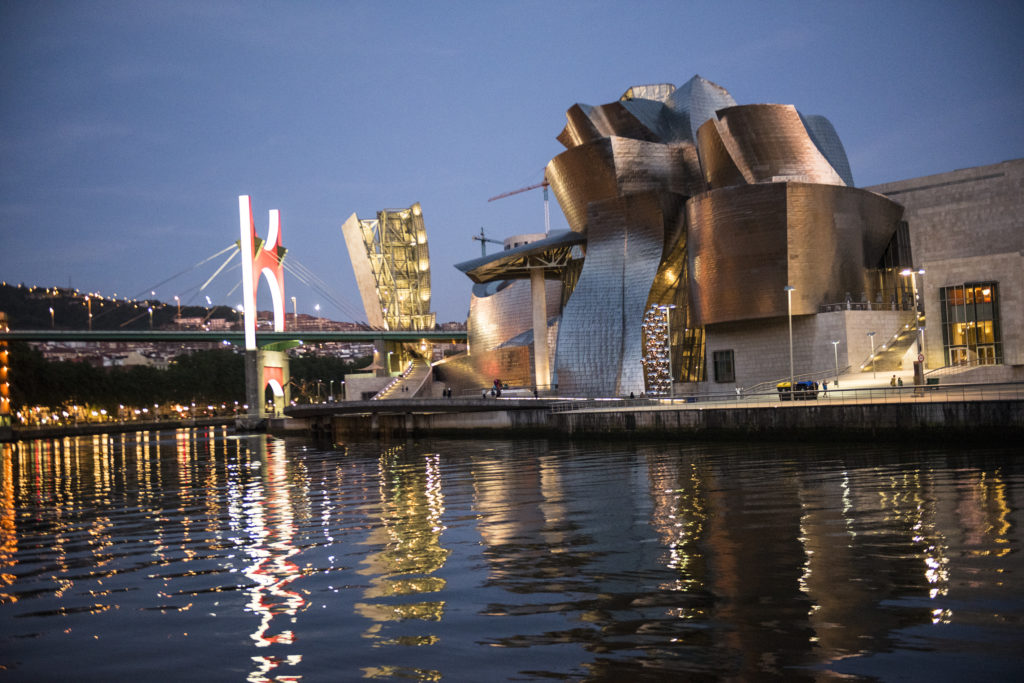 Visit the highlights in Spain’s Basque Country to enjoy the best in architecture and cultural heritage. (@IshayGovender), for The National, Aug 2018

Three weeks in the Basque Country, an autonomous region in northern Spain, where the icy waves of the Bay of Biscay meet the misty green valleys, may be longer than most tourists are willing to spend, but I, being there to both work and explore, wanted to do it at leisure.

The Basque region is famous for its fine dining restaurants and pintxo-decked eateries, where you select a toothpick-skewered snack from a dizzying array on bar counters and move on to the next until your appetite is stimulated sufficiently for a late dinner. I wanted to enjoy it all: the famous fried Guernica green chilli peppers at low-key neighbourhood bars, Michelin-starred cuisine at Mugaritz, Etxebarri, Arzak and Azurmendi, and the best of Basque design and striking architecture. To this end, I based myself in Bilbao and later, San Sebastian, or Donostia as it’s known locally.

Before it was constructed in 1997, architect Frank Gehry’s spectacular Guggenheim Museum in Bilbao was still a dozy shipping and industrial hub once known for its iron mines, slinking beneath the frequent fog and drizzle that sheaths the city. The museum’s shimmer of metallic ribbons as dramatic as a Balenciaga haute couture frock, and curves that shimmy as you circumnavigate the building, give way to what ultimately resembles a ship – a fitting symbol for the port city. Incidentally, the city’s concert and conference hall Euskalduna Palacio, which hosted over 1000 guests for the World’s 50 Best Restaurant awards in June and was built by the Madrid-Basque duo Federico Soriano and Dolores Palacios, resembles a ship in construction, an ode to the space’s former purpose. 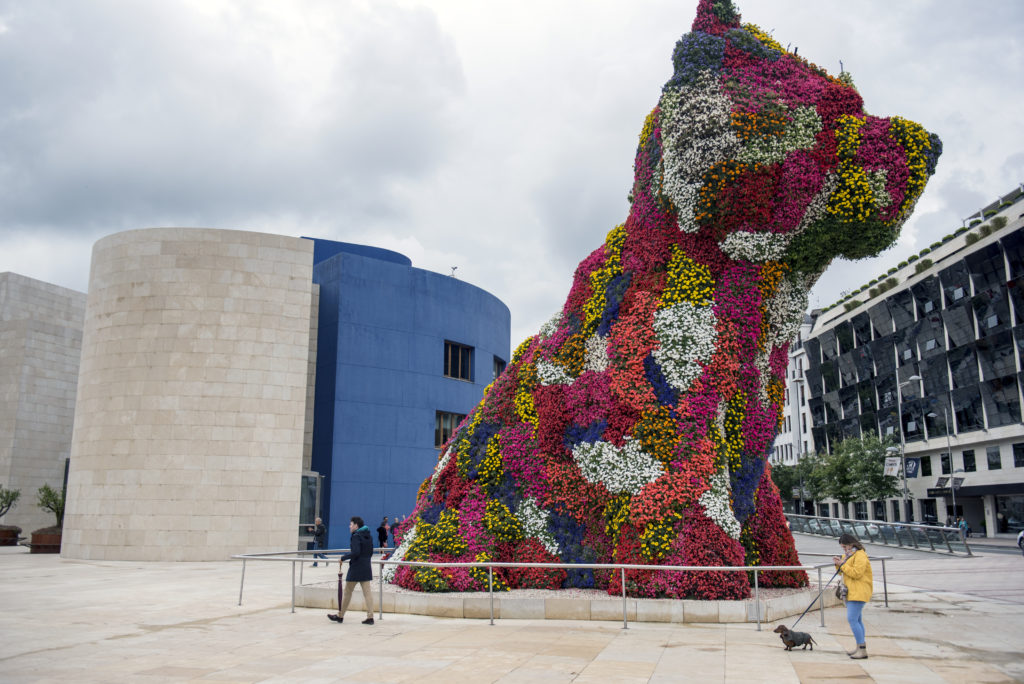 The Puppy by Jeff Koons, outside the Guggenheim

The Guggenheim, when seen from near the rouge arch of the Puente de la Salve on a sunny afternoon or early evening in summer when the skies are cloudless and that rare deep blue, makes me feel as if I am standing on a platform, waving goodbye to a fantasy ship with titanium fish scales. A glass-and-steel tower behind the bridge resembles a sail. When viewed from Mount Artxanda accessed by a funicular first built at the turn of the 19th Century, the Guggenheim contrasts, but only just, against the sedate buildings that dot the city’s landscape, with verdant hills enclosing it. The Iberdrola Tower also defies the uniformity, rising above traditional terracotta roofs. To get to the funicular you can walk up the pedestrian footbridge, Zubizuri, created by architect Santiago Calatrava, which resembles a brilliant white sail that fans over the Nervion River.

Tour guide and interior designer Alfonso de Lecea tells me that many residents were incensed when the Guggenheim was being built: “too ostentatious, too out of place,” they said. Now, not only are locals immensely proud, but they can see how the design, two decades down the line, remains timeless, elegant, thrilling even. “And still, no leaks,” de Lecea, who’s given tours to art lovers the world-over, adds with a smile. 2017 alone saw 1.3 million visitors. The ‘Bilbao Effect’ a term referring to an iconic architectural piece paid for by a city, having the power to uplift the economy, has been widely discussed and replicated. And the city is now one of the wealthiest in Spain. Grabbing my attention is Richard Serra’s Matter of Time, a permanent installation on the cavernous ground floor, the Art and China After 1989 hall and Joana Vasconcelos’ Egeria, representing the female guardian, a multi-hued textile installation spreading through the atrium.

At a recent panel discussion at the Guggenheim called Food Meets Art facilitated by the museum’s curator Marta Arzak (related to the Arzaks of gastronomic fame in neighbouring San Sebastian), designer Guilio Cappellini said: “Here we are, in one of the most important and famous buildings worldwide. You know why it’s successful? Because the designer took the risk to be innovative. It is inspiration drawn from the natural elements, the landscape and even the food here, because it reflects the heritage, the culture.” 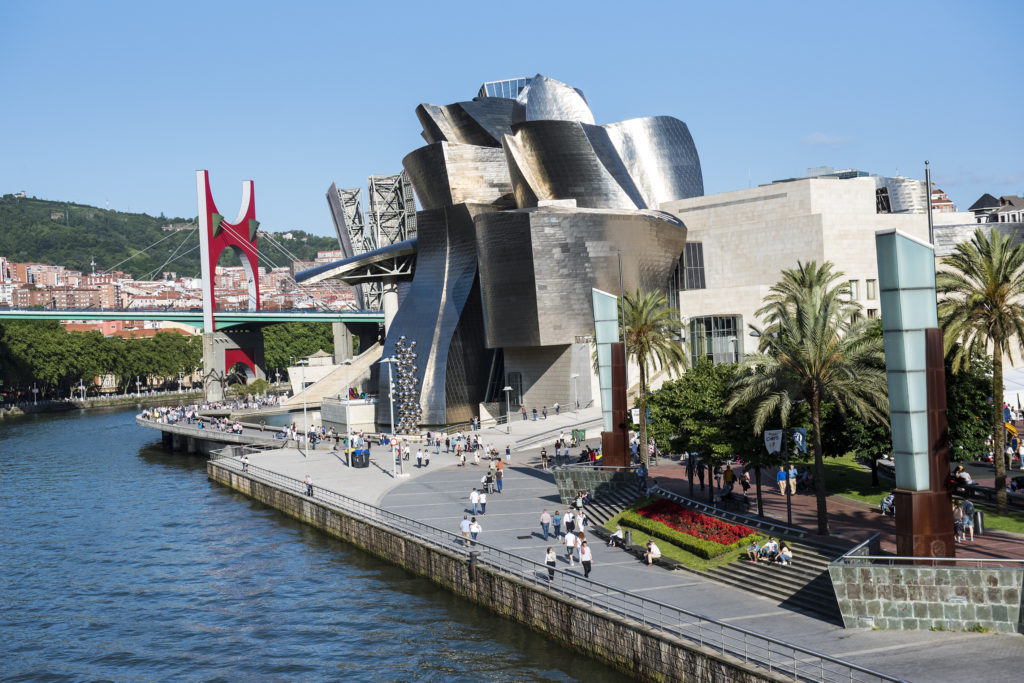 The museum appears like a ship docked at port.

The Basque people, whose origins still remain unknown, are as a collective, protective of their cultural identity. They speak a different language too, called Euskara that was at risk of disappearing when its use was forbidden under the Franco regime. After generations of wars and repression and with a cease-fire that brought nationalistic-based terrorism to a halt only in 2011, many are reclaiming both language and cultural identity. Local journalist Aitziber

“For us it’s our language, our food, our sports, our history. For so long it was denied to us, so many people here feel a renewed sense of pride in [our] national heritage.”

At a txoko, a secret gastronomic society in Bilbao, de Lecea, who invited me to dinner with his closest friends one evening, said: “There are so many stories out there about us Basques. Yes, it’s true they say if you give us a kitchen anywhere we go, we’ll be happy, because that’s what we love to do – to cook and to gather. To anyone visiting, I say: ‘mix with the locals’. It’s the best way to know us.”

On one road trip, we drove to Guernica, where a tile mural replica of Picasso’s painting, named after the town, represents the devastating aerial bombing that occurred during the Spanish Civil War. Just 15-minutes away lies the ethereal painted forest of Oma, where painter and sculptor Agustín Ibarrola has created a unique “open air museum” of kaleidoscopic painted pine trees. The mysterious imagery is meant to link with the Palaeolithic art in the nearby Santimamiñe caves. We skipped the caves and drove onwards to Getaria, stopping at Ondarroa to take a snap of the sculpture: Women Workers of the Sea, dedicated to the often forgotten women who have powered the Basque Country’s famous fishing industry. Many will agree that the tinned tuna and anchovies from the Cantabrian coast are exceptional and earlier that week, I got a first-hand examination of the process at family-run Conservas Serrats in Bermeo, 30 minutes out of Bilbao. At pintxo bars, if there was a gilda – a small skewer made of an anchovy fillet – sometimes vinegary, sometimes salty, a guindilla pepper and Manzanilla olives, I’d order a stack of them. 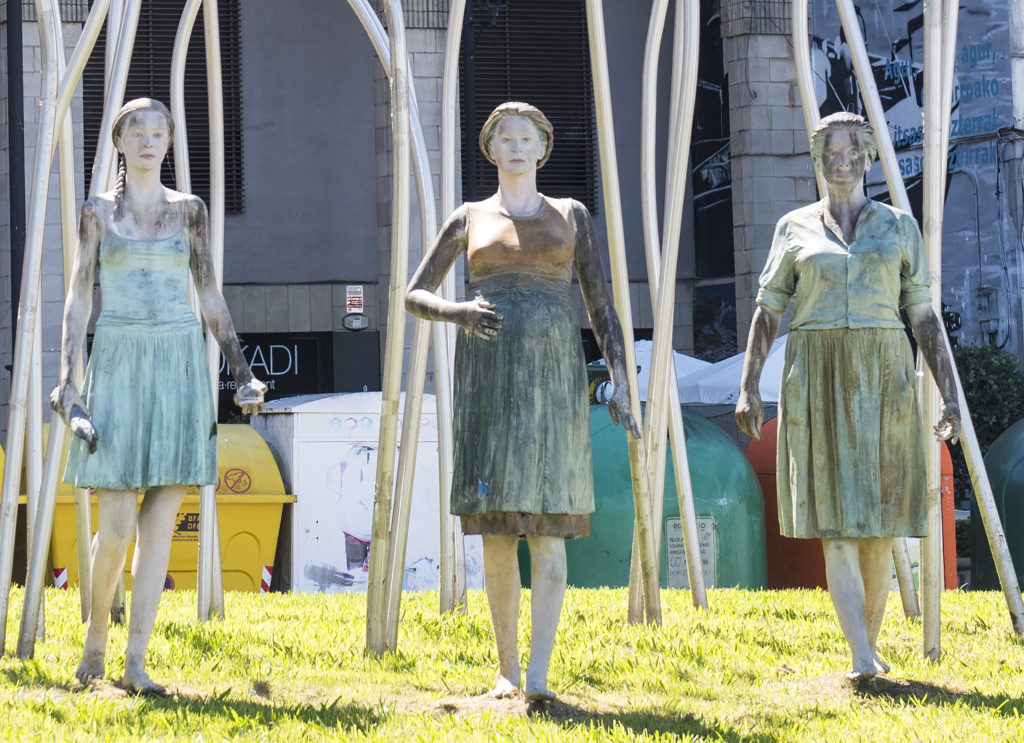 Women Workers of the Sea in the town of Ondarroa

At the coastal fishing village of Getaria, two things stood out for me – a sensational dinner at Elkano restaurant where a whole chargrilled turbot is presented at the table and dissected in a way that you enjoy every bit, and secondly, perhaps unexpected in the surrounds, a homage to son-of-the-soil Cristóbal Balenciaga in a museum that embraces the old and new. Attached to the 19th Century summer villa of the Marquis and Marquesa of Casa Torres (Balenciaga’s mother was their seamstress, and later he became their tailor), the undulating, matt black Balenciaga museum draws hordes of fashion and art fans.

A rare heat-wave hits when we visited pintxo-capital San Sebastian and it appears that locals go to lengths to cancel regular plans and make their way to the sparkling beaches at Playa Ondaretta, Playa de la Concha and Gros. Seen from Monte Igueldo (you can drive, hike or take the old-timey funicular up), the images of cerulean waters and diamond-dusted white sand played out like a tropical fantasy, which locals tell me the Basque Country, known for its fog and drizzle, never usually resembles.

From the late 19th Century palace gardens, Palacio de Miramar, in San Sebastian, commissioned by the Spanish Royal family, I sat with locals, watching the bathers at Playa de la Concha below, once the queen’s spot for a refreshing salty dip. Eating olives and slivers of Idiazabal sheep’s milk cheese, I thought about de Lecea’s words at the txoko the week before: “The best of Basque Country is yet to come.” 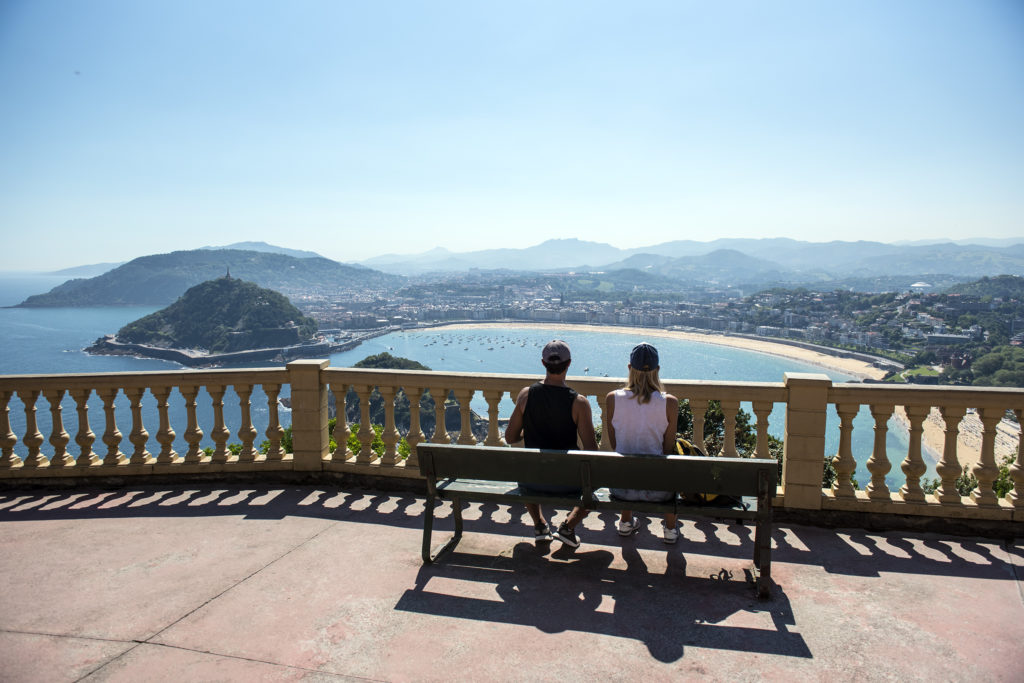 Fly Emirates (www.emirates.com) to Madrid (there are two flights daily), then catch a flight on Air Europa (www.aireuropa.com) to Bilbao, from Dh3995 in total, return.

Book an architectural tour in Bilbao: www.artchitectours.com/tour/tours-in-bilbao (prices on request), or a tailor-made private history, art and food tour with Esther Boulandier, from €160 for two hours for two people: e.boul@hotmail.com