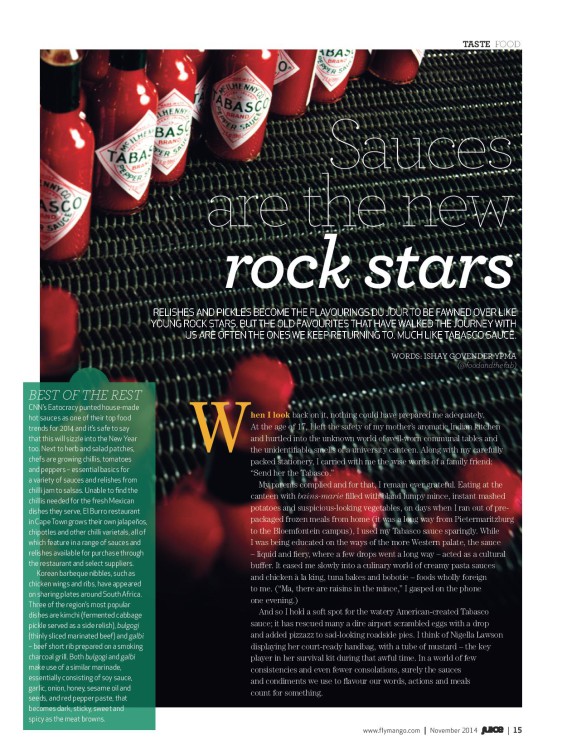 Send her the Tabasco

When I look back on it, nothing could adequately have prepared me. At the age of 17, I left the snug-safety of my mother’s aromatic Indian kitchen and hurtled into the unknown world of well-worn communal tables and the unidentifiable smells of a university dormitory canteen. Along with my carefully packed stationery, I carried with me the wise words of a family friend: “Send her the Tabasco”. The hot sauce held my life together, in a way.

My parents complied, and for that I remain ever grateful. Eating at the canteen with bains-maries filled with bland lumpy mince, instant mashed potato and suspicious looking vegetables, on days when I ran out of pre-packaged frozen meals from home (it was a long way from Pietermaritzburg to the Bloemfontein campus), I used my Tabasco sauce sparingly.

While I was being educated in the ways of the more Western palate, the sauce – liquid and fiery, where a few drops went a long way, acted as a cultural buffer. It eased me slowly into a culinary world of creamy pasta sauces and chicken à la King, tuna bakes and bobotie – foods wholly foreign to my palate. (“Ma, there are raisins in the mince”, I gasped on the phone one evening.)

To this very day, I hold a soft spot for the watery American-created Tabasco sauce – it has rescued many a dire airport scrambled egg meal with just a drop, and added pizazz to sad-looking roadside pies. I think of Nigella Lawson displaying her court-ready handbag, with a tube of mustard, the key player in her survival kit during that awful time. In a world of few consistencies and ever fewer consolations, surely the sauces and condiments we use to flavour our words, our actions and our meals, count for something. Relishes and pickles become the flavourings du jour to be fawned over like young rock stars, but the old favourites that have walked the journey with us are often the ones we keep returning to. Much like Tabasco sauce. 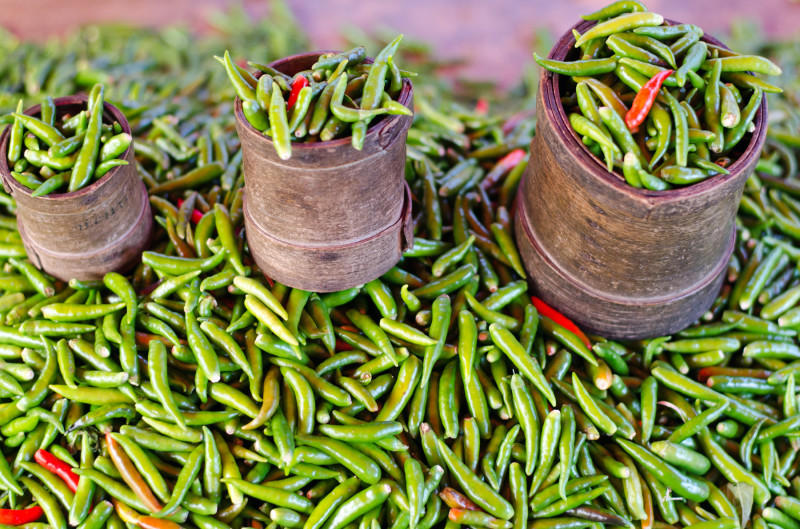 No sauce, on any trend list over the years has received as much attention and online dedication as sriracha (pronounced: see-rah-jah) has. A quick search will yield recipes for endless homemade versions, spicy ice creams, candy and tingly chicken wings to fill umpteen folders.

The sauce has its origins in eastern Thailand but was made popular in the West by Vietnamese-American founder David Tran and his Californian based Huy Fong Foods Company bearing the emblematic rooster, the name commonly given to the sauce. Bon Appetit magazine lauded the sauce, made of red jalapeño chilli peppers, garlic, distilled vinegar and salt its ingredient of the year in 2010 and it has received continued support from the culinary world since. Customers were awash with panic in late 2013 when the factory was faced with an order to shut down due to complaints by the Irwindale, California residents about irritating odours caused by the chillis. The factory is, by all accounts, up and running and demands for rooster sauce continue to be high. There are several versions available, also in Asian supermarkets in South Africa, but sriracha connoisseurs, like my friend Corina, a hot sauce faithful, swear by the original. 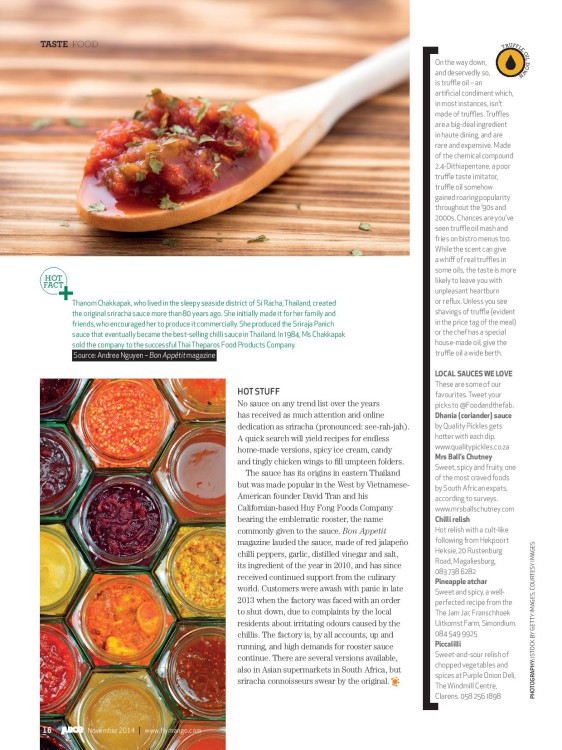 Ms Thanom Chakkapak who lived in the sleepy seaside district of Si Racha, Thailand, created the original sriracha sauce over 80 years ago. She initially made it for her family and friends, who encouraged her to produce it commercially. She produced the Sriraja Panich sauce that eventually became the best-selling chilli sauce in Thailand. In 1984, Ms Chakkapak sold the company to the very successful Thai Theparos Food Products Company – source Andrea Nguyen, Bon Appetit Magazine.

Best of the Rest

CNN’s Eatocracy punted house-made hot sauces as one of their top food trends for 2014, and it’s safe to say that this will sizzle on into the New Year too. Next to herb and salad patches, chefs are growing chillis, tomatoes and peppers – essential basics for a variety of sauces and relishes from chilli jam to salsas. Unable to find the chillis needed for the fresh Mexican dishes they serve, El Burro restaurant in Cape Town, grows their own jalapeños, chipotles and other chilli varietals, all of which feature in a range of sauces and relishes available for purchase through the restaurant and select suppliers.

Korean barbeque nibbles like chicken wings and ribs have appeared on sharing plates around South Africa and three of the regions’ most popular dishes are kimchee – fermented cabbage pickle served as a side relish, bulgogi – thinly sliced, marinated beef and galbi – beef short rib prepared on a smoking charcoal grill. Both bulgogi and galbi make use of a similar marinade, essentially consisting of soy sauce, garlic, onion, honey, sesame oil and seeds and red pepper paste that becomes dark, sticky, sweet and spicy as the meat browns. The sauce is known popularly as Korean barbeque sauce.

Chinese XO sauce, which was developed in the 1980s in Hong Kong, is a potent mix of dried chilli peppers, scallops, ham, shrimp and garlic. Despite the fact that XO refers to premium cognac in China, there isn’t any in the sauce. It is, however, very pricey to make and Vogue China once referred to the sauce as “the caviar of the East”. Luke Dale Roberts of The Test Kitchen, voted the number one restaurant in South Africa for the last three years by Eat Out Restaurant Awards, serves his own bold blend of XO sauce and it’s a great way to liven up bland foods like tofu and a bowl of noodles.

Recently the Wall Street Journal ran a feature on ranch dressing, a tangy, creamy buttermilk and herb salad dressing revered in the US – so much so that research (yes, someone ran stats on this), shows it’s the most popular of all salad dressings at salad bars. As a result, there are umpteen varieties of ranch, including one that goes on everything, and punted as “the new ‘ketchup’”, and others yet, suitable for vegans.

Indian sauces and other loosely labeled “ethnic” dressings picked out by the American National Restaurant Association, a forerunner in food trend forecasting, set out condiments like raita – Indian yoghurt and cucumber salad or dip, Argentine chimichurri – the ubiquitous green sauce served with steak and empanadas, made from parsley, coriander, garlic and chilli, as well as chutneys and soy sauce as consistent favourites that will dominate throughout 2014. 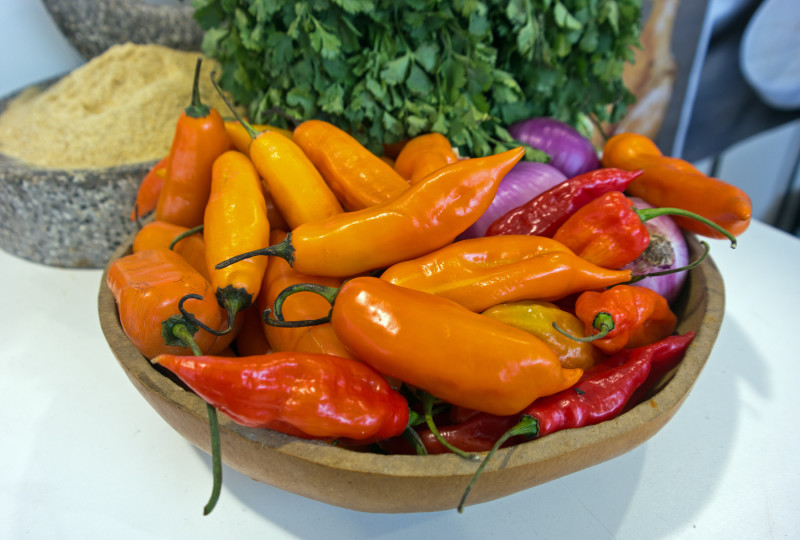 On the way down, and deservedly so, is truffle oil, an artificial condiment which in most instances, isn’t made of truffles. Truffles are a big-deal ingredient in haute-dining -rare and expensive. Made of the chemical compound 2,4-Dithiapentane, a poor truffle taste imitator, somehow truffle oil gained roaring popularity throughout the 90s and 2000s. Chances are you’ve seen truffle oil mash and fries on bistro menus too. While the scent can give a whiff of real truffles in some oils, the taste is more likely to leave you with unpleasant heartburn or reflux. Unless you see shavings of truffle (evident in the price tag of the meal) or the chef has a special house-made oil, give the truffle oil a wide berth.

These are some of our favourite South African sauces, relishes and pickles. Tweet me your best picks @Foodandthefab

1. Dhania (coriander) sauce – gets hotter with each dip, by Quality Pickles. http://qualitypickles.co.za/

2. Mrs Ball’s chutney – sweet, spicy and fruity, one of the most craved foods by South African ex-pats, according to numerous surveys