Is it Halaal? Are we adequately catering for the market in South Africa?

Is it Halaal? The Gap in the South African Restaurant Market

This piece was written for Mango Juice Inflight magazine, November 2013

Notes: this is a complex, multi-layered issue that I investigated over two months. The piece is not meant to be technical and needed to be brief. The more academically accepted spelling halaal is used, though can be used interchangeably with halal.

The term Halal, which means permissible in Arabic, refers to a product that adheres to Islamic law relating to consumption. Halal products are spread across several industries, including food and beverages, cosmetics, fashion and healthcare.

A complex topic, we investigate whether the need for halaal food in South Africa is being adequately addressed. The short answer is, it is not.

“When I was getting married, it was near impossible to find a halaal upscale venue in Cape Town outside of Rylands. Generally, I found it was much easier to find a kosher kitchen than a halaal one,” says Wisaal Andersen (@Wisaal). She adds, “Eating breakfast out is a particular challenge if you want a warm breakfast. Bacon dominates and I’m grateful when they’ll allow me to substitute with avocado or mushrooms but I refuse to pay a surcharge for this”

With an expected 35 percent growth in the global Muslim population over the next 20 years, the need to service the halaal market becomes both a domestic concern and a commercial one from a South African tourism perspective.

According to Fleishman-Hillard Majlis (The Next Billion, The market opportunity of the Muslim world, 2012), the Muslim market is “large, lucrative and underserved”

While the figures are scant locally, Professor Melville Saayman director of the focus area Tourism Research in Economic Environs and Society (TREES), at North-West University is in the process of gathering the South African data. According to him KwaZulu-Natal and the Western Cape are ideal tourist destinations to tap into the emerging demand for halaal-friendly tourism because of the high percentage of Muslims who live there.

Halaal food is relatively easy to find in these destinations, but the options cater for casual eating and take-away food mostly.

“I struggle when I travel,“ says Capetonian Rogeema Kenny (@Rogeema), ”in Johannesburg, it is very hard to find halaal outlets outside Fordsburg and such. I go to Kimberley frequently and it’s the same story. In places we don’t expect to find halaal food we’re used to packing our own.”

Wisaal adds a valid point, “For my parents, halaal means an establishment must be certified halaal, and they’ll ask to see the certificate.”

Halaal, therefore is interpreted differently amongst Muslims too.

She concludes, “I think there aren’t many (fully/certified) halaal restaurants because there isn’t a business case. When I go out with friends, the wine bill is often as much as or more than the food – why would restaurants give up that revenue?”

But is viability the only issue and is it as big a struggle as it seems?

There are several to consider. For restaurants to receive halaal certification from the South African National Halaal Authority and approval from the Muslim Judicial Council (MJC), the prescripts must be stringently adhered to.

Chef Jackie Cameron (@Jackie_Cameron) of Hartford House in Mooi River is always prepared for halaal requests, with a nearby halaal butcher and a stock of halaal meat ‘just in case’. She mentions that gelatin in desserts and wine in sauces are things that can be easily worked around. “I just need guests to let me know so I can order and organise accordingly,” she says.

Sheik Moosa Titus of the MJC suggests that restaurants maintain ‘dedicated areas’ that cater for halaal customers. He illustrates with the example of Thailand where across 78 states one representative body is working with the government to ensure compliance. In South Africa, the equivalent body would be the Untited Ulama Council (UUCSA).

The public, with limited knowledge on halaal requirements, as has been documented extensively, sometimes attach to it a misinformed, negative connotation.

Prof Saayman advises that government needs to develop a strategy or policy addressing halaal food production and export. “This will help the different sectors of the economy to get their ducks in a row. I also think that the certification authorities have to work together in order to get some form of unity,” he says.

The issue is sensitive, the business opportunities are as plentiful are the halaal need, which for now, remains unfulfilled.

What are your thoughts on halaal food in South Africa? 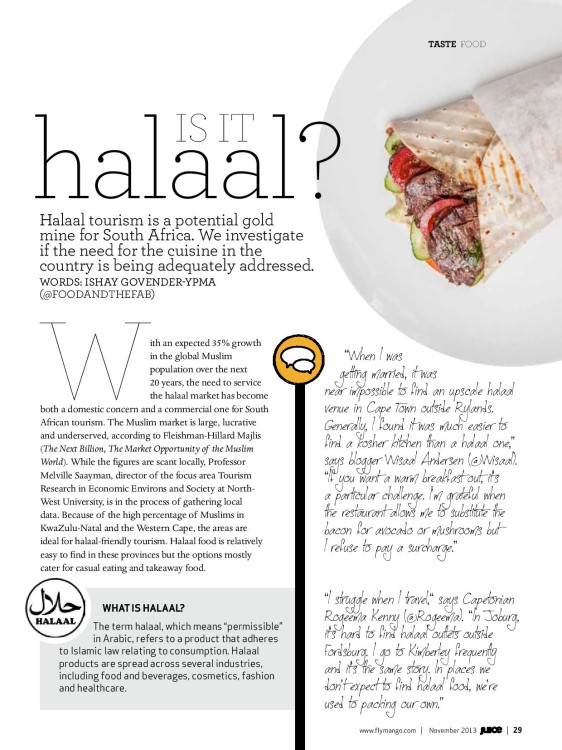 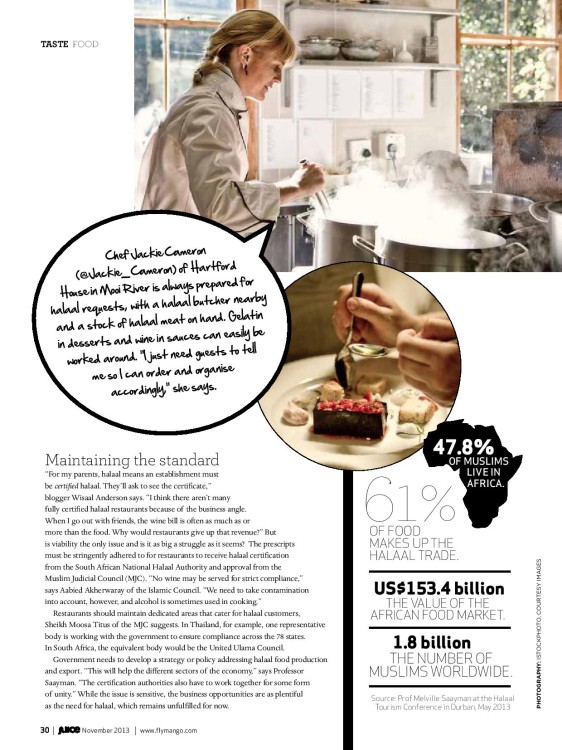