Through storms, sunshine and architectural remnants of a glorious past, Ishay Govender-Ypma discovers what the Pitt-Jolies recently found in Gozo, sister island to Malta in the Maltese Archipelago– a sliver of paradise. For SAA Sawubona magazine, May 2015 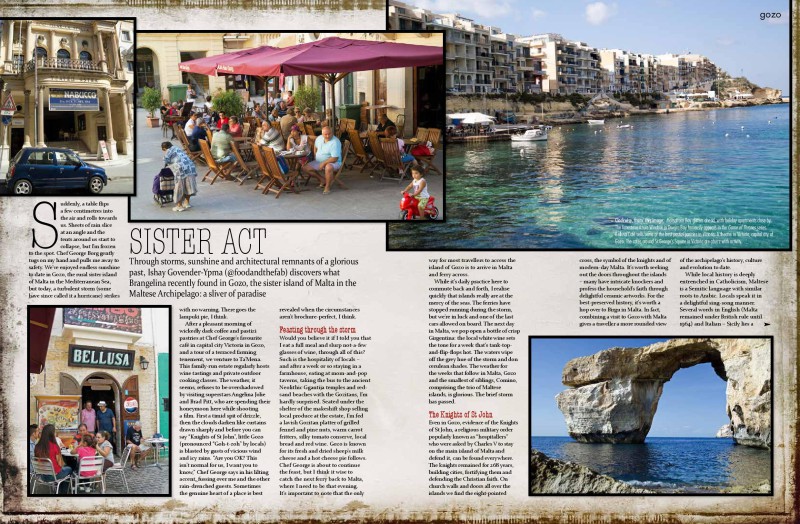 Suddenly, a table flips a few centimeters into the air and rolls towards us. Sheets of rain slice at an angle and the tents around us start to collapse, but I am frozen to the spot. Chef George Borg gently tugs on my hand and pulls me away to safety. We’ve enjoyed endless sunshine to date in Gozo, the rural sister island of Malta in the Mediterranean Sea, but today, a turbulent storm (some have since called it a hurricane) strikes with no warning. There goes the lampuki pie, I think.

After a pleasant morning of wickedly-dark coffee and pastizi pastries at Chef George’s favourite café in capital city Victoria in Gozo, and a tour of a terraced farming tenement, we venture to Ta’Mena. This family-run estate regularly hosts wine tastings and private outdoor cooking classes. The weather, it seems, refuses to be overshadowed by visiting superstars Angelina Jolie and Brad Pitt who are spending their honeymoon, shooting a film in Gozo at the time. First a timid spit of drizzle, then the clouds darken like curtains drawn sharply and before you can say “Knights of St John” little Gozo, pronounced Goh-t-zoh by locals, is blasted by gusts of vicious wind and icy rains. “Are you okay? This is not normal for us, I want you to know,” Chef George says in his lilting accent, fussing over me and the other rain-drenched guests. Sometimes the genuine heart of a place is best revealed when the circumstances are not brochure-perfect, I think to myself. 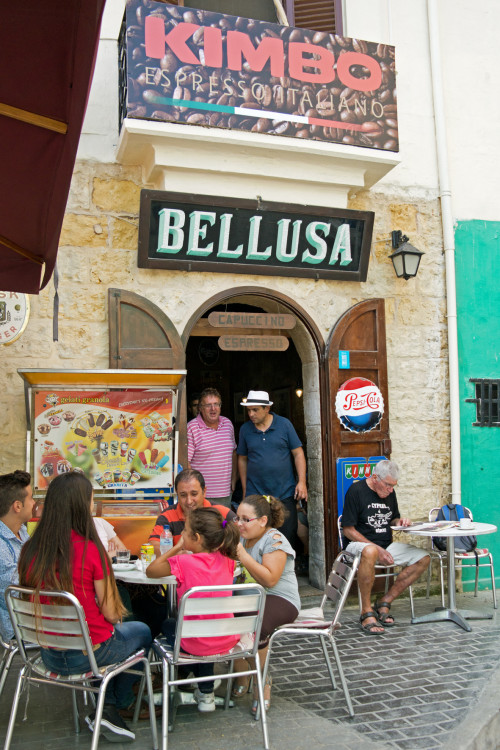 Feasting Through the Storm

Would you believe it if I told you that I eat a full meal, and slurp not-a-few glasses of wine, through all of this? Such is the hospitality of locals, and after a week or so, staying in a farmhouse, eating at mom-and-pop taverns, taking the bus to the ancient Neolithic Ggantija temples and red-sand beaches with the Gozitans, I’m hardly surprised. Seated under the shelter of the make-shift shop selling local produce at the estate, I’m fed a lavish Gozitan platter of grilled fennel and pine nuts, warm carrot fritters, silky tomato conserve, local bread and red wine. Gozo is known for its fresh and dried sheep’s milk cheese, and a hot cheese pie follows. Chef George is about to continue the feast, but I think it wise to catch the next ferry back to Malta, where I need to be that evening. It’s important to note that the only way for most travellers to access the island of Gozo is to arrive to Malta, and ferry across. 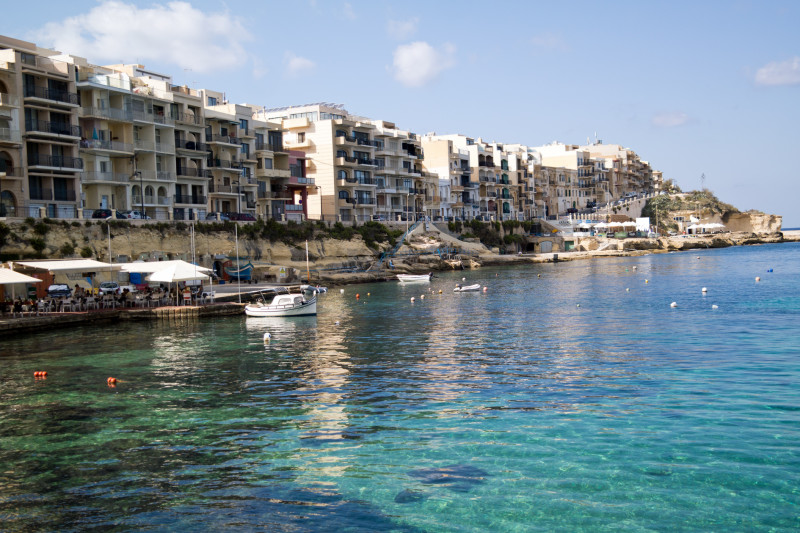 While it’s daily-practice here to commute back and forth, I realise quickly that islands really are at the mercy of the seas. The ferries have stopped running during the storm but we are just in luck and one of the last cars allowed on board. The next day in Malta, we pop open a bottle of crisp Girgentina; the local white wine sets the tone for a week that is tank-top-and-flip-flops hot. The waters wipe off the grey hue of the storm and don on cerulean shades. The weather for the weeks that follow in Malta, Gozo and the smallest of siblings, Comino, comprising the trio of Maltese islands, is glorious. The brief storm has passed.

The Knights of St John 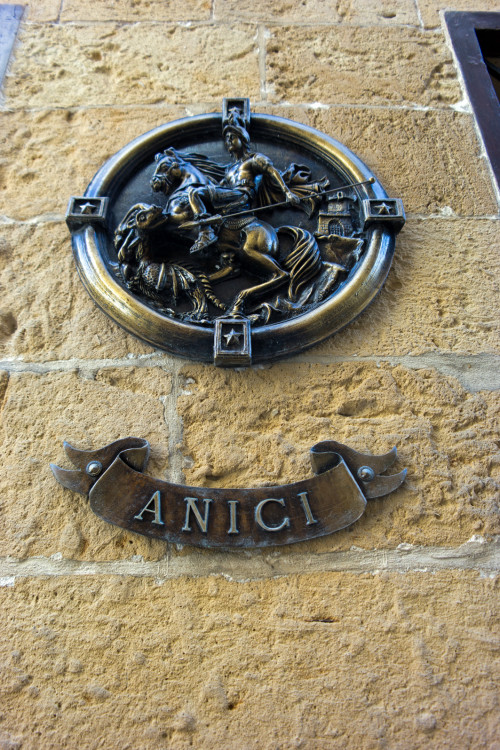 Even in Gozo, evidence of the Knights of St John, a religious military order popularly known as hospitallers who were asked to stay on the main island of Malta and defend it by Charles V, can be found everywhere. The knights remained for 268 years, building cities and fortifying them, and defending the Christian faith. On churches and doors all over the islands we find the eight-pointed cross, the symbol of the knights and of modern day Malta. It’s worth seeking out the doors throughout the islands – many have intricate knockers and profess the home’s faith through delightful ceramic artworks. For the most well-preserved history, it’s worth a hop over to Birgu in Malta. In fact, combining a visit to Gozo with Malta gives a traveller a more rounded view of the archipelago’s history, culture and evolution to date. 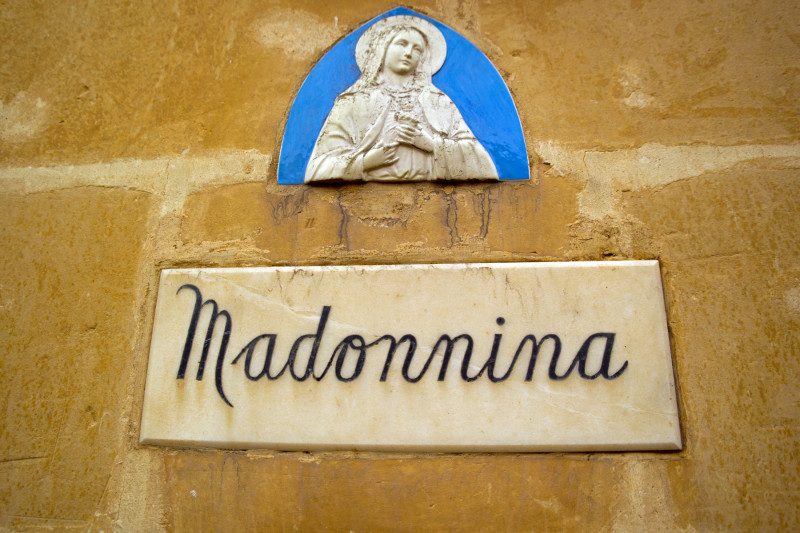 While local history is deeply entrenched in Catholicism, Maltese is a Semitic language with similar roots to Arabic. Locals speak it in a delightful sing-song manner. Several words in English (Malta remained under British rule until 1964) and Italian – Sicily lies a mere 60 kilometers away, have been incorporated. English is the official language too, all across the islands.

There are 360 churches and chapels across the islands and they stand grandly in the centre of even the smallest of towns and villages. Pilgrims from around the world pay homage to the religious historical sites. Many of the churches are works of art, and the St John’s Co-Cathedral in Valletta in Malta stands out with splendid Baroque-style interiors that contrast with the plain exterior. The fortified Citadel in Gozo’s capital, Victoria, provides sweeping views over the city and contains a number of important buildings. The imposing Cathedral of Assumption is accessed up a steep flight of pale-as-straw steps, and on the left side, a narrow cobbled path shelters restaurants and refreshment stops. 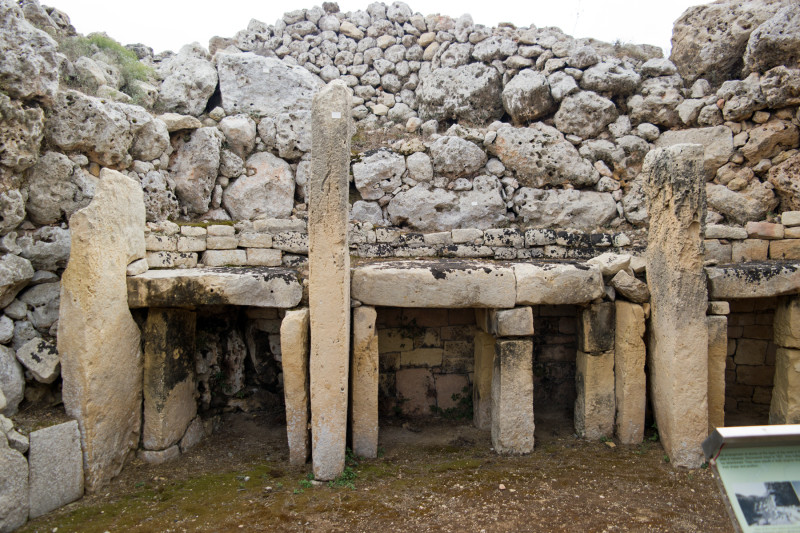 Even in the provincial Gozitan town of San Lawrenz, where I stay in a modern “farmhouse” – essentially a villa with the mod-cons ideal for an independent stay, the church dominates the central square. Here, the tables and chairs of an adjacent restaurant spill out, serving seafood risotto, rabbit stew and grilled fish late into the night, as locals gather meters away to practice a festival dance.

The Ggantija temples in Gozo, the oldest freestanding structures in the world, dated at 3800 BC are a point of pride. The rough-hewn buildings are otherworldly in appearance and you can view excavated artifacts and decorations, giving clues about life of the Maltese ancestors. It’s worth doing a guided tour here.

Of all the temples and churches, my favourite is the 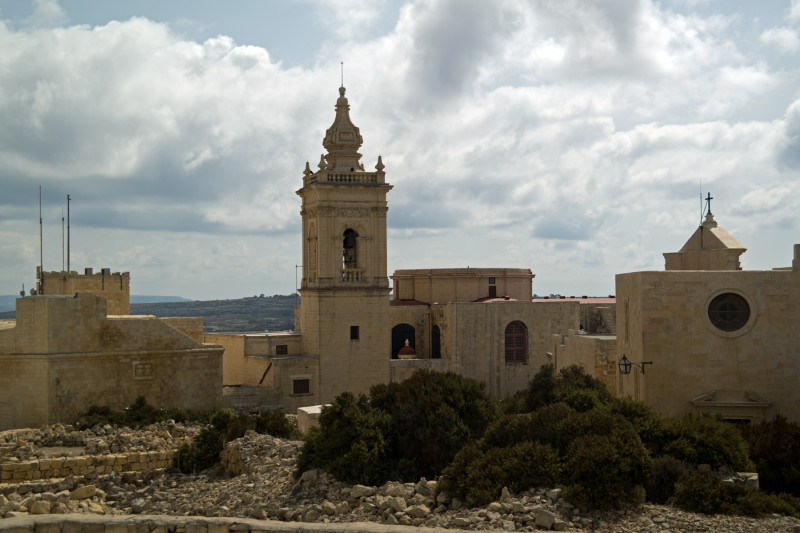 in western Gozo. It rises majestically out of an arid, isolated valley, its latte-coloured stone shimmering in the afternoon sun. 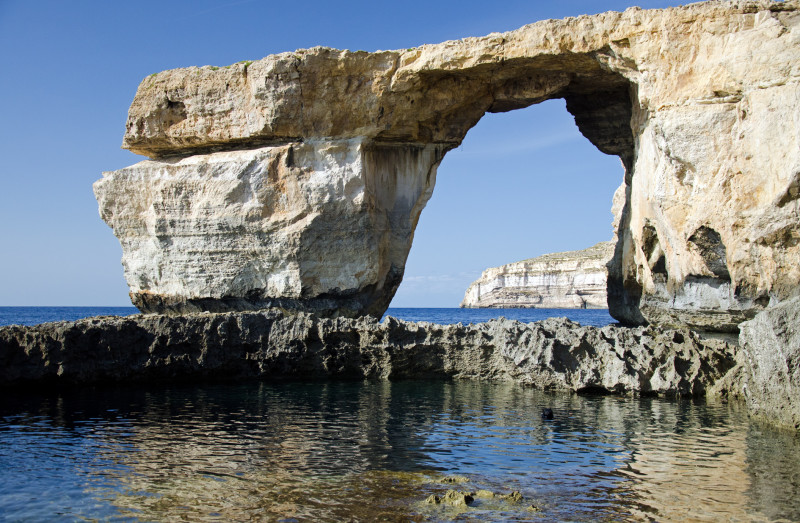 I figure that Brad and Angie are on the island of Gozo for the same reason as all those who have fallen for her charms: the unhurried pace, tranquility, sunshine and pristine waters. A highlight for many visitors is the looming limestone arch, featured in the Game of Thrones series, the aptly named Azure Window in Dwejra Bay. Here you can snorkel, sunbathe, dine on fresh lampuki fish in season, and pose in shameless selfies to your heart’s content.

In Ramla Bay, a small alcove of red sand beach with nearby hiking options, awaits.
I find taking a Segway tour, though I can’t avoid looking like a mall guard, a fun way to explore the coastline at leisure – in the north, all the way from Marsalforn Bay across Xwenji Bay and the glittering Roman saltpans. 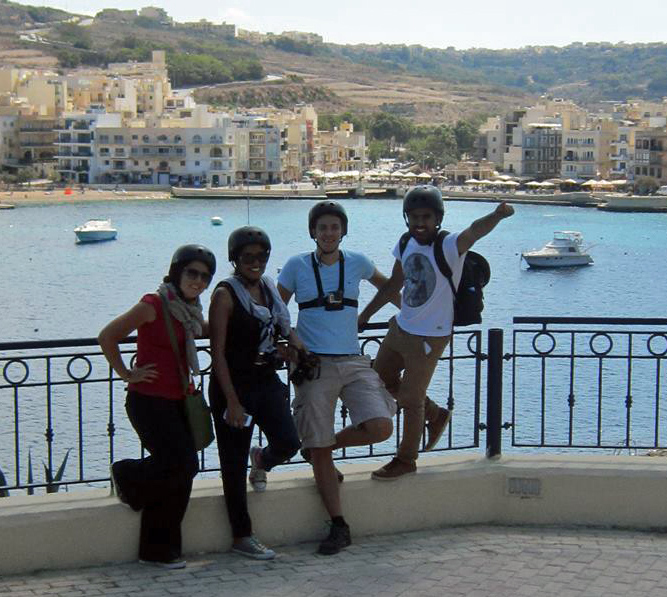 I come to Malta seeking solitude and cultural exploration, but at the airport, as the cab driver shakes my hand warmly, asking when I’ll return, I turn the words of private guide Nicolette Camilleri in my mind: “The best part of these islands? The people, of course.” 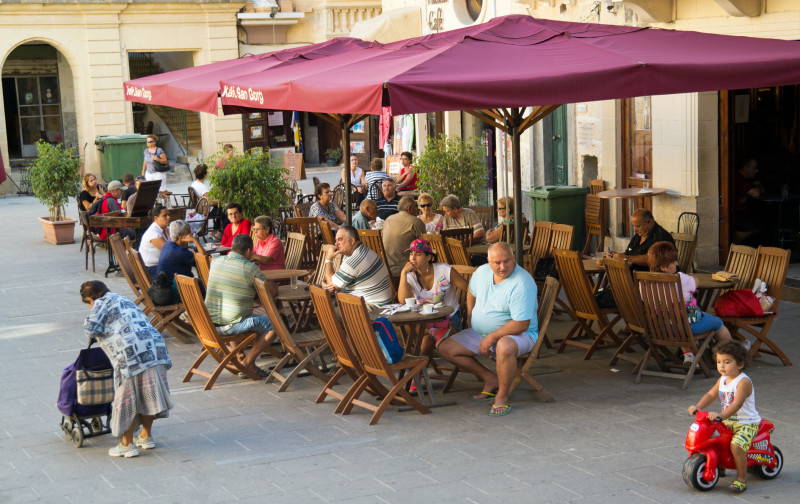 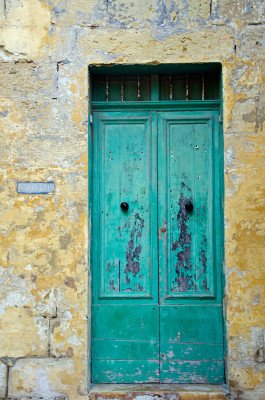 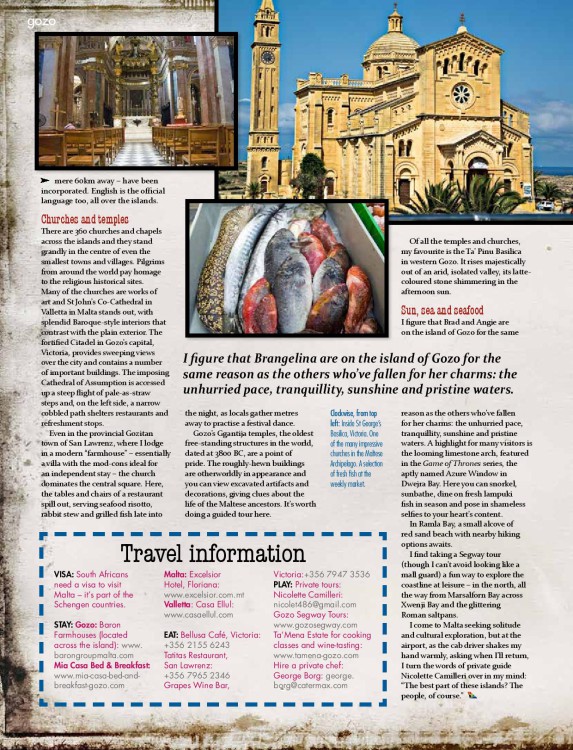 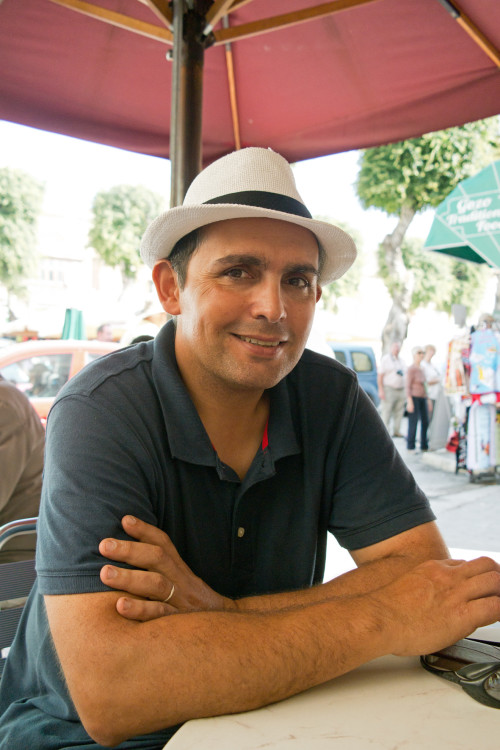 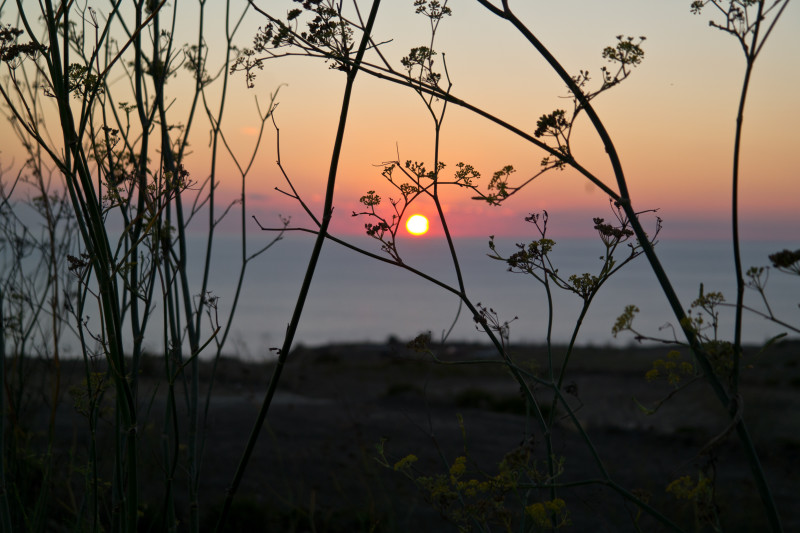 Disclaimer: With thanks to Blog Island Malta campaign in partnership with the Malta Tourism Authority and the support of Air Malta. As always, I retain full editorial control.

Special thanks to Carina, Alexia and fantastic tour guide Nicolette