Mérida Food Guide – a Taste of the Yucatan 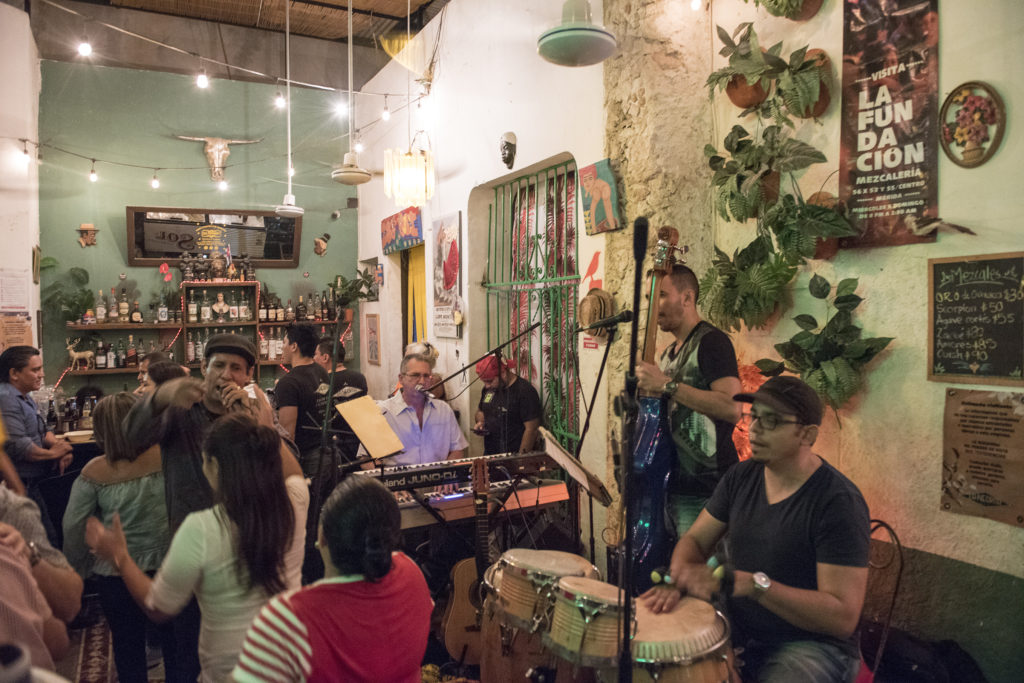 The cultural capital of the Yucatán peninsular, Mérida is a compact city rich in colonial history with cosmopolitan flair and has the region’s broadest span of dining options, from market stalls and mobile kiosks to glamourous dining in lavish haciendas.  Mérida Food Guide, written for Fine Dining Lovers.

The Mayas of the Yucatán

Locals go as far as calling the cuisine of this region Yucatecan and not Mexican, so particular are the flavour-profiles, techniques employed and ingredients used. Naturally, there are similarities and common staples found across Mexico’s provinces. The Maya, who are the indigenous people of this area (most locals possess Maya heritage), have informed the nature of the cuisine to a large extent. It’s also apparent in the names of the foods eaten regularly – like sikil p’aak – a silky pumpkin or squash seed dip, charged-up xni-pec (spicy “dog nose” salsa) and codzitos, rolled tacos that have their roots in the Mayan word “codz”, meaning “to roll”.

The Maya are credited with the discovery of cacao, and along with the Olmecs, for the cultivation of maize, which forms the backbone of the diet and is used in making masa, corn flour dough from which countless tortilla-based iterations are fashioned from the nixtamalised product.  The Maya’s early diets consisted of squash (they used the nutritious seeds too), butteryavocadoss (native to Mesoamerica), chaya (a wild spinach), tomatoes, chilli, guava, pineapples, papaya, soursop, epazote (a strong-tasting herb), annatto (from which rust-orange achiote paste is made) and various spices.  These ingredients are also used widely today. 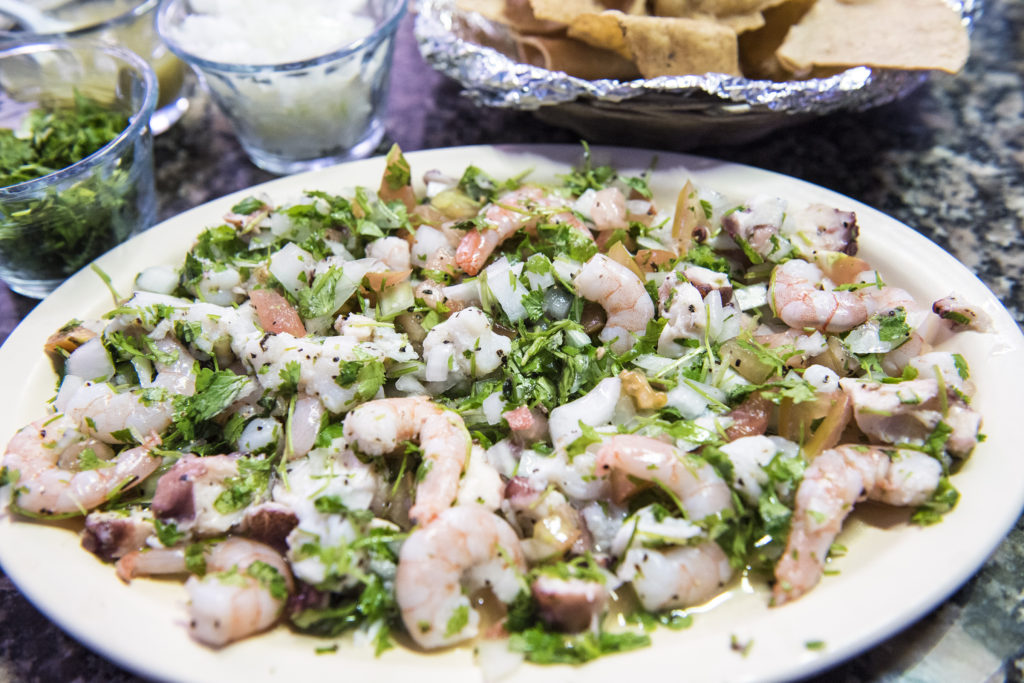 As far as popular food culture goes, cochinita pibil should be numero uno on your list. It consists of tender suckling pig rubbed with achiote paste, chilli and marinated with sour oranges, covered in banana leaves and traditionally slow-roasted in a pit underground and then shredded over tacos. It’s made with pollo (chicken) too. Historically, this technique was employed to preserve meat.  The method of roasting or smoking foods underground in “p’íib” or ovens, along with the use of achiote, habanero and citrus – sour oranges usually, instead of limes – forms the cornerstone of the Yucatán kitchen.

It’s vital to note that contact with conquerors, colonisers and those passing through the region has left an indelible print on the cuisine today. The late chef David Sterling in his vital work Yucatán – Recipes from a Culinary Expedition, explains: “The Spanish and Portuguese brought the art of sausage-making; the Spanish brought pickling techniques; the French introduced fine baking; and centuries later, the Lebanese brought spit-roasting.” The Dutch, my guide Rubén Vargas of Adventures Mexico informs me, introduced wheels of Edam cheese, still used today. I spot the compact red wax-covered Edam cheese rounds all over the market and enjoy some grated in marquesitas at the Plaza Grande on a Sunday, when the streets are closed to accommodate the market. These ubiquitous market and fairground snacks consist of hot, paper-thin crunchy wafers, made-to-order and filled with grated Edam or Nutella (and sometimes both, I’m told). It’s strange but satisfying to enjoy a familiar taste in a different presentation. 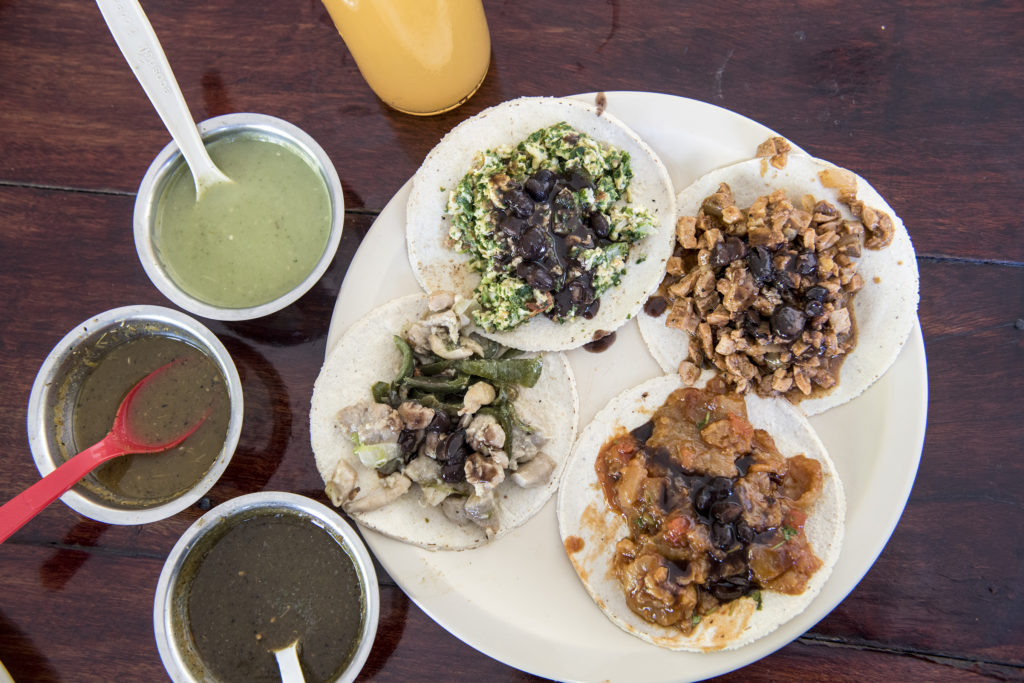 Tacos for Breakfast; Drinks before Dinner

At Wayan’e, a Mérida institution that opened in the early ‘90s, I try a range of tacos for breakfast from cochinita pibil to scrambled eggs with chaya, chicharron y castacan (pork belly with crackling), and castacan y queso (pork belly with fresh cheese) and pollo pablano. The wee tacos come in single servings and are the ideal way to sample a large range of Yucatecan flavours for a few pesos, in bite-size portions.

At the market at Santiago Park, in spite of the heat, I follow the locals’ lead and order a large bowl of sopa de lima – fragrant shredded turkey and lime soup with finely-sliced fresh tortillas, as well as salbut de relleno negro (puffed deep-fried tortillas with shredded turkey [or meat] in a black sauce) and empanada (dough pockets) stuffed with cheese and chaya.

In Merida, drinks before dinner are encouraged and the best places to catch the action with a pitcher of mezcal and a round of free snacks are at the swing-door cantinas like La Negrita Cantina or La Fundación Mezcaleria where the younger folk gather. It’s loud, packed, and the antidote to days when you’re feeling the “small city” blues. For a more sophisticated option, restaurant Apoala’s “secret” speak-easy, Malahat which you’re guided to, behind a parking lot, is an intimate space with bespoke cocktails crafted while you watch. Book through the restaurant and they’ll escort you back to dinner under the stately colonnade adjacent to the lively Parque de Santa Lucía square when your table’s ready. The ultimate in Yucatecan fine dining can be found at K’u’uk (the Mayan word for sprout), which serves an impeccable 13-course tasting menu dedicated to ingredients, techniques and flavours of the region in an elegant hacienda with lavish rooms. If you have the stamina, end the night back at La Fundación which stays open later than the other cantinas, and by this time everyone’s jamming on the dancefloor too. 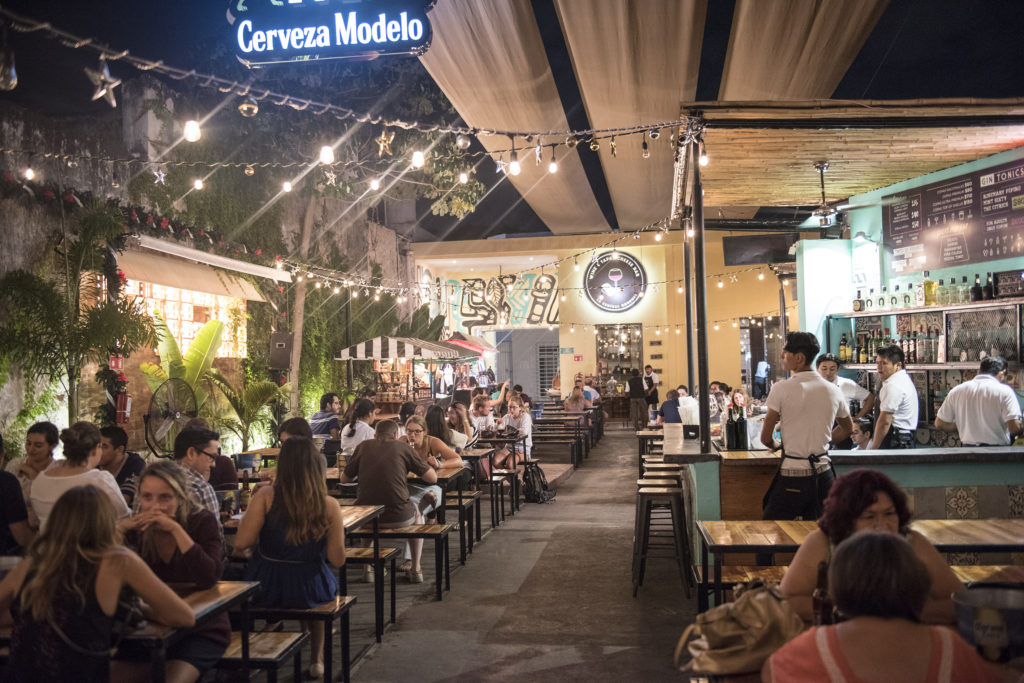