Chef Jan Hendrik van der Westhuizen, owner of JAN in France, is the first South African to be awarded a Michelin star. Ishay Govender-Ypma (@IshayGovender) chatted to him on his recent visit to South Africa. For Fine Dining Lovers, April 2016. 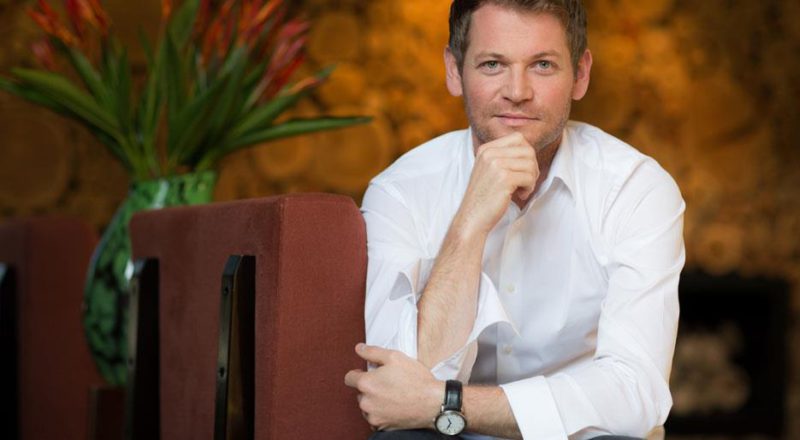 Jan Hendrik van der Westhuizen (33) is the first South African chef to be awarded a Michelin star. His eponymous restaurant, JAN in Nice, France, which opened in 2013 pays homage to his South African heritage and as well as his flair for design and layout. Prior to opening JAN, van der Westhuizen, who has a degree in applied design and photography, worked for Elle Magazine in both his native country and Paris, and as a private chef on luxury yachts.

JAN, which was awarded one of the best restaurants in the world by Conde Nast Traveler in 2015, serves, in van der Westhuizen’s words: “modern French with a touch of South African soul”. Expect the menu to include mosbolletjies (a brioche-style Afrikaner bread made with fermented grape juice and aniseed), koeksisters (a syrupy, crisp plaited fried pastry) and an extensive South African wine list. Van der Westhuizen spent his childhood on his family’s farm in the north of South Africa where he learnt to cook from his mother and grandmother, both of whom he honours in his cookbooks. The release of his second book, JAN: A breath of French Air (Struik Lifestyle) which documents 90 of the recipes prepared at JAN and sets out his signature aesthetic, coincided with the announcement of the star.

Van der Westhuizen says he was in the kitchen when he received the call that was meant to announce the star. “I said to the Maître d’ to take a message as we were busy. I called the number back very late that evening from my car in the parking lot,” he says.  “I did not think we would get a star. At least not so quickly.”

He arrived in South Africa immediately after for a month of book tours and full-capacity events in March. “JAN getting a star is good news for my people back home. They cherished it and I love them for the insane welcome I got on a recent trip back home,” he says. While van der Westhuizen co-owns JAN with business partner Pascal Szafranski, he says that he retains full control over the food, service, concepts and the interior of the restaurant. “My new chefs from South Africa play a big role too. They are very creative and love to shift the boundaries which is great in a small team like ours,” he shares.

While he concedes to having a short attention span and therefore likes to “constantly change things” with JAN’s décor and menu, the key to van der Westhuizen’s rapid success he maintains, is to be surrounded by positive, creative people. “This is essential. These are people who also understand that we don’t take short cuts and we need to push our boundaries,” he says.

“I do sometimes lose touch with the practical and focus on the aestheics. However, design has changed the way I look at things. It’s more about the actual process than the end-product,” he explains.

For young chefs aspiring towards a Michelin star, van der Westhuizen has four pieces of advice to offer: start with what you know, embrace the seasons, don’t give up after a bad review and “drinks lots of coffee”.

“Time and place have always been a huge guideline in my career,” van der Westhusizen says, ”We plan to continue to work as had as we always have.”