A Salad for a Beloved Octopus

A Salad for a Beloved Octopus

This post is featured on Spain World Cup Blog, and you can read it here: http://spain.worldcupblog.org/world-cup-2010/ode-to-pulpo-paul-a-culinary-homage.html and The OffSide’s Daily Dose: http://www.theoffside.com/daily-dose/daily-dose-october-27th-2010.html 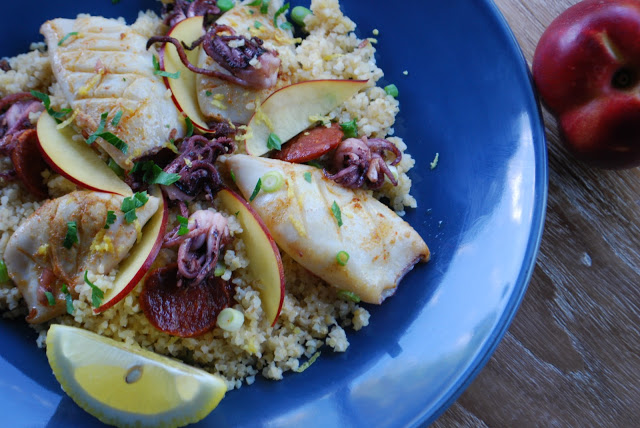 Dearly beloved, today the world lays to rest our darling multi-armed Paul. One of possibly 57 700 eggs, laid by his mother at the Sea Life Centre, in Dorset, England, Paul hatched in roughly January 2008.

Clearly, he had no allegiance to the British and found his way (by capture) to the Sea Life Centre, Oberhausen in Germany.

This was no random act, as you will agree Paul was no ordinary mollusk –evolving octopus.

Highly intelligent, and blessed with powers of The Oracle, Paul spent his time leisurely sampling mussels, in preparation for his greatest and finest moment!

Yes, it’s true, our belated Paul, predicted the many victories during the UEFA 2008, failing to point out Germany’s loss to Spain. Of course, how could he bite the tentacle that fed him? Instead, Paul tactfully and patiently waited…..

The pinnacle of Paul’s career, and life, arrived in July 2010 when he predicted Spain’s victory over the stroopwaffel eaters in the ultimate tournament of tournaments- the Football World Cup Final!
At that very moment, Spanish (and Spanish-loving) lasses (and lads) the world over, knew that Paul the Great Oracle, had orchestrated his capture, had endured his 2 years and 9 months in German water, to remain objective and slay the naysayers…for he knew: La Victoria Será Nuestra! (Victory shall be ours!)

Paul had in the months since the World Cup been inundated with fan mail, marriage proposals and donations, the latter of which have been used to build a permanent sea turtle rescue centre on the Greek island of Zakynthos. Bless his squidgy soul!
Dearly beloved, weep not, for Paul lived a good life and passed on in his sleep, peacefully.

(But not before predicting the winning results for World Cup 2014- I am willing to take all sorts of bribes for this information. Meet you at the Squid Salad at the Wake….)

First, may I reassure the squeamish and extra sensitive- I understand you may feel an octopus dish would be in poor taste. I agree. So instead, I grilled Paul’s cousins the squid. Feel free to substitute with octopus once the official days of mourning are over.

In honor of Pulpo Paul!

(Squid is commonly known as calamari in South Africa and is on SASSI’s (http://www.wwfsassi.co.za/?keyword=panatgonian+squid&m=sitesearch&online=&application=&s=) green list- so enjoy a plenty!)

Sprinkle cumin and paprika over squid bodies and add lemon oil, mix to cover.
Fist fry the chorizo for 30 seconds each side in anon-stick pan on medium to high heat. Remove and set aside. You will be left with a glorious fiery coloured chilli oil.
Add the squid to this and fry on medium to high heat for 40seconds a side or thereabouts. The trick is high heat and quick cooking, or else the squid will become tough and horribly inedible.
Remove and set aside.
Now add the squid heads and garlic to the hot pan and fry for 30 seconds or so in total, stirring around so the garlic doesn’t burn.
Season according to taste.
Assemble by laying the squid, squid heads, chorizo, spring onions and nectarine slices over the quinoa. 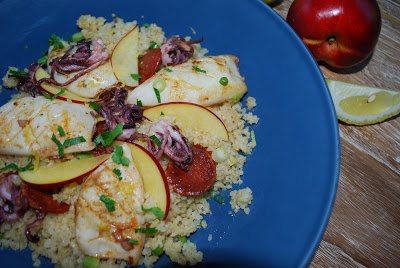 *Should you have an issue with the parody, please feel free to squirt squid ink all over your screen!
For more info on Paul, please visit: